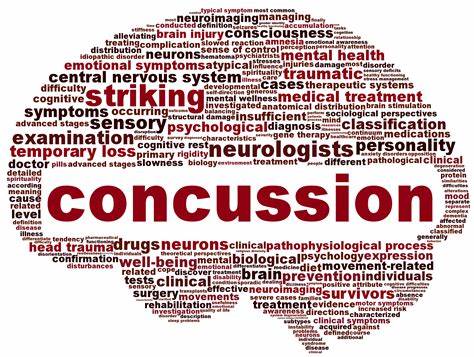 On a crisp September day, Zoe Aldrich walked onto a rugby pitch on a college campus in upstate New York. With her teammates surrounding her, she got ready for the kick-off and the pitch became a blur of coloured jerseys.

A teammate passed Aldrich the ball and she started running, but an opposing player tackled her to the ground. Players collided above her, competing for the ball. As Aldrich tried to crawl out from under them, one of her teammates accidentally kicked her in the head. “I never lost consciousness,” she says, “but I didn’t feel well.”

Trainers diagnosed her with a concussion and for the next year and a half, Aldrich suffered from a feeling of fogginess as if her brain wasn’t working correctly. People told her she would feel better in two weeks, then four, then six.

Eventually, she says, “I had to give up on this notion that I had to wait a certain number of weeks and then things would go back to normal.”

Each year in the United States, there are around 3.8 million concussions, and sports – and recreation – related activities are responsible for a significant number of them. Most patients experience symptoms similar to Aldrich’s: headaches, nausea, fatigue, dizziness and memory loss.

There is no single test to diagnose a concussion. instead, doctors examine balance, coordination, ability to pay attention and memory. If the symptoms are severe, they’ll also conduct brain scans to check for swelling or bleeding.

For around 80 per cent of patients, symptoms go away within two weeks. But others, like Aldrich, experience symptoms for months or even years. A history of multiple concussions may increase the risk of more serious problems later in life, including Alzheimer’s disease and chronic traumatic encephalopathy, or CTE, a neurodegenerative disorder with dementia-like symptoms.

Although it’s clear that concussions damage the brain, exactly how they do so is still largely a mystery – especially when it comes to long-term problems. An intriguing new clue focuses on tiny tubes sandwiched between the meninges, a set of membranes that surrounds and protects the brain and spinal cord. These tubes, called meningeal lymphatic vessels, help to clear cellular and molecular waste from the brain.

A mouse study published in September in the journal Nature Communications reported that after minor blows to the head, the brain swells and pins these vessels up against the skull. Like putting a kink in a hose, this diminishes their ability to drain properly.

This damaged drainage system, the researchers speculate, may be what leads to more severe and longer-lasting symptoms.

“We know that most of the time, a concussion is a limited process. Most people recover and don’t have long-term effects,” says Ann McKee, a neuropathologist who directs Boston University’s CTE Centre and was not involved in the study. But in autopsies of people who had suffered from CTE during their life, McKee has found scarring in the meninges.

“The idea that meningeal lymphatic channels may contribute to inflammation and persistent symptoms, I think, is a very interesting idea – it makes a lot of sense to me.”

The existence of lymphatic vessels surrounding the brain was confirmed only recently – in 2015 – but scientists have long known that they exist elsewhere in the body, mingled among the veins and arteries that supply oxygen and nutrients to tissues and organs.

This network of tiny, thin-walled tubes acts as the body’s molecular trash collection system. The vessels collect the clear fluid called lymph that leaks from the bloodstream – filled with immune cells as well as proteins and molecular debris. These are transported to lymph nodes, small structures throughout the body that filter out the harmful waste.

The lymphatic system is a web of tiny, thin-walled vessels mingled among the veins and arteries throughout the body. These tubes act as the body’s molecular trash collection system: They transport a clear fluid called lymph that leaks from the bloodstream to lymph nodes, which filter out harmful waste.

In the eighteenth century, Italian physician Paolo Mascagni created a detailed atlas of the lymphatic system and depicted these vessels in the meninges around the brain. But other scientists dismissed the idea, arguing that the lymphatic system was completely separate from the central nervous system. That remained the consensus for more than 200 years.

Then, in 1996, scientists looking at brain tissue with an electron microscope discovered structures in the meninges that looked like lymphatic vessels. Other researchers still weren’t convinced, writing off the tubes as capillaries, which are also thin-walled vessels.

Finally, in 2015, neuro-immunologist Jonathan Kipnis, now at Washington University in St Louis, and his former colleagues at the University of Virginia examined the brains of mice and uncovered a web of channels that resembled the lymphatic vessels found in the rest of the body.

To confirm that the tubes were not blood vessels, the scientists sacrificed the mice and removed their meninges, which they then stained with fluorescent molecules that bind to lymphatic cells, revealing meningeal lymphatic vessels.

These vessels, which have since been found in other animals, including people and other primates, drain waste from the brain to a set of lymph nodes located next to the jugular vein in the neck.

Before this discovery, scientists weren’t sure how the brain disposed of waste after an injury. Following a significant hit to the head, brain cells die, releasing molecules that initiate inflammation and signal the immune system to clean up the damage.

Inflammation immediately after an injury can help in the recovery process. But animal studies have shown that a flawed immune response can lead to chronic inflammation, which ultimately causes more cell death, damage to the ability of neurons to communicate, and other long-lasting neurological issues.

Kipnis thinks that the brain’s waste pathway might play a role in degenerative diseases like Alzheimer’s, where cell-damaging molecules called amyloid-beta accumulate between neurons and are not properly cleared. Over the past five years, he and his team have discovered that damage to the lymphatic vessels in mice increases the accumulation of amyloid-beta in mouse brains.