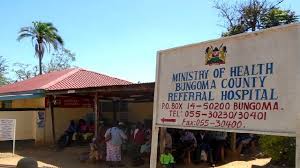 While significant gains have been made in the fight against HIV-related stigma and discrimination, prejudiced attitudes still hold back people in rural Kenya from accessing healthcare services.

Cultural inhibitions are still at play in the war against sexually transmitted infections (STI) and access to reproductive health services, further multiplying the hurdles national and regional governments face in the provision of timely interventions.

The phenomenon is documented in Mt Elgon Sub-County in Bungoma in Western Kenya, where a non-governmental organisation Ace Africa Kenya, in partnership with Ampath Plus is involved in Linkages Project for the Key Population.

Linkages Project that has been expanded geographically to cover the entire Bungoma county with a population of two million people – based on 2019 census – does awareness creation by offering voluntary counselling and testing (VCT) services.

Instructively, Bungoma is frontier county with a cosmopolitan population – some transit – because of its proximity to Uganda in the west. It also serves as an entry point for goods and services from Uganda, Rwanda, Burundi, the Democratic Republic of Congo (DRC) and South Sudan.

With a significant transient population that gives this part of Kenya the character of “people state of flux”, medical workers say both the resident and migratory groups are exposed to high HIV and STI infections, hence the need to for urgent interventions.

Linkages Project thus provides education for sex workers on safer sex practices that includes condom use and periodic testing for sexually transmitted infections. It also reaches out to other clients, usually truck drivers, public service vehicle crews, small-scale business owners and hawkers. They are viewed as they most vulnerable population.

Dr George Murutu, who is based at Kapsokwony Sub-County hospital in Mt Elgon, says that despite the facility recording high STI incidents, there is limited prevention and surveillance due to cultural barriers among the population.

Despite the first HIV incident being n reported in Kenya in 1981, nearly 40 years on it is still hush-hush subject with a significant number of people who hold onto the superstition that the disease is passed on by witchcraft and other inexplicable supernatural powers.

“There is still low awareness and widespread misconceptions about HIV. Those who are sick would rather visit a witchdoctor than come to hospital for treatment. These factors, combined with inadequate healthcare services in this part of the country create a fragile situation susceptible to the rapid spread of HIV in the subcounty,” Dr Murutu explains.

The situation is so serious that members of the Key Population are forced to make a two-kilometre trek to Kimilili town to access sex-related healthcare and reproductive health services, despite the same services being available at Kapsokwony free of charge.

“There are incidents where people just disappear because they tested HIV positive. In this region, people ‘don’t engage in sex work’. If caught, not even the police can protect you,” said a resident and member of the Key Population who requested not to be named in this article.

Dr Murutu attests that several people in the rural community had been personally affected by HIV: some were HIV-positive, others had nursed HIV-affected relatives. Local primary healthcare centre staff reported that an average of 10 STI cases from the subcounty were detected ever month.

This is where the Linkages programme comes in: to strengthen the health system to deliver quality services such as capacity building of the healthcare workers, volunteers and community leaders.

While Dr Murutu refers 8-10 patients a year for HIV testing, another healthcare worker Dickson Juma says he does not refer clients suspected to be HIV-positive for testing for fear of being accused “of spreading rumours.”

Incidents HIV and other STI patients attacking healthcare workers on suspicion leaking their status are not uncommon, says Mr Juma.

Juma, who is Ace Africa Linkages Programme Coordinator, says most people are knowledgeable about what causes HIV and its mode of transmission. However, they are still reluctant to talk openly about it because of the stigma attached to it.

“Discrimination can manifest in local criminal laws that give license to aggressive enforcement, harassment and violence, pushing key populations to the margins of society and denying them access to basic health and social services, including HIV services. So, people would rather keep things hushed until they die,” he observes.

The situation is worse in the case of MSM (Men who have sex with Men, also known as homosexuals) or LGBT (lesbian, gay, bisexual and transgender), who are forced to travel outside the subcounty to access free reproductive health services offered by Ace Africa.

“We have recruited members of MSM there but we have kept it a secret because if found out, they could lose their lives,” Juma reveals.

Discriminatory laws and policies such as the criminalisation of sex work, drug use, sexual orientation or gender identity contribute to and reinforce low levels of access to health services.