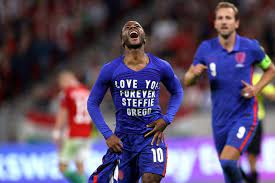 Raheem Sterling was pelted with objects and racially abused as he scored in England’s 4-0 rout of Hungary in their World Cup qualifier.

A slow first half was followed by a ruthless second as Gareth Southgate’s side put behind them the disappointment of the Euro 2020 final, but the game was marred by the behaviour of the fans in the Puskas Arena.

Man City star Sterling put the Three Lions ahead in Hungary ten minutes after the break and proceeded to celebrate by the corner flag. The home fans, who booed the England players for taking a knee before kick-off, threw bottles, cups and other objects at Sterling as he celebrated.

The winger took off his shirt to reveal a message to friend Steffie Gregg, who died aged 26 a few days ago. The text on his undershirt read: “Love you forever Steffie Gregg.”

Declan Rice then also appeared to drink from one of the cups that had been thrown by the crowd as his teammates continued to celebrate.

The goal was not unexpected as Gareth Southgate’s side enjoyed the bulk of the possession in the first half, but lacked any real cutting edge. The Three Lions clicked into gear after the break, starting with that Sterling goal.

TalkSPORT’s commentator Jim Proudfoot said: “Finally England have the breakthrough. As the ball was played down the left, it was pulled back for Raheem Sterling, who was able to side foot the ball into the bottom corner.

“He whips off his England shirt to show a blue t-shirt with a white message on it. As he walks across to the Hungarian supporters, there is a rain of missiles coming down from the fans towards him.”

England doubled their advantage in the 63rd minute as Sterling turned provider. A poor Attila Szalai pass was cut out and played onto Mount, whose first-time flick onto the forward was followed by a cross for Kane to head home. England then firmly put the result beyond doubt by going 3-0 up in the 69th minute.

Missiles were aimed at Luke Shaw as the England left-back prepared to take a corner, but he continued undisturbed and crossed for Maguire to power in a header that Gulacsi could not keep out.

ITV’s Gabriel Clarke also confirmed that Sterling and teammate Jude Bellingham had been subject of racist abuse during the match.

Fans behind the goal England were attacking were heard making monkey chants at the two players during the second half.

England then made it 4-0 in the 87th minute as Grealish played back to Rice, whose low drive squirmed through Gulacsi’s grasp.

The win was vital for the Three Lions as they attempt to qualify for the 2022 World Cup without much hassle, keeping them top of Group I with 12 points from four games.