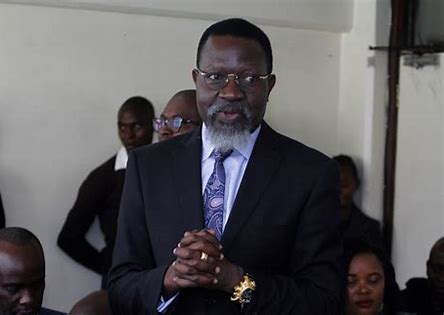 Presidential candidate who promises to legalise cannabis, export snakes is stealing the show in Kenya

Less than three weeks before Kenya holds a presidential election, analysts say the unexpected, growing popularity of one candidate could deliver some unpredictability to the outcome. George Wajackoyah ranks a distant third behind front-runners Raila Odinga and William Ruto.

But according to one poll, his platform to legalise marijuana and export of hyena testicles is winning him massive support among the youth and the poor.

Wajackoyah and another candidate, David Mwaure, are political newcomers in Kenya.

Opinion surveys indicate that Wajackoyah is highly unlikely to win the August 9 election. But his approval among Kenyans is rising. One recent survey by Trends for Insights Africa showed he had an approval rating of 7 per cent, which would translate to roughly 1,589,000 votes of the 22, 152 144 registered on election day.

The leading candidates, former Prime Minister Odinga and current Deputy President Ruto, are far ahead at 50 per cent and 25 percent respectively. But Wajackoyah’s seemingly small number of votes could affect the outcome, possibly by denying Odinga a majority or Ruto the votes and force a runoff.

“In terms of affecting the election, I don’t think he will affect it to the extent where he will cause a runoff,” Bichache said, “but he might cost William Ruto some votes because he is targeting the same audience as William Ruto does.”

Wajackoyah’s unexpected popularity, analysts say, comes from his campaign pledge to legalise outlawed cannabis in Kenya. He ahs also promised to suspend the constitution for six months to have the leeway in dealing the economic saboteurs. Corruption is Kenya’s biggest problem and it is felt there is a general reluctance to dela the economic vice.

In a telephone interview with VoA, the professor of law-turned-politician said he wishes to position Kenya as a dominant player in the antivenom market and said he would encourage snake farming to help pay off Chinese debt.

Despite his polling numbers, Wajackoyah said he was confident of winning the election outright.

“I’m not going to cause a runoff because I’m the one winning this election,” he said, “so the issue of a runoff does not make sense to me.”

Wajackoyah’s agenda is attractive to many voters, especially young ones. Policy and governance analyst Gabriel Muthuma said Wajackoyah’s message has found an appeal with some voters.

“He has introduced us to his narrative of marijuana, snakes, snails and hyenas and to a certain level has been able to have a crowd who kind of think the same as him and believe he has something to offer,” Muthuma said.

Kenya’s election law requires that a presidential candidate win more than 50 per cent of the national vote to be declared the winner. The August election will be Kenya’s third under the constitution established in 2010.

Cameroon’s war economy: ‘This is no longer a struggle for the common man, but an economic venture’

He’s not at sell-by date, why Arsenal loan returnee Saliba has Gunners’ fans cooing over the centre-back