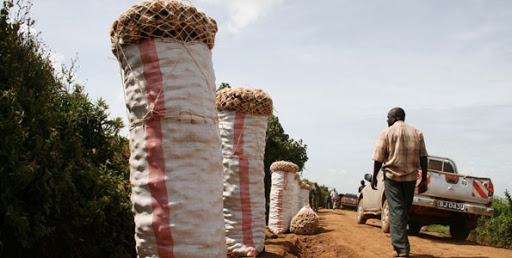 Nyandarua County is expected to turn to culture of Irish potatoes to improve the quality and quantity of potato production as Kenya looks to narrow the burgeoning food deficits.

This modern farming method will see potato plantlets develop under specialised conditions to reduce infection by diseases, thereby increase food supply in a country that relies on maize and rice as staple food.

Nyandarua Governor Francis Kimemia says the shift would see potato farmers double their harvest compared with what they usually get from on-farm recycled tubers.

The governor points out that potatoes are susceptible to various diseases that lowered yields and tuber quality, hence the need to constantly renew supply of disease-free planting material.

“We have a machine that was donated to us by a European government that has also pledged to help in micro-propagating potato plantlet and multiplying disease-free plants that can then be used to produce healthy seed tubers for farmers,” explains Kimemia.

“Soil health is the foundation of better agricultural production, so there is no way we can have better yields before addressing the deterioration of our soils. You don’t have to go far to have your soil tested as our agricultural field extension officers will be all over the county to take soils samples for testing,” Kimemia explains.

The governor called on the County Assembly to consider reintroducing Guaranteed Minimum Returns (GMR) to offer farmers loans for cultivation that would be repaid after harvest.

“The GMR loans were introduced by Jomo Kenyatta as a way of enhancing food security back then where farmers were offered with loans that were repayable after harvest,” added Kimemia.