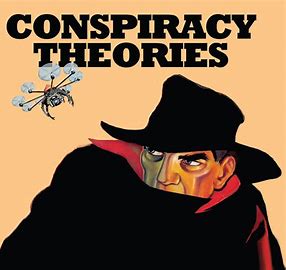 Politics and conspiracy theories: A way for losers to channel their anger, close ranks and regroup

Conspiracy theories seem to meet psychological needs and can be almost impossible to eradicate. One remedy: Keep them from taking root in the first place.

The United States of America was founded on a conspiracy theory. In the lead-up to the War of Independence, revolutionaries argued that a tax on tea or stamps is not just a tax, but the opening gambit in a sinister plot of oppression.

The signers of the Declaration of Independence were convinced – based on “a long train of abuses and usurpations” – that the king of Great Britain was conspiring to establish “an absolute Tyranny” over the colonies.

“The document itself is a written conspiracy theory,” says Nancy Rosenblum, a political theorist emerita at Harvard University. It suggests that there’s more going on than meets the eye, that someone with bad intentions is working behind the scenes.

If conspiracy theories are as old as politics, they’re also – in the era of Donald Trump and QAnon – as current as the latest headlines. Earlier this year, the American democracy born of an eighteenth-century conspiracy theory faced its most severe threat yet – from another conspiracy theory, that (all evidence to the contrary) the 2020 presidential election was rigged. Are conspiracy theories truly more prevalent and influential today, or does it just seem that way?

The research isn’t clear. Rosenblum and others see evidence that belief in conspiracy theories is increasing and taking dangerous new forms. Others disagree. But scholars generally do agree that conspiracy theories have always existed and always will. They tap into basic aspects of human cognition and psychology, which may help explain why they take hold so easily – and why they’re seemingly impossible to kill.

Once someone has fully bought into a conspiracy theory, “there’s very little research that actually shows you can come back from that,” says Sander van der Linden, a social psychologist at the University of Cambridge whose research focuses on ways to combat misinformation. “When it comes to conspiracy theories, prevention is better than cure.”

To investigate how conspiracy beliefs have changed with time, Uscinski, Parent and a small army of research assistants analysed more than 100,000 letters to the editors of the New York Times printed between 1890 and 2010. Among these, they identified 875 letters that dabbled in conspiracy talk – that some group was acting in secret to steal power, or bury the truth, or reap some other benefit at the expense of the common good.

Many of the letters alleged geopolitical conspiracies: In 1890, it was England and Canada conspiring to take back territory from the United States, and in 1906, Japan was supposedly sending soldiers in disguise to prepare to seize Hawaii. Others focused on domestic political conspiracies, such as President Harry Truman covering up Communist infiltration of the government in the 1950s, and the idea that the 9/11 attacks were coordinated by the US to smear the Saudis.

Still others were just bizarre, such as a 1973 letter claiming that lesbianism is a CIA-inspired plot.

When Uscinski and Parent graphed the prevalence of such newspaper conspiracy-theory letters between 1890 and 2010, the result was a very jagged line that showed, if anything, a slight downward trend over time (the most prominent peak marks McCarthyism and the Red Scare of the early 1950s). More recent polling research by Uscinski suggests that this overall picture has remained the same – with belief in specific conspiracy theories rising and falling over time, but no evidence for an overall increase.

“The general hypothesis that’s put out there in the media is [that] everyone’s becoming conspiracists, and now is the golden age of conspiracy theory,” Uscinski says. “We find no such thing whatsoever.”

The percentage of letters to the editors of the New York Times containing talk of conspiracy theories has fluctuated over time. But it shows no overall trend across the period studied, from 1890 to 2010, according to research by political scientists Joseph Uscinski and Joseph Parent.

Uscinski’s research suggests that conspiracy thinking is more or less evenly distributed across the political spectrum, with Democrats becoming more vocal about conspiracy theories when Republicans are in power, and vice versa. Democrats tend to be suspicious of corporations and conservatives. Republicans are more likely to be suspicious of communists and liberals. In a chapter memorably titled “Conspiracy Theories Are for Losers,” Uscinski and Parent write that, conspiracies are a way for those who’ve lost or lack power to explain their losses, channel their anger, close ranks and regroup.

During his presidency, Donald Trump was the exception that proves the rule, Uscinski says. It’s not easy for one of the most powerful people in the world to claim they’re the victim of a conspiracy (it didn’t work, for instance, when allies of Bill Clinton blamed a “vast right-wing conspiracy” for the president’s troubles during his impeachment trial in the late 1990s).

Trump, however, cast himself as a political outsider from the beginning, Uscinski says: “He sets himself up, not only as a victim of the other side, but of both parties and the entire system and what he calls the deep state … so everything is rigged against him.” The Russia inquiry and his 2019 impeachment, Uscinski adds, helped to feed this narrative, which has continued through the chaotic aftermath of the 2020 election.

Rosenblum argues that Trump epitomises a new type of “conspiracy without theory” that relies on sheer assertion and repetition rather than evidence and reason. Rosenblum is co-editor of the Annual Review of Political Science.

Trump’s baseless tweets that the election was rigged, she says, stand in contrast to Kennedy assassination conspiracists obsessing over bullet trajectories or 9/11 conspiracists diving into data on the temperature at which jet fuel burns. “This conspiracy thinking that’s going on today takes a very different and novel and dangerous form,” she says, because it seeks to delegitimise political rivals, government agencies, the press and others who might stand in the way.

“It unsettles the ground on which we argue, negotiate and even disagree,” she and co-author Russell Muirhead wrote in their 2019 book, A Lot of People are Saying: The New Conspiracism and the Assault on Democracy. “It makes democracy unworkable – and ultimately, it makes democracy seem unworthy.”

In a widely cited 1964 essay in Harper’s Magazine, Columbia University historian Richard Hofstadter argued that a “paranoid style” runs through conservative political movements of the twentieth century, fed by distrust of “cosmopolitans and intellectuals.” Uscinski says his polling research finds no evidence that conservatives are more prone to believe in conspiracy theories than liberals, but other researchers still think there’s something to this idea.

Survey research by Joseph Uscinski and Joseph Parent finds that Republicans are more likely to suspect liberals and communists of conspiring, while Democrats are more suspicious of corporations and conservatives.