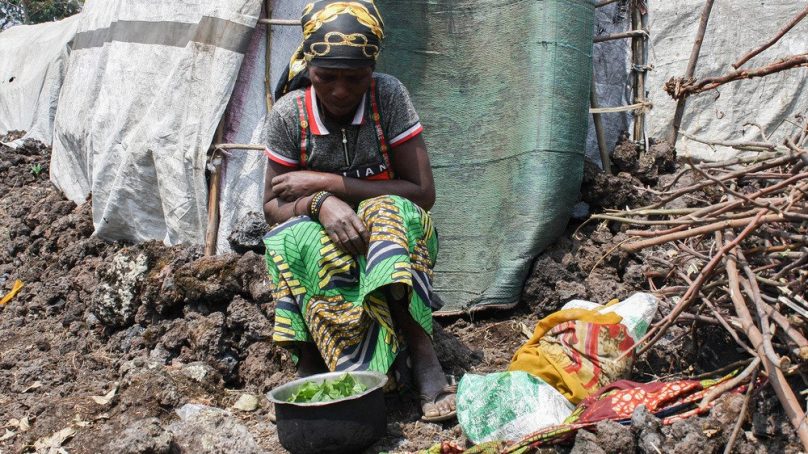 Editor’s note: This is the first of two stories on the aftermath of the May volcanic eruption in eastern Democratic Republic of Congo. The New Humanitarian spent three weeks interviewing displaced people, aid workers, and employees at a local observatory tasked with monitoring the volatile Mount Nyiragongo.

After one of Africa’s most dangerous volcanoes – Mount Nyiragongo – sent fast-moving lava towards Goma, the largest city in eastern Democratic Republic of Congo in May, international aid groups rushed supplies to half a million people who had been displaced.

But nearly four months on, an estimated 30,000 people remain in makeshift camps, with some pointing to what they see as long delays in receiving aid in a tightly controlled, government-led relief effort.

Lists of disaster victims put together by the government took weeks to finalise, aid workers from international agencies said. Local officials have also postponed moves into newly constructed shelters for the displaced while blocking some aid groups from providing assistance at the camps, the workers added.

“It is difficult to survive,” said Pascaziya Kahumba, who lives with five children in a tent made of scraps of cloth and plastic in Bujuri, one of roughly a dozen ad hoc displacement camps on the outskirts of Goma and in neighbouring Nyiragongo territory.

The Congolese government took charge of the response amid considerable media attention. On a trip to Goma in June, President Félix Tshisekedi told residents in need of aid: “We will never leave you”. Torn posters celebrating his arrival still hang on billboards around the city.

Some aid agencies have stepped back as the government made promises to distribute food and other relief supplies at the camps, staff said. Several senior aid officials with international organisations also told The New Humanitarian that they consider the emergency a low priority compared to other crises in eastern Congo.

Interviewed, 17 officials from local and international aid organisations working on the response. Six of those requested anonymity for fear of reprisals after publicly criticising the government.

At least 30 people died and thousands lost their homes after the Mount Nyiragongo eruption, which hit Goma’s northern fringes before stopping just short of its international airport. An eruption in 2002 covered a fifth of Goma in lava and left 250 people dead.

The city is home to 1.5 million people and is also a hub for international aid organisations that work across Congo’s eastern provinces, where conflict has displaced more than a million people so far this year and left large areas facing “crisis” levels of food insecurity.

Dozens of agencies responded in the aftermath of the eruption, which saw people flee Goma en masse. Since June, many aid groups have also been supporting those who returned to the city to live in makeshift sites where basic services have been set up.

Still, conditions in the camps are bleak, with limited water and hygiene services. Most residents have built tents with whatever materials they could find – leaves, tarpaulin, and bits of cloth.

Though local foundations and church groups have provided ad hoc food supplies for camp residents, international organisations distributed food to the sites only once in late August, an aid official and displaced people who were interviewed said.

Most of the aid officials blamed poor conditions and delays on the Congolese authorities, who have only recently finalised lists of people entitled to receive assistance and be transferred to better-built shelters – constructed at two sites by military personnel and aid groups.

When asked about the slow aid delivery, Raymond Efoya, a Congolese official helping coordinate the response for the ministry of humanitarian affairs as director of general services and human resources, blamed problems on the camp residents themselves. He said some were only posing as volcano victims to receive assistance, slowing down efforts to produce the lists and undermining plans to transfer people to the shelters.

Camp residents says they have nowhere to go while awaiting help. Fields of lava still blanket their neighbourhoods, where the smell of sulphur sticks to the air and heat rises from the ground. Building materials to construct homes elsewhere have not been provided by the government or aid groups, they say.

“There was nothing left,” said Vumilya Sinwatu, a resident of one of the camps in Goma, who described discovering her home and belongings destroyed after the eruption. “We just saw stones”.

Located on a tectonic divide known as the East African Rift, Mount Nyiragongo is considered one of the region’s most dangerous volcanoes due to its proximity to Goma and the speed of its lava.

The May 22 eruption triggered hundreds of earthquakes as well as warnings of further eruptions in the city centre and its adjacent lake, which contains vast amounts of trapped carbon dioxide that could suffocate residents if released.

Fearing the worst, on May 27, Congolese authorities ordered the partial evacuation of Goma, while aid groups pulled non-essential staff from the city. A second eruption never came, however, and the earthquakes eventually slowed.

When residents returned to Goma in early June – many using government-provided transport – the vast majority went back to their homes. But 40,000 remained displaced as of late August, of which more than 30,000 have been living in spontaneous camps, according to a UNHCR situation report that cites local authorities.

Nzuba Mbhoko and her six children were sleeping on the splintered floor of a school classroom in Kahembe when they spoke to The New Humanitarian in July. Some 160 other people shared the space, which had no front door and offered no privacy.

Sixteen-year-old Francine Bahati has been raising a child alone, without a tent to live in, after giving birth in August. Mother and son – who cries all night, Bahati said – both sleep on the cement floor of a gazebo with a leaky roof made of rotting wood and sheet-metal.