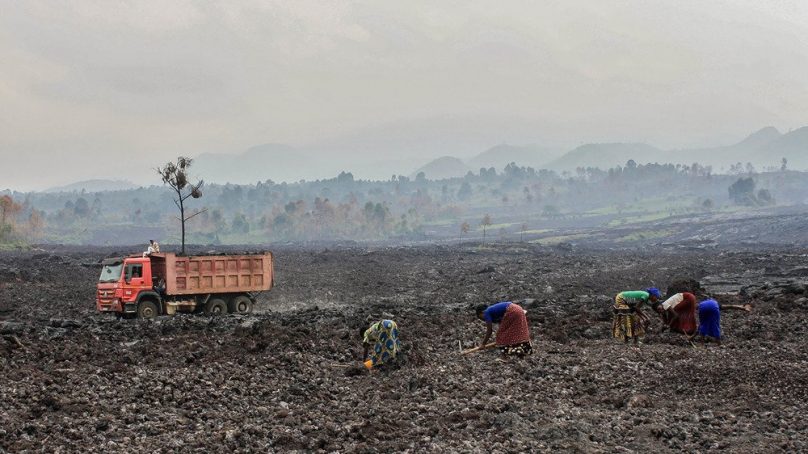 After DR Congo President Felix Tshisekedi’s visit to Goma, the government pledged to provide 1,000 temporary shelters, to be constructed by the military at a camp called Kanyarucinya. The International Federation of the Red Cross agreed to contribute 500 additional structures at another site, Kibati.

Some aid workers who were interviewed for this story questioned whether enough shelters have been built. The structures can house around 7,500 people – fewer than the number of people currently living in the camps, according to the UN High Commission for Refugees (UNHCR) situation report.

Though the shelters were finished several weeks ago – and lists of who will move into them are now finalised – the relocation process has not begun, aid officials and nearly a dozen camp residents have confirmed.

One senior aid official working on the response said the delay is caused by the government’s desire to officially inaugurate the camps, showing that it has responded to the crisis efficiently. The official described the hold up as “political”.

Another senior aid official from an international organisation working on the response said the government had requested that they pause distributions in the camps for weeks on end while efforts to finish the lists and relocate displaced people were being finalised.

In July, the senior official showed The New Humanitarian storerooms piled high with unused jerry cans, blankets, and cooking supplies intended for camp residents. “Nothing is done without permission from the government,” said the official, who confirmed this week that the storerooms remain full.

Spokespeople for two other international aid organisations – Oxfam and Tearfund – said they had readied aid for distribution when people move to the new shelters, although neither confirmed when that might be when asked in recent weeks.

although the government-led response is supported by several aid agencies – in particular the UN’s emergency aid coordination body, OCHA – other aid groups have played a lesser role than they might normally.

Jackie Keegan, who heads the Goma office UNHCR, said the agency and other humanitarian actors considered several short-term shelter options for displaced people but opted to pursue other interventions following “consultations with the government”.

The agency will soon start a cash-for-rent programme, and plans to support rebuilding efforts once land title matters are resolved, Keegan added.

Erwan Rumen, a coordinator in eastern Congo for the UN’s World Food Programme (WFP), said the food agency was willing to support the displacement sites but stepped back when the government said it had food available to deliver – food that displaced people interviewed by The New Humanitarian said they have not received.

“This [response] is small, highly political and highly sensitive,” Rumen said during an interview in his Goma office. “If people want our support they know where we are, and they can come to us. If they don’t need our support they won’t ask, and we are going to focus our resources where we can have an impact at scale.”

Funding is also proving a challenge for some NGOs. German aid group Welthungerhilfe, which was providing water in the camps, said it had run out of money in August, while Swiss NGO HEKS/EPER said its funds for water and sanitation services would end this month, though it hopes to get more.

When asked about the response, one senior UN official who spoke to The New Humanitarian described the crisis as “the least of their problems” given the scale of other disasters in the country.

Rumen of WFP said “3,000 additional families starving in Goma is nothing,” citing existing levels of food insecurity that affect roughly one in five people in the city. “There are massively bigger priorities that are less sensitive and less political on which I prefer to focus,” Rumen added.

Furuha Ndamira, a resident of one of the camps, said food shortages have forced her to eat weeds, while a lack of water means she must queue for hours at a communal tank. “There is no life at all [here],” Ndamira said.

Local organisations, church groups, and prominent public figures have stepped in to fill some of the gaps over the past months. They have provided occasional distributions of blankets, mattresses, and food bundles. But camp residents say it hasn’t been enough.

Many displaced people said they would like to rebuild their homes but are warned not to cross the lava. Several who have visited the sites of their former homes said they felt unwell afterwards, complaining of headaches and skin rashes.

The most they could do, they said, was hastily mark the outlines of where their homes once stood and break down volcanic rocks into gravel in the hope of earning a few dollars.

Frustration with the response is growing among camp residents, some of whom suffered after previous eruptions of Mount Nyiragongo, which looms over their tents and all of Goma.

Ninety-one-year-old Anna Nyirabikuba said she lost everything when the volcano erupted in 2002, before history repeated itself this year. In June, she moved to Kahembe camp, where she now sleeps under pieces of tarpaulin and cloth propped up by sticks.

Her name, she said last month, is not on the list of people chosen by the government to move into the new shelters.