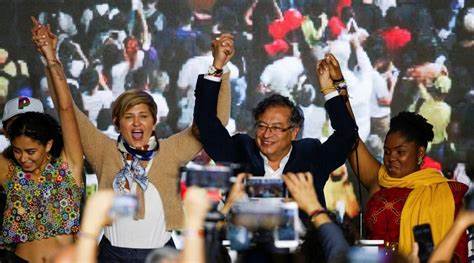 In early May, a show of force – announced by Gaitanista Self-Defence Forces of Colombia (AGC), after one of the group’s top leaders was extradited to the US – paralysed nearly a quarter of the country as the group forbade transport or economic activity for five days: a decree enforced at times at gunpoint. At least four civilians and three police officers were killed.

Chocó, on the northwestern coast, has suffered particularly high levels of conflict displacement. Colombia’s Ombudsman’s office estimates that up to 77 per cent of its municipalities are at risk of further displacement due to ongoing fighting between the National Liberation Army (ELN), which is the main left-wing guerrilla group and the AGC, which is also known as the Clan del Golfo.

“It is already questionable whether Petro will find a majority in the Colombian parliament for a fundamental change of the unequal living conditions, the high unemployment, inflation rate, national debt and the necessary socio-ecological transformation of the country. Although quite a few deputies of his left-progressive alliance Pacto Histórico support Petro after the congressional elections in March, he lacks a legislative majority of his own,” it explains.

It adds, “Moreover, the newly elected representatives must first prove that they can stick together and also lead a government together, especially now that the ministers are to be appointed. Tensions are already pre-programmed in the colourful spectrum of the Pacto Histórico. Reviving the peace process: In the last four years under Iván Duque’s ultra-right government, the peace process signed in 2016 with the former guerrilla group FARC was hardly implemented.”

According to the analysis, “President Petro needs to relaunch it, push for its implementation and ensure that social and local leaders are better protected from displacement, violence, and assassination. This year alone, more than 60 of these líderes sociales have been murdered.”

Residents in these regions often lack economic opportunities due to lack of presence of the state or basic infrastructure. Many are forced into illegal work, often under threat from criminal groups.

Humanitarian access to areas most in need of assistance has been especially restricted in recent months due to other curfews enforced by armed groups, as well as by the fighting between them.

Displacements from these conflicts have further increased demand on organisations like Save the Children, the Red Cross, and the Norwegian Refugee Council (NRC), which operate food and healthcare programmes along the major migration routes.

Power struggles between new armed groups in regions formerly controlled by FARC have further complicated the situation. “Disputed areas are more dangerous than when one armed group is clearly in control,” explained Eguiluz. “Unfortunately, some of the principal regions of conflict are also migration corridors.”

Roughly 50 per cent of Colombia’s workforce is informally employed, and two years of harsh Covid-19 lockdowns have left the country reeling economically. Unemployment sky-rocketed during the height of the pandemic. Rates have since returned to February 2020 levels, but many workers are still recovering from extended periods with little or no work.

As a result, poverty, at nearly 40 per cent, having fallen only slightly since 2020, remains stubbornly high. It has risen five percentage points from before the pandemic, according to the most recent quarterly government survey. The highest rates of poverty were reported in conflict regions.

With the rise in poverty, food insecurity has also increased. Malnutrition affected 54 percent of children under six years of age at the end of 2021, while the percentage of families able to eat three meals a day dropped from 90 per cent before the pandemic to 70.9 per cent.

The World Food Programme (WFP) reported recently that some 3.5 million Colombians were food insecure, with indigenous populations among the hardest hit. In the northeastern department of Guajira, home to the Indigenous Wayuu population, more than 16,000 children suffered from malnutrition and large regions of the department lack potable water.

“Hunger in places like Guajira and Chocó is only likely to increase,” said Sergio Guzmán, director of Colombia Risk Analysis, a research consultancy group. “In the short term,” he explained, “because rising fuel prices and inflation are increasing the real cost of basic goods for already vulnerable communities; and in the long term especially in places like Guajira that have long suffered nutrition insecurity due to global warming.”

The NRC says in a written statement that it estimates that 10 million people in the country – almost one in five – are in need of some type of immediate humanitarian aid.

As the main destination for Venezuelan migration and also the principal transit country, Colombia saw migration flows slowing in 2021 amid signs of anaemic recovery in Venezuela. Migrants travelling through Colombia from other countries nonetheless increased drastically, particularly those pursuing a dangerous route through Panama known as the Darién Gap.

Many of the migration corridors run directly through some of the most conflict-ridden parts of Colombia, which are concentrated near border areas.

Reports of xenophobia, particularly against Venezuelan migrants, increased dramatically in Colombia during the pandemic. Many Venezuelans who received a formalised status under a government initiative to grant them permanent residency still face considerable barriers to access health and education.

Petro has pledged to largely continue the migration policies of the current government, but the ongoing conflict as well as expected higher numbers of migrants heading to the United States this year is likely to test the aid response.