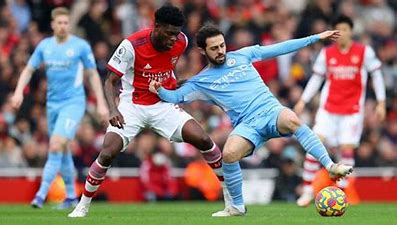 The Ghana international was making his last appearance for the Gunners before he takes part in the Africa Cup of Nations this month and underlined just how much Mikel Arteta will miss him over the coming weeks with a stellar display.

Partey broke up play, harassed and harried City’s plethora of superstars and dominated the midfield battle, although Arsenal would ultimately lose in somewhat contentious circumstances.

The Gunners went ahead through Bukayo Saka after being denied a potential penalty shout on Martin Odegaard and looked likeliest to score the second goal of the game, though the match flipped on its head in a crazy five-minute period at the start of the second half.

First Granit Xhaka was adjudged to have fouled Bernardo Silva inside the box, with Riyad Mahrez scoring the resulting spot-kick, and then Nathan Ake cleared off the line before Gabriel Martinelli shanked his follow-up wide via the woodwork with the goal gaping.

To make matters worse, centre-back Gabriel Magalhaes was then shown a second yellow card for a block on Gabriel Jesus and Rodri netted in stoppage time to secure a dramatic 2-1 win for the reigning champions.

Despite the defeat there were plenty of positives for Arsenal, not least the performance of Partey who was a dynamic and influential presence on and off the ball.

Gilberto Silva was hugely impressed by the 28-year-old’s display, writing on social media the day after: “He looked like Patrick Vieira” as well as adding, “He was very good. I really like him.”

The Brazilian also tweeted compatriot Gabriel, saying: “Lots of positives Gabriel. The team looks like it has lots of sprit, it’s great to see. Keep going!”

Arteta was unable to attend the match after testing positive for Covid, but first-team coach Albert Stuivenberg was happy with what he saw despite the loss, saying: “We are very proud because if you look at our process that we’re in with this young team, we want to see a team that can develop, be able to compete with a top team like Man City and in this case, I think we were the dominant team.

“We deserved the goal, I think we also deserved the penalty and to score at least one more than we did before half time, that’s the only thing. When you create those chance against a team like this, you have to take them.”