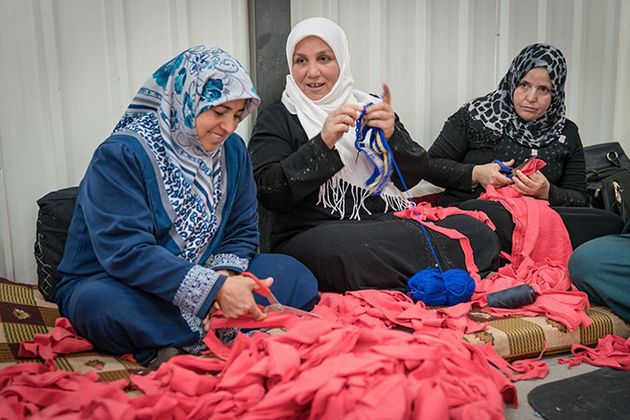 A 2020 study commissioned by the United Nations Population Fund (UNFPA) on the social acceptability and practicality of using reusable sanitary pads in Lebanon found a host of challenges. For starters, among the around one million Syrian refugees and the hundreds of thousands of Palestinian refugees are many women who either lack the resources to regularly wash fabric pads or feel uncomfortable about the practicalities involved.

Here’s how Chaza Akik, an assistant research professor in public health at the American University of Beirut (AUB) who has studied period poverty, summarised the issues that emerged: “While some women, mainly adolescents, felt disgusted by manually washing the pads, other women raised concerns about having access to water and soap and finding private places to dry the pads especially in informal settlements [where many of the country’s Syrian refugees live].”

A truck bearing the logo of the period poverty awareness-raising festival Jeyetna, which distributed free period panties, reusable pads and menstrual cups across Lebanon this summer.

This is also a hurdle for those trying to encourage the use of menstrual cups in Lebanon – people like Elissa and Charbel, who founded an online shop called Juniper at the onset of the financial crisis in September 2019.

Menstrual cups are made of a flexible material and inserted into the vagina, where they collect blood and then are removed, emptied, and washed out for reuse. Much like tampons, the need to put them inside the vagina has made cups largely unwelcome in Lebanese society, according to Elissa and Charbel, who prefer to go by their first names.

They said this is due to a multitude of reasons and misconceptions, including an emphasis on keeping the hymen intact before marriage, despite the fact many women’s hymens are stretched without sexual activity.

Using the product as an opportunity, and their presence on online platforms like Instagram as springboards, Juniper’s founders hope to spread scientific knowledge, raise awareness and encourage open discussions about women’s bodies that can help eliminate stigma.

“We took it upon ourselves to target this stigma and change how the female body and periods are perceived and discussed publicly,” they told The New Humanitarian in a joint email. “We want to reinforce a safer environment within our society, in which men and women are equally informed and women’s issues are no longer marginalised.”

Since its launch, Juniper has sold menstrual cups to over 2,000 users. But with a price tag of around 132,000 Lebanese pounds each, around $22, they are unaffordable for most women in Lebanon. Comments on Juniper’s Instagram page show a variety of opinions on the cups they sell: While one follower criticised the hefty cost, another described it as the “best investment” she had ever made.

Aware of the high costs of reusable products and the lack of public discussion on the issue, Jeyetna, a two-month period poverty festival that took off in July, is trying to bring menstrual alternatives to the doorsteps of women and girls across Lebanon.

Founded by British-French film director Evelina Llewellyn, who is based in Beirut, Jeyetna’s white truck is painted with images of blood-stained underwear hanging off laundry lines, and roams Lebanon from south to north.

Billing itself as the first of its kind in the region, the donations-based festival stopped in 25 locations across Lebanon, hosting a period market that distributes free reusable, eco-friendly menstrual products – mainly period panties (which soak up blood and can then be washed), reusable pads and Juniper’s menstrual cups.

Working with Jeyetik, another Lebanese campaign that has been distributing menstrual products to those in need since the Beirut explosion, the organisers say the diversity of items they give away allows women to experiment with new alternatives and choose the option they are most comfortable with.

Local volunteers help tailor the festival to address the different needs and cultures it encounters during its nationwide tour, offering medical consultations and a safe space for women to discuss their periods. A documentary on period poverty, directed by Llewellyn, is screened at each stop.

Myriam Skaf, the founder of Jeyetik, said there have been generational differences in what women ask for, but almost everyone has been open to trying something new.

“While the younger generation is prone to use menstrual cups, women in their 30s and 40s are preferring reusable panties,” Skaf said. “Some have asked for ways to sew these panties themselves locally, to distribute them among women in their areas.”

Skaf launched Jeyetik after the Beirut blast, when it became clear that some girls were avoiding school because they didn’t have the pads or other menstrual hygiene items they needed. Relying on donations, Jeyetik has since distributed over 6,000 period products for free. But given the vast needs in Lebanon, and limited funding at home and abroad, donations are now dwindling.

“2021 is a very challenging year economically in Lebanon and around the globe,” said Skaf. “People who were very generous in their donations after the Beirut blast and excited about these initiatives are no longer in a position that allows them to support us financially.”