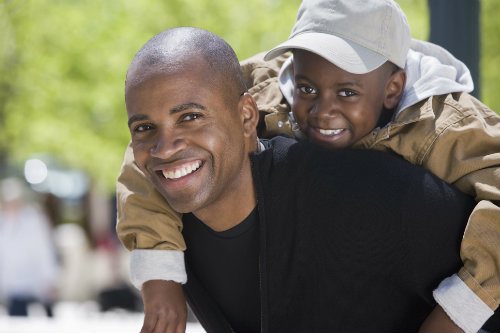 Anthropologists used to assume that fatherly behaviour could evolve only in monogamous animals, Stacy Rosenbaum, co-author of Annual Review of Anthropology, says. Species like the mountain gorillas undermine that assumption.

They also show that, despite what scientists have long thought, male animals don’t have to choose between spending their energy on mating or parenting. It seems taking care of kids can be a way of getting mates.

Studies of human dads and stepdads have hinted at the same idea. “A lot of guys will willingly enter into relationships with kids they know aren’t theirs,” says Kermyt Anderson, a biological anthropologist at the University of Oklahoma. That investment might seem paradoxical from an evolutionary perspective. But Anderson’s research suggests that men invest in stepkids and even biological kids partly as an investment in their relationship with the mother. When that relationship ends, fathers tend to become less involved.

A human dad who cares for his children or stepchildren is different, of course, from an ape or monkey who just lets kids hang around. But an anthropologist at the University of Notre Dame Lee Gettler and Rosenbaum wonder whether our own ancestors had similar habits to a mountain gorilla or macaque. Under the evolutionary pressures they faced, these friendly tendencies toward kids could have ratcheted up into devoted fatherhood.

It’s clear human fathers are unusual in their attention to their children. “However, it’s also clear that fatherhood in humans is quite variable,” Sear says. Not all dads are doting, or even present.

But that doesn’t necessarily affect basic survival. In a 2008 paper, Sear and co-author Ruth Mace asked whether children with absent fathers are likelier to die. They reviewed data on child survival from 43 studies of populations around the world, mostly those without access to modern medical care.

They found that in a third of the studies looking at fathers, kids were more likely to survive childhood when their dad was around. But in the other two-thirds, fatherless kids did just as well. By contrast, every study of children without mothers found they were less likely to survive.

“That is not what you would expect to see if fathers are really vital for children to thrive,” Sear says. Rather, she suspects that what’s vital are the jobs fathers perform. When a father is missing, others in the family or community can fill in. “It may be that the fathering role is important, but it’s substitutable by other social group members,” she says.

What is that role? Historically, Gettler says, anthropologists have viewed fatherhood as all about “provisioning” – bringing home the bacon, literally. In some foraging communities, more successful hunters also father more kids. But Gettler hopes to help expand the definition of a dad.

Research has shown that fathers can have important roles in directly caring for their children, for example, and teaching children language and social skills. Fathers may also help their children by cultivating relationships in their communities, Gettler says. When it comes to survival, “Networking can be everything.”

A dad’s job also varies culturally. For example, in the Republic of the Congo, Gettler works with two neighbouring communities. The Bondongo are fishers and farmers; they value fathers who take risks to gain food for their own families. Their neighbours, the Bayaka, are foragers who value fathers who share their resources outside their families.

“In the West we have this idealisation of the nuclear family,” says Sear: a self-reliant, heterosexual couple in which Dad does all the provisioning and Mom all the childcare. But worldwide, she says, families like this are very rare. A child’s biological parents may not live together exclusively, for life or at all, Sear writes in a recent paper.

Childcare and food can come from either parent – or neither. Among the Himba of Namibia, for instance, children are often fostered by extended family.

“Possibly the key defining feature of our species is our behavioural flexibility,” Sear says. Assuming that certain roles are “natural” for fathers or mothers can make parents feel isolated and stressed, Sear writes. She hopes research can broaden our understanding of what fathers are for, and what a human family is. That might help societies to better support families of all kinds – whether they have dads like Gettler who are busy chasing the children around, or dads who are away fishing or no dads at all.

“I think we need to take a much more non-judgmental view of the human family, and the kinds of family structures in which children can thrive,” Sear says, “to improve the health of mothers, fathers and children.”