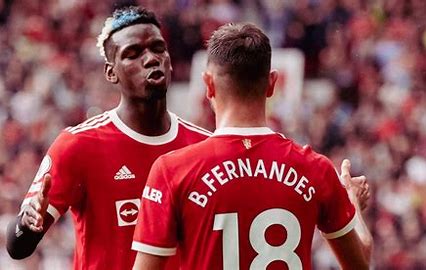 A capacity crowd were treated to a first glimpse of the club’s latest signing, Raphael Varane, prior to kick-off and the former Real Madrid star watched on as his France international teammate put on a midfield masterclass.

Spurred on by over 70,000 supporters for the first time in 18 months, United made an electric start but had to wait until the half hour mark to open the scoring when Pogba fed Bruno Fernandes and the Portugal international just about squeezed his shot under the advancing Illan Meslier.

Luke Ayling levelled matters shortly after the break with a rasping drive from 25 yards, but Pogba swung the momentum back in the home side’s favour with a stunning pass just four minutes later, playing in Mason Greenwood who tore past the Leeds goal-scorer and beat Meslier via the inside of the post.

A third goal of a pulsating contest inside six minutes arrived 120 seconds later when, in fairness, Pogba’s pass played Fernandes a little wide, but the midfielder was able to turn back inside and add to his tally, despite Ayling’s best attempts on the line.

Fernandes hadn’t scored from open play in any of his 14 previous Premier League games, but roared back into form on Saturday, completing a stunning hat-trick by latching onto Victor Lindelof’s raking pass and firing a rising volley beyond the hapless Leeds goalkeeper.

And there was still time for Pogba to enter the record books when he raced down the left flank and crossed low for Fred, who applied a ruthless finishing touch with a crisp low drive.

Pogba’s display, meanwhile, represented an emphatic response to those that doubted his commitment to the cause might be some way less than total given he has entered the final year of his contract and continues to be linked with a move to PSG.

Speaking about Pogba’s future at his pre-match press conference, Ole Gunnar Solskjaer said: ‘It’s been spoken and written about so often but every discussion I have had with Paul is a positive one.