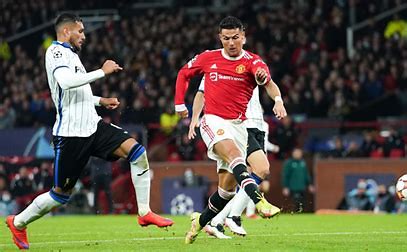 Cristiano Ronaldo turned on his Manchester United teammates during a furious half-time rant against Atalanta in midweek. Ole Gunnar Stolkjaerres side were staring down the barrel of an ignominious group stage exit at the break, with the unfashionable Serie A side leading 2-0 and carving their opponents open, almost at will.

Frustrated at what he deemed an “unacceptable” performance, Ronaldo, according to The Sun, launched into an astonishing tirade and told his colleagues they ought to be “ashamed”. And a United source told SunSport: “Cristiano addressed the whole team and told them that the performance was unacceptable.

The comments angered a number of senior players.

“He asked if they were not ashamed and said this was not how Manchester United perform in front of their own fans. He told them they needed to win the game and, if they didn’t, they might not qualify for the next stage of the Champions League.”

Ronaldo’s barbs clearly had an impact as United embarked on a spirited second half comeback which eventually culminated in the 36-year-old heading home an 81st minute winner which breathed new life into his side’s European campaign.

Despite his phenomenal goalscoring record since his return in the summer, Ronaldo hasn’t been immune to criticism himself and has faced the accusation that he doesn’t work hard enough for the team.

Responding to those claims ahead of Sunday’s heavyweight clash against Liverpool, he told Sky Sports: “I know when the team needs my help defensively. But my role in the club is to win, help the team to win and to score goals – [the defensive side] is part of my job.

“The people who don’t want to see that is because they don’t like me but to be honest, I’m 36, I win everything so am I going to be worried about the people who say bad things about me?

“I sleep good at night. I go to my bed with my conscience very good. Keep going with that because I will still close mouths and win things.”