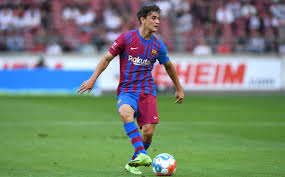 Ralf Rangnick wants Manchester United to pay the release clause of Barcelona prospect Gavi. That’s according to Todofichajés, who claim the midfielder was one of the transfer options Rangnick presented to the club when first getting involved.

The German is currently serving as United’s interim manager to the end of the season. Then, he will become a consultant, thus having a large say in their activity.

There are many issues he will be involved in addressing. One area that is a pressing concern for United is their midfield, where they risk losing Paul Pogba at the end of his contract next year. They will need to find a replacement if he does leave, and it is claimed that Gavi is near the top of the list.

The teenager has quickly established himself in the Barca first team this season. He has made 11 starts in La Liga and a further three substitute appearances, providing two assists.

Still only 17, he has a big future ahead of him. It remains to be seen where he will be spending it, as he has already attracted transfer interest from the likes of Chelsea and Liverpool.

Barca only have him under contract until 2023 and are trying to extend his deal, which also contains a €50 million release clause. The Spanish report claims Manchester United would be capable of meeting this asking price and Rangnick intends for them to do so.

He supposedly has instructed United chiefs that Gavi could “cement the future of the club”. Even though a deal would be “complicated”, the report claims it is not impossible. Barca’s financial situation means they are struggling to appease Gavi’s agent at present. The option for them to cash in may be too good to turn down, even if they would later come to regret it.

United are hoping they can take advantage and offer him a contract that would be “unattainable” for his current club. But they will have to wait until the summer to find out what the decision will be.