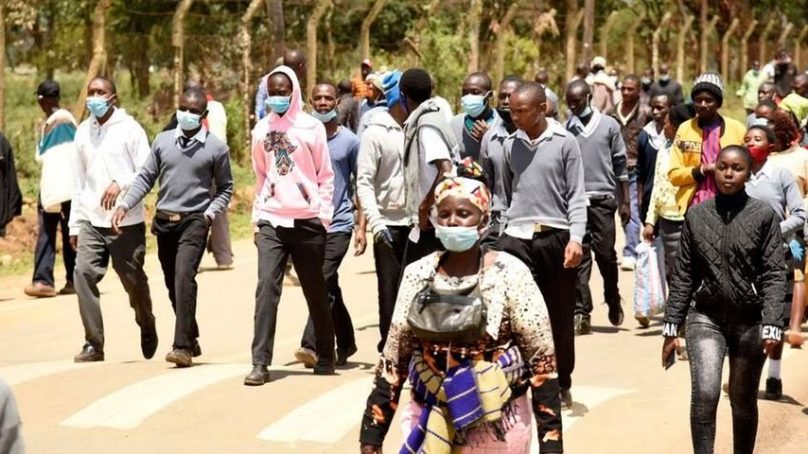 Eight people, among them three policemen, were killed and hundreds of villagers uprooted from their homes in Laikipia County in Kenya’s Rift Valley region following weeks of bloody inter-community clashes.

The police and administrators link to brewing political tensions as the country prepares for elections next year.

The political angle to the clashes that have all along looked like a competition for natural resources on was introduced on Wednesday by pastoralists leadership, which claims their communities may be being nudged forcibly to align themselves to emerging political formations ahead of the August 9, 2022 general election.

This is after several homes were torched and dozens of livestock stolen by raiders believed to be from the Pokot or Turkana communities. Consequently, President Uhuru Kenyatta ordered a dusk to dawn curfew in the affected areas to help security personnel repulse the emboldened raiders described as capable of standing their own even against the military.

It is not known who is arming the cattle herders, but northern Kenya borders Ethiopia and South Sudan, which are known sources of small arms and weapons. Also, the region has for decades been training ground for United States and British militaries.

The inter-community conflict highlights the challenge the East Africa country faces just 11 months to the elections that promise to be demographically and economically to be disruptive, unless the government takes the early warnings seriously and deploys enough security in traditional flashpoints.

Already schools and businesses in the conflict regions have been closed and entire families forced to take refuge at shopping and places they can get security. The loss of livestock of the herders who occupy the entire breadth and length of northern Kenya, has not been evaluated, but its immediate impact on education, shelter, health and other basic needs supplies cannot be gainsaid.

Political leaders from pastoralist communities argue current insecurity extends beyond the competition for natural resources, suggesting the conflict is the beginning of a bloody build up to a bruising political contest ahead. As a result, legislators from arid and semi-arid regions are now piling pressure on the government to beef up security in the regions that have also in the past fallen prey to cattle rustlers from Ethiopia and South Sudan.

In Kenya’s elections history political power is consistent with allocation of resources, which explains the cycle of violence the country experiences at every election for the past 55 years.

“The conflicts have gone on for far too long. There is need to put the matter to rest by zeroing in on the real cause of the conflict. It is not just about natural resources. There are external forces behind the inter-communal conflict, which must be investigated and dealt with firmly,” says Kanchori.

Already, two senior politicians from the mainly pastoralist communities – the Samburu and the Pokot – were on Wednesday arrested for allegedly arming their communities and inciting them to raid their neighbours for livestock. Former Laikipia North MP Mathew Lempurkel, a Samburu, was arrested in Rongai area on the outskirts of Nairobi on Wednesday morning and sitting Tiaty MP William Kamket was arrested in the afternoon in Nakuru, 170 kilometres west of Nairobi.

Both were arraigned in court on Thursday and police says they are the police are investigating them for murder, robbery with violence, stock theft, malicious damage to property and incitement to violence.

With a forest cover of less than 10 per cent, parts of Kenya and the wider East Africa have been going through the vicissitudes of climate change, which Kanchori predicts is likely to worsen with continued wanton consumption of the remaining natural resources – forest cover and water.

In his opinion, political leadership is key to conservation of the environment and in turn ensure equitable access to resources and reduced ethnic conflicts in the area.

Regional Commissioner George Natembeya described the invaders as hardy and have mastered the ragged terrain, have superior weapons compared to Kenya security forces who make do with the G3 and AK47 that have a shorter shooting range. The cattle rustlers, as the invaders are profiled, are equipped with M16 rifles that have a 3.5-kilometre shooting range, according to Mr Natembeya.

The rifles make G3 and AK47 look like toys in the eyes of the invaders, he says.

“They have killed our (police) officers. These guys shoot with intent to kill. When officers come here, they know they are coming to deal with criminals, not ordinary law-abiding civilians. We have drawn the lines and we are no longer going stand by and see innocent people being killed. If we do not act decisively, the mayhem will spread to other counties. If we do not do that, Kenya will become banana republic,” says Natembeya

President Kenyatta has declared the drought a national disaster. Consequently, the government, through Cabinet Secretary National Treasury and Planning (Finance) Ukur Kanacho Yatani announced on Thursday that his ministry would disburse Ksh2 billion ($18.2 million) to mitigate a mutating situation that has the hallmarks of a dire humanitarian crisis.

In the recent past, there have been clashes between Samburu, Pokot and Turkana cattle rustlers with the migrant Kikuyu being the collateral damage in intermittent violent and bloody competition for water and pasture resources.

The arid and semi-arid regions of Kenya, which roughly make up about two-thirds of Kenya’s landmass, are experiencing prolonged spells of drought, which, whenever that happens compels the traditionally nomadic communities to invade private ranches and farms in search of pastures and water for their livestock. Arid regions produce more than 80 per cent of the country’s livestock.

As the government took measures to ameliorate the humanitarian crisis in Laikipia and adjoining counties, there was more bad news. The metrological department forecasts that the food growing regions in the west and central regions are expected to get reduced rains in the short-rains season, that falls between October and February. That implies a longer recovery period for regions that are already water and pasture-stressed.