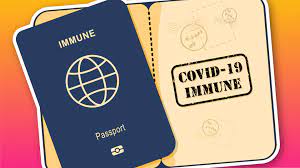 Sometime soon, you might arrive at an airport or a stadium or a restaurant, open an app or flash a card, and be admitted to a place or experience that was denied you during the pandemic. You will have just deployed a vaccine passport, a certification of either vaccination status or immunity following a natural infection that confirms you no longer pose a risk to others.

“Soon” is right now in Israel, where a passport debuted in February that lets vaccinated people attend events and patronise restaurants and gyms in the country, and in Estonia and Iceland, where proof of vaccination allows non-citizens to enter without quarantine.

Soon is probably the near future for other rich countries that vaccinated their citizens early – including in the United States, where the Biden administration has committed to the concept of vaccine passports and is pushing the Department of Health and Human Services to set standards for competing private-sector products.

But soon is nowhere in reach for the low- and middle-income countries that have received only a small number of vaccines or haven’t been able to begin their vaccination campaigns. Which means the arrival of vaccine passports could let affluent societies reach the far side of the pandemic while poor ones are still waiting to be protected from it, reinforcing the economic divides that the pandemic made so evident.

There are so many proposals for what might make up vaccine passports – where the data is held, how frameworks are built to protect it, what the app that delivers it looks like – that it’s a little early to talk about their final form. But experts say there will be no escaping their development and that it is not too soon to discuss whether they will endanger privacy, exacerbate inequity and create a two-tiered world.

“There is an inevitability to this,” says Alexandra Phelan, an international law scholar and faculty member of the Center for Global Health Science and Security at Georgetown University School of Medicine. “Fundamentally, governments are wanting to implement these mechanisms, because they are not only about protecting public health but about restarting the economy and removing barriers to travel.”

Vaccine passports are tricky to talk about, because they are not yet well-defined. “Passport” implies a document endorsed by a state that establishes citizenship and guarantees diplomatic protection. What is being discussed is more like the World Health Organization’s “yellow card.” That document’s actual name is the International Certificate of Vaccination or Prophylaxis, a form that was created in the 1930s to indicate that travellers have received certain vaccines but that isn’t certified by individual governments.

The yellow card primarily attests to yellow fever vaccination, because anyone infected with that disease could unknowingly carry it to a virus-free country and seed it among mosquitoes there. (The card doesn’t get its name from the disease but rather from the colour of its sturdy cardstock, which can withstand being folded up inside a passport and handled a lot.)

It is not currently used to certify Covid-19 vaccination, though some experts have recommended that adding it would be a simple fix.

“‘Passport’ is kind of a misnomer. ‘Digital certification of vaccination status,’ or something like that, is probably more applicable,” says Josh Michaud, associate director for global health policy at the Henry J. Kaiser Family Foundation, which is preparing a briefing document on them. “But passports is the name that we’re probably stuck with, unfortunately.”

Meanwhile, the conflation of evidence of immunity with proof of citizenship – and the next-step conclusion that national identity implies a national mandate to be vaccinated – is making vaccine passports the latest missile in the culture wars.

They were derided on several Fox News programs earlier this week, and on Tuesday, Florida governor Ron DeSantis threatened to ban them from being used in his state.

Thus far, only a few certifications offered in the US could be construed as a passport. In March, the state of New York began using Excelsior Pass, an app developed by IBM that draws on the state’s vaccine registry to verify vaccination status for people who want to attend events or go to venues for which the state has set capacity limitations.

Nationally, people who receive their vaccines at Walmart and Sam’s Club pharmacies can have them certified via standards developed by the Vaccination Credential Initiative, a coalition of non-profits and companies including Microsoft, Salesforce, and the Mayo Clinic.

Walmart draws on the chains’ pharmacy records and can report results to several existing health record apps. Both the Walmart effort and the New York app deliver confirmations via QR codes that can be kept on a phone or printed out.

More such programmes are coming. European Union officials have announced plans to develop a “digital green certificate” by this summer in hopes of rescuing the tourism season, and the African Union and Africa CDC are developing a My Covid Pass to allow safe border crossing across the continent. The World Health Organization has convened a “smart vaccination certificate” working group to develop international standards.

The Ada Lovelace Institute in the United Kingdom maintains a list of countries that have launched passports or expressed plans to create them. Sponsors and developers who have expressed interest include the World Economic Forum, the International Chamber of Commerce, the International Air Transport Association, the Linux Foundation, MIT, Brown University, MasterCard, the Canadian national health care system, the PathCheck Foundation (which developed open-source contact-tracing apps) and an array of smaller companies.

The aim of all these efforts is to reopen free movement globally, but one example, the Chinese government’s proposed passport, demonstrates they can have layered goals. The government has announced it will only admit travellers who can prove they received Chinese-made vaccines. But since those formulas have not been approved by the US or EU the passport represents a de facto bar to travellers from those areas – or a subtle boost to the desirability of the Chinese vaccines, which China has been offering to governments around the world.