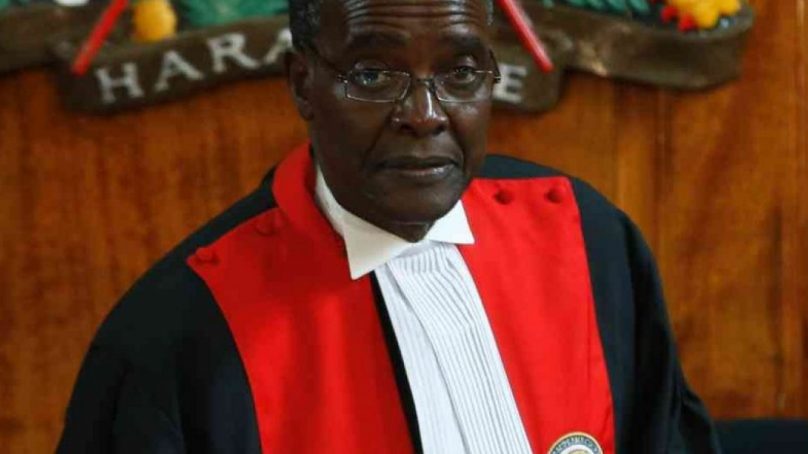 Kenya’s Chief Justice David Maraga has kicked up a political storm after he asked President Uhuru Kenyatta to dissolve the country’s parliament for failing to enact laws to end discrimination of women in appointive and elective positions.

Justice Maraga, who seen as a paragon of the rule of law since he replaced Dr Willy Mutunga in October 2016, made the decision based on six petitions, among them the influential the Law Society of Kenya. His bold defence of the rule of law and justice has often placed on a collision with the executive, which together with the legislature have on several occasions attempted to emasculate the judiciary and subvert the justice.

“I have before me six petitions seeking that I advise you to dissolve Parliament under Article 261(7) as read with Articles 27(3 and 8), 81(b) and 100 of the Constitution. Besides the Law Society of Kenya, the other petitions were filed by ordinary citizens, namely Margaret Toili, Fredrick Gichanga Mbugua’h, Stephen Owoko, John Wangai, Aoko Bernard and former member of Parliament David Sudi.

The petition caught the government and the public flatfooted and now attention is trained on the president, who faces rebellion in his own ruling Jubilee party after falling out with his deputy over the 2022 presidential candidature.

Whether the president acts on the CJ’s advise or not, the East African nation is staring at a constitutional crisis with far-reaching political, economic and legal ramifications. In the event the president accedes to the advice, his decision will have budgetary implications as the Independent Electoral and Boundaries Commission must be allocated resources, manpower and equipment to hold an election that could cost the upwards of $500 million.

Like many countries around the world, Kenya is reeling from the economic and social impact enforced by the coronavirus pandemic that caused an economic slowdown it is estimated to have caused the country more than a quarter of its Ksh3.9 trillion 2020-2021 budget.

In the event the president ignores the advice – as he is wont to do – it will set a precedent future president will invoke to subvert the law and the constitution.

Says the CJ, “The petitions are based on the ground that despite four court orders compelling Parliament to enact the legislation required to implement the two-thirds gender rule in accordance with Article 27(3) as read together with Articles 81(8) and 100 of the Constitution, Parliament has blatantly refused and /or neglected to do so.”

The “two-thirds rule” is an acronym for the constitutional imperative that prohibits any form of discrimination in the appointive and elective positions on the basis of one’s gender.  The rule has its roots in Article 27(3) of Kenya’s Constitution, which provides that “women and men have the right to equal treatment, including the right to equal opportunities in political, economic, cultural and social spheres.”

The CJ’s indictment of the legislature comes against the backdrop of a joint push by the government and the opposition to amend the constitution create more executive positions in the guise of inclusivity, national reconciliation and healing following elections in the wake of the 2007, 2013 and 2017 disputed presidential polls.

The CJ’s “advice” to the president immediately put the executive and the legislature on the edge, with opinion leaders in favour of and opposed to Maraga’s petition keen know how the president who has had a several run-ins with the president of the Supreme Court, will react.

In anticipation of the decision by the CJ, political commentator and an ally of President Kenyatta, Dr Mutahi Ngunyi, had long “predicted” that Maraga, who is also the president of the Supreme Court was plotting a constitutional coup de tat to eject the president from power.

Dr Ngunyi comes up with the four permutations he says can be used to wrest the reins of power from Kenyatta. One of them was failure by parliament to pass the law to create from for the implementation of the two-thirds gender principle as envisaged by the 2010 Constitution.

As Kenya marked the 10 anniversary of the 2010 constitution that has been hailed as progressive, sections of it have not been fully implemented. The two-thirds rule has been a source of controversy in public service appointments, with the cabinet failing short of the falling short of the spirit and the letter of the mother law.

Within hours of chief justice’s petition to the president becoming public, opinion was divided about the need dissolve parliament with Speaker of the National Assembly Justin Muturi terming it a waste of time and an unnecessary strain on public resources.

“The obligation to take measures to ensure two-thirds principle in all elective and appointive positions as provided for under Article 27 of the Constitution is on the state as a body rather than parliament as a single institution. This interpretation is further confirmed by the fact that the two-thirds gender rule with respect to Members of Parliament is not one of the pieces of legislation envisaged under Article 261(1) in the Fifth Schedule of the Constitution,” says Mr Muturi.

However, Leader of Minority in the Senate James Orengo says the petition by the chief justice is food for thought for all levels of government – the executive, legislature and judiciary.

“CJ Maraga’s advice to the president to dissolve Parliament is momentous. Probably significant and historic from a constitutional standpoint. How we apply foundational principle and values and constitutionalism is now the biggest test,” according to Senator Orengo.

Since his appointment, Justice Maraga has often clashed with the president on matters to do with the rule of law and justice. In 2017, he president over the hearing of an election petition by the opposition challenging the election the president and his deputy. In a landmark ruling, the Supreme Court annulled the August 2017 presidential, which it described as fraught with illegalities that undermined the principles of free and fair election, considered the pillars of democracy.

The annulment placed the chief justice on a coalition course resulting in the budget of the judiciary being substantially reduced after Mr Kenyatta declared winner of the repeat election. The president has gone further and deferred the appointment of 41 judges after vetting by the Justice Service Commission, which Maraga heads. The president publicly vowed to punish Supreme Court judges for annulling his election in his now famous “we shall revisit” remark – a thinly veiled threat to undermined the independence of the judiciary.

Maraga contends in his petition to the president, “To actualise, amongst other obligations, the two-thirds gender principle, Article (1) read together with the Fifth Schedule to the Constitution required ‘Parliament (to) enact any legislation required by this Constitution to be enacted to government a particular matter within five years’ of the promulgation of the Constitution on the 27 August 2010.”

The opposition is contradicted by Bungoma County Senator Moses Wetangula. Senator Wetangula, a lawyer by profession, observes, ‘On the basis of the legal doctrine and logic of the balance of convenience’ Mr Maraga is dead wrong. He has acted per incuriam and nobody or authority will act on the same. The resolution, restatement and construct of the gender rule is not just Parliament.”

In his petition, CJ Maraga lays the blame on the legislature for failing to pass the requisite laws to addresses gender discrimination even after being ordered by the court.

“Upon failure to enact that legislation, even after extending the period by one year as authorised by Article 261(2) and (3), a petition was filed in the High Court – Constitutional Petition No.182 of 2015 – Centre for Rights Education and Awareness (Creaw) versus Attorney General and another (2015) eKLR – in which the High Court issues an order of mandamus directing the Attorney General and the Commission on Implementation of the Constitution to ‘prepare the relevant Bills for tabling before Parliament for purposes of implementation of Articles 27(8) and 81(b) of the Constitution as read with Article 100 and the Supreme Court Advisory Opinion dated December 11, 2012 in referenced number 2 of 2012’ within forty (40) days from 26 June 2015.”

Justice Maraga’s advice to the president underlines widely held view that the country’s 12 parliament is an assembly crooks that are not ready to uphold constitutionalism and the rule of law.