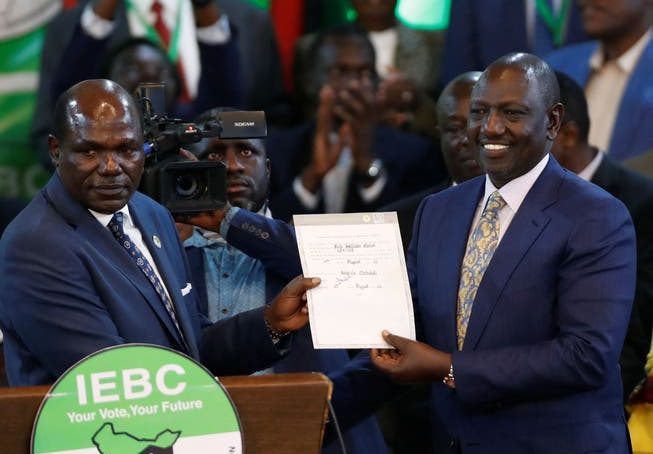 However, the declaration of the results took more than four hours to make after veteran politician Raila Odinga boycotted the event.

As the chairman of the IEBC Wafula Chebukati made the announcement four commissioners, including the deputy chair Juliana Cherera.

The four commissioners told a press conference in the capital Nairobi that they had “distanced” themselves from the IEBC results, alleging opaqueness in the collation of the final result. The four officials walked out minutes before the electoral body was supposed to announce formal election results this afternoon.

It was later alleged by an aide of one of the winning Kenya Kwanza Alliance principals Moses Wetang’ula that the four election officials that had been in a meeting with President Kenyatta before they disowned the results.

The president and his deputy have been at loggerheads for the better of the past five years and during presidential campaigns for the August 9 elections, they vouched for the opposing sides.

In dramatic scenes at in Nairobi, fighting broke out at the Bomas of Kenya, the venue where the result was expected to be announced. Security personnel dragged out multiple people.

Historically, candidates fight on even after formal results have been announced, with riots, court proceedings and fraud allegations usually flying high. Both Odinga and Ruto polled for days at 50 per cent of the vote most of last week but no formal results were announced this afternoon as a result of the chaos.

By law, results had to be announced within one week after the election, so before midnight tomorrow. To win outright, a candidate needed more than half of all votes and at least 25 per cent of the votes in more than half of Kenya’s 47 counties.