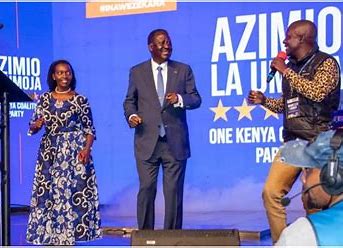 Kenya elections: Azimio manifesto is rich on rhetoric, bereft of substance and is a continuation of failed presidency

Kenya’s former Prime Minister Raila Odinga – a leading candidate in the 2022 presidential election – unveiled his manifesto he says has the ingredients to revamp an economy battered by a decade of brazen theft by members of the outgoing government. Outgoing President Uhuru Kenyatta’s government is synonymous with public resources theft, mismanagement and abuse. Raila, who is leading a coalition of 26 political parties under the Azimio la Umoja One Kenya Alliance, says he is ready and willing to undo the damage wrought by the incumbent, who has openly financed his campaign.

I have read the 84-page Azimio Manifesto and it is quite underwhelming. It finally confirms my worst fears that the Azimio team is completely clueless on how to address the challenges we are facing.

I know those who are politically possessed will think this opening remark is biased and harsh. It is not. In fact, I am quite generous in my assessment.

The document is full of qualitative narratives and it doesn’t quantify or provide any timelines for the promises made. This means that it will be impossible to hold Azimio government to account if they take power.

The few issues quantified are quite concerning because they haven’t been financed. There is no explanation of where the money to fulfil these promises will come from. I will give the following examples:

1. Azimio promises to increase county government allocation to 35 per cent of shareable revenue. This translates to Ksh749 billion as per the Division of Revenue Bill 2022, which puts the shareable revenue at Ksh2.1 trillion. The Bill has currently allocated Ksh370 billion to the counties. Where will the additional Ksh379 billion come from?

2. The Inua Jamii project will transfer Ksh6,000 monthly to two million poor households. This translates to Ksh144 billion annually. Karua told a local media station that the Azimio government will fund this from the Ksh800 billion it claims will be saved from fighting corruption. This is pure fantasy and delusion

3. Azimio promises free education from ECD all the way to the university. The education budget is currently at Ksh463 billion. How much will it cost to offer free education to all?

5. Azimio promises to connect all houses to water. No numbers are given on how many households will need to be connected, at what cost and within what timelines. They just say it will be done progressively. One would assume they will do it in five years since that is the duration their term will run. How possible is this?

7. They also promise to raise the share of manufacturing to 30 per cent of GDP. Raising the contribution from 7.5 per cent to 30 per cent in five years would require more than a miracle. They need to provide very comprehensive details on how such a miracle will be achieved. None has been provided

8. On lowering the cost of power, they promise to reduce system losses from 23 per cent to 10 per cent by strengthening the grid. This promise fails to appreciate that system losses are both technical and commercial. What we need most is an audit of these system losses because some are being caused by corruption. You can’t just focus on the technical side of the equation.

They also promise to “Invest in additional generation capacity at a lower 15 per cent cost.” This is a vague and incomprehensible statement. The Azimio team fails to address the thorny issue of IPPs and lopsided PPAs. Unless and until this is addressed, the promise for cheap power will remain a pipe dream

9. They promise affordable quality healthcare but no details are provided on what it will entail or how it will be financed. They also promise that retired civil servants will continue to enjoy medical cover at the expense of the government. How will this be financed? Imagine all those senior people in government with hefty medical covers continuing to drain the government all their life? Why not just make healthcare affordable to all?

10. Another issue close to my heart is that of Affordable Housing. The Azimio team has not made any promises on number of houses that will be constructed. They have just made qualitative and generic commitments

11. They have made a commitment to “Implementing minimum guarantee returns to our farmers.” This is another loaded promise that needs to be quantified and described in detail. How will it be funded or actualised while keeping cost of living down?

12. On the monster that is public debt, the document trivialises the issue by saying they will restructure the debt and seek debt forgiveness. Our costliest debt is domestic debt. How will they restructure that or seek forgiveness without destroying the financial system? They also promise to create a Debt Management Office. We already have that and it hasn’t helped in any way.

The issue of public debt is about the huge budget deficit we have been running. To deal with debt you need to raise revenues and lower expenditure. This is to be done such that the revenues grow at a much faster rate than spending. There is no shortcut to dealing with this issue. Lowering the budget deficit to acceptable levels will cure the debt problem in a sustainable manner.

The expansionist promises Azimio is making betray a serious lack of understanding of the fiscal predicament we are in. If they implement these proposals as promised, the public debt situation will worsen.

We as voters need to hold these politicians to account. If someone is not serious about the promises they are making, how will they run government if elected? How will they address the challenges we are facing if they do not understand them?

Please let us avoid politicising this issue. If this economy collapses we are all going to suffer regardless of which political side we support. As and when UDA releases their manifesto, I will also review it objectively.

How collaboration, clarity of scope and flexibility helps find to find balance between quality research and participant welfare