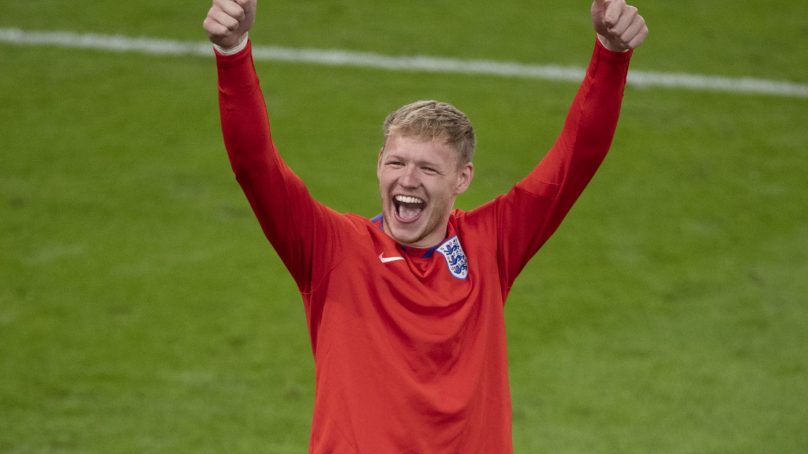 Arsenal are closing in on the signing of Aaron Ramsdale from Sheffield United after two other keepers slipped down their shortlist, according to reports. Ramsdale has been one of Arsenal’s top targets all summer as they look for further competition for Bernd Leno.

Despite suffering relegation in consecutive seasons with Bournemouth and the Blades, he has done well enough on an individual level. In fact, he earned a late call-up to the England squad for Euro 2020.

Even though he did not play at the tournament, it was a symbol of his rise to prominence. Now, for the second summer in a row, he could leave his relegated club for a Premier League move.

Recent reports suggested Arsenal were planning a bigger bid for the 23-year-old Ramsdale. There has since been progress, as Football.London now reports that talks are advanced over a deal that could reach £30 million ($42 million). Arsenal would pay £24 million ($34 million) upfront before making up the rest with add-ons.

Ramsdale was not in the South Yorkshire side’s squad for their EFL Cup game against Carlisle on Tuesday. However, manager Slavisa Jokanovic denied a transfer was the reason behind his absence.

Even so, it seems his move to the Emirates Stadium is nearing completion. He will keep Leno on his toes, offering the kind of stern competition the German international was lacking last season.

Arsenal originally signed Alex Runarsson to be their new backup option after the sale of Emiliano Martinez. However, the Iceland international disappointed and the club brought in Mat Ryan on loan from Brighton in January.

Ryan was more reliable but did not feature too heavily. Although there were rumours of a permanent move, it never came to be and he joined Real Sociedad instead. Interestingly, Ryan has revealed the club seemed to be leaning towards a homegrown option when choosing his successor.

“We enquired but we were told I wasn’t top of their list,” Ryan told Fox Sports of Arsenal’s decision not to sign him for good. “We got the impression they were looking for a homegrown keeper.”

That preferred option certainly seems to be Ramsdale. Given the criteria, Andre Onana is also no longer in contention.

Arsenal were considering a cut-price deal for Ajax’s Cameroon international keeper, who is currently suspended. Onana was punished in February for taking a prohibited substance, but had his ban reduced on appeal because he took it inadvertently.

Even so, he will be unavailable until November, and with his contract up next summer, Ajax are looking to sell.

A unique opportunity has presented itself, then, to sign one of the best goalkeepers outside Europe’s top five leagues for a cut-price fee. But Arsenal will instead be spending bigger on Ramsdale.

For Onana, it means he will have to look elsewhere, with one solution already emerging. According to Corriere Dello Sport, despite Arsenal’s enquiries, Inter Milan will win the race for his signature.

The Serie A champions are on the lookout for a successor to Samir Handanovic, who is still going strong at the age of 37. However, the Slovenian is in the last year of his contract and Inter will look for a long-term replacement in the not-too-distant future.

Handanovic may well stay on beyond the upcoming season, but Onana would likely overtake him in the hierarchy after joining as a free agent next summer. That said, the deal is not complete and remains simply an idea.