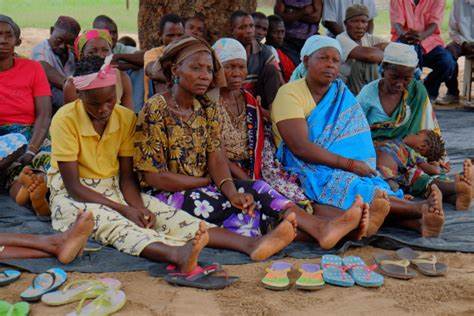 Mozambican police have confirmed that at least 50 people in the country’s northernmost province were beheaded this month by suspected Islamist militants.
The horrific attacks in gas-rich Cabo Delgado province took place in three villages in the districts of Muidumbe and Macomia over a week, according to commander-general of Mozambique’s police, Bernardino Rafael.
“They [the jihadists] burned the houses then went after the population who had fled to the woods and started with their macabre actions,” Mr Rafael told a media briefing.
The online media outlet Pinnacle News also reported that a football pitch in Muatide village was turned into an “execution ground” by the militants, said to have links with Somali terror group Al Shabaab. The latter is retained by Al Qaeda to cause terror in eastern Africa.
In the recent months, Al Shabaab has waged terror in Mozambique, killing scores and displacing thousands as they seek a foothold in the southern African nation in reported push to establish an Islamic caliphate spanning eastern and southern Africa.
In this week’s attackers took dozens of men and teenage boys who were attending an initiation ceremony to the sports field where they were decapitated and dismembered, the publication said.
Late last week two more men from Nanjaba village were beheaded and some women were kidnapped, by a different group of jihadists, the state-owned Mozambique News Agency has also reported.
The beheadings are the latest atrocities to occur in Cabo Delgado that have been blamed on a group of insurgents known locally as al-Shabaab (“the youth”), which claims to have links with the Islamic State terror group.
However, human rights groups like Amnesty International have also accused Mozambican security forces of murdering civilians and captured insurgents this year.
More than 2,000 people – half of them civilians – have been killed in the conflict since it began in late 2017, according to the US-based Armed Conflict Location and Events Data, a group that monitors violence in developing nations.
The United Nations estimates about 430,000 have been internally displaced by the fighting to date, with many refugees fleeing to the provincial capital Pemba, which has led to a humanitarian crisis in the port city.
The region’s main intergovernmental body, the South African Development Community, has declined to get involved in the conflict despite calls for help from Mozambique’s government, and the situation’s regional security implications.
But last month the European Union agreed to provide financial assistance and training to the country’s military, which has struggled to drive the insurgents from important towns and ports in 2020.
The fighting is also threatening to derail the development of massive gas fields located off Cabo Delgado’s coastline that could change the impoverished country’s fortunes.
In August, the strategic harbour of Mocimboa da Praia was occupied by al-Shabaab and the military has been unable to oust its fighters despite repeated attempts to do so.
Palma town in the province’s north, which is earmarked to become a manufacturing hub for liquid natural gas projects, is also threatened by insurgents. French oil and gas company Total SE has confirmed that a consortium it leads has secured nearly $20 billion (€17 billion) to invest in Cabo Delgado’s gas projects.
Earlier this year, however, US company Exxon Mobil postponed its final decision on whether it will also commit billions of dollars to develop gas projects in the region.