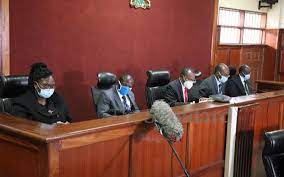 After years of being reduced to the marionettes by the executive, Kenya’s judiciary is finally taking bold steps to reclaim its powers and mandate that have been emasculated by the executive.

On Thursday, the High Court asserted itself when it trashed a constitutional amendment spearheaded by President Uhuru Kenyatta and opposition leader Raila Odinga they deemed was outside the process prescribed by the Constitution. The High Court verdict amplifies another Supreme Court that reversed the August 8, 2017 presidential election.

In an unprecedented move, the apex court overturned the Independent Electoral and Boundaries Commission’s (IEBC) decision to declare Kenyatta the winner, and ordered a re-run.

It was a first in Africa, where the judiciary is always at the beck and call of the executive. Law and constitutional experts aver the High Court has gone one better and it will be difficult to wrest control of the Bench from bold and progressive judges.

In the 2017 rerun poll Kenyatta “won” a competition in which he had no opponent after Odinga, who was leading the National Super Alliance (Nasa) charge, controversially withdrew from the race. A year later on March 9, 2019, Kenyatta and Odinga put their rivalry behind them through a symbolic “handshake” that kicked off the process to amend the constitution leading up to the Building Bridges Initiative.

Subsequently a taskforce that was formed thereafter was on Thursday voided as unconstitutional and illegal.

High Court justices Joel M. Ngugi, George V. Odunga, Ngaah Jairus, E. Chacha Mwita, Mumbua T. Matheka said in their ruling “…that Mr Uhuru Muigai Kenyatta has contravened Chapter 6 of the Constitution and specifically Article 73(1)(a)(i), by initiating and promoting a constitutional change process contrary to the provisions of the Constitution on amendment of the Constitution.”

The averment left the president with an egg on the face following a spell of executive bellicosity during which he warned the judiciary of unspecified consequences. Indeed, the president embarked on stripping the judiciary of its independence through his now famous cryptic “we hall revisit” after he was sworn in for the second term.

In the “historical context” of the ruling, the five judges cautioned against walking the same path Uhuru father Jomo Kenyatta took the country and mutilated the independence constitution, hence the historical injustices that have to date not been addressed despite numerous reports compiled on the subject.

President Kenyatta made good the “we shall revisit” ‘promise’ through budgetary cutbacks for the judiciary and declined to swear in 41 judges interviewed by the Judiciary Service Commission. On several occasions, Kenyatta has ignored court orders and constitution, which the five-judge Bench said that “…the Independent Electoral and Boundaries Commission does not have quorum stipulated by section 8 of the IEBC Act as read with paragraph 5 of the Second Schedule to the Act for purposes of carrying out its business relating to the conduct of the proposed referendum including the verification of signatures in support of the Constitution of Kenya Amendment Bill under Article 257(4) of the Constitution submitted by the Building Bridges Secretariat.”

The president has persistently ignored crucial appointments to constitutional offices and critics explain it as a calculated commission of omission to skirt around responsibility. Where it matters, critics say, he has strategically placed his henchmen to shield him from legal and constitution questions.

During recent interviews for chief justice and Supreme Court judges, this issue was raised with examples being given for the public service, the police, the army, the Kenya Revenue Authority, Central Bank of Kenya, the judiciary and key state corporations all headed by people from his Kikuyu community, which is against the constitution.

His long-time ally since their days in Kanu more than 20 years Justin Muturi is speaker of the National Assembly and his controversial decisions are seen as designed to cushion the president accusations illegal decisions.

The bad blood between the president and the executive it a nadir when former Chief Justice David Maraga declared 12 Parliament unconstitutional for failing to pass laws to implement the one-third gender requirement in public office appointments.

Justice Maraga admonished the president: “I have before me six petitions seeking that I advise you to dissolve Parliament under Article 261(7) as read with Articles 27(3 and 8), 81(b) and 100 of the Constitution. Besides the Law Society of Kenya, the other petitions were filed by ordinary citizens, namely Margaret Toili, Fredrick Gichanga Mbugua’h, Stephen Owoko, John Wangai, Aoko Bernard and former member of Parliament David Sudi.”

On the basis of the president’s commission of omission, Maraga declared Parliament illegitimate, and asked the president to void it.

“The petitions are based on the ground that despite four court orders compelling Parliament to enact the legislation required to implement the two-thirds gender rule in accordance with Article 27(3) as read together with Articles 81(8) and 100 of the Constitution, Parliament has blatantly refused and /or neglected to do so,” Maraga explained his decision.

Legal experts have weighed in with questions about the competence of the president’s advisors. Kenyatta’s former advisor on constitutional matters and former Mandera Central MP Abdikadir Mohammed took to social media to express his views.

“Every Kenyan should savour this moment and celebrate the Kenyan Judiciary! Make no mistake. It took courage. Just look at the national shame that is Parliament,” Abdikadir posted on Twitter.

His admonition of the executive and legislature amplifies allegations that had been made earlier in the week by Gatundu South MP Moses Kuria, who announced that he had received Ksh100,000 ($1,000) to support the nomination of Amos Kimunya to House Majority Leader position in the National Assembly following the ouster of Aden Duale. Duale had been sacrificed for his unwavering support for Deputy President William Ruto.

Kuria, Kiharu MP Ndindi Nyoro and Nyali MP Mohamed Ali have been summoned by Muturi to clarify the disparaging their remarks against MPs who supported the BBI Bill. Allegations of bribery were also made during the voting for the Bill in the 47 counties, with 44 giving the amendment the nod, one abstained and two opposed.

The High Court ruling has exposed the president’s underbelly and despite Attorney General Paul Kihara Kariuki’s imminent move to appeal the verdict, Makueni Governor Kivutha Kibwana, a constitutional lawyer, says the verdict is beyond appeal.

Prof Kibwana posted on Twitter, “Justices Ngugi, Odunga, Ngaah, Matheka, Mwita have shown unmatched patriotism. Their judgement has elevated Wanjiku to the pedestal she/he deserves. Very difficult to appeal. The David Judiciary has faced the Goliath Executive/Parliament. Nobody is above the law.”

In response, President of the Law Society of Kenya Nelson Havi referred to protests that had been registered Siaya Senator James Orengo and Rarieda MP Otiende Amollo, who expressed concern that the manner in which the amendments had been championed was setting a bad precedent. The two were censured, but did not recant their comments.

The thread was sustained by Charles Nderitu, “SC Orengo and SC Amollo tried to raise issues but they couldn’t be listened to. Wacha wale ujeuri wao (let them pay for their guile). The president should, with immediate effect, fire all his legal advisory team including the attorney general.”