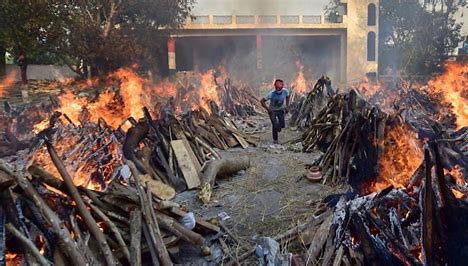 ‘India’s Covid death may be far above 200,000 as rural cases are unregistered’

India has reached the devastating figure of 200,000 coronavirus deaths, with the pressure on many hospitals showing no sign of abating amid a surging second wave.

The real number of fatalities is thought to be far greater, with many not being officially recorded.

Oxygen supplies remain critically low across the country, with the black market the only option for some people. Crematoriums are operating non-stop, with makeshift pyres in car parks.

There have been at least 300,000 new infections every day in the past week, with more than 360,000 new cases in the past 24 hours on Wednesday this week. Overall, more than 17.9 million cases have been registered.

Foreign aid has started to arrive from the UK and Singapore. Russia, New Zealand and France have pledged to send emergency medical equipment, and even regional rivals Pakistan and China have put aside their differences and promised to help.

However, experts say the aid will only have a limited effect in a nation that has a population of 1.3 billion. A government website where Indians can register for a vaccination programme crashed soon after it launched on Wednesday, as tens of thousands of people tried to access it.

And in the state of Assam, 6.4 magnitude earthquake damaged hospitals that were already under intense strain. People ran from their homes and other buildings in panic.

Mortality data in India is poor and deaths at home often go unregistered, especially in rural areas. There are reports of journalists counting bodies at morgues themselves, to try to get a more accurate number.

In Uttar Pradesh, health officials said 68 people had died on one day earlier this month across the state. But a Hindi newspaper pointed out that officials also said there were 98 Covid funerals in the capital, Lucknow, alone.

Crematoriums are working throughout the night and using empty spaces like parks and carparks to build makeshift funeral pyres.

One man in Uttar Pradesh was investigated for spreading a “rumour with an intent to cause fear or alarm” by asking for help to find oxygen for his sick grandfather on Twitter. It caused widespread anger, and the man could face jail.

Crematoriums continue to work throughout the night to keep up with the number of bodies arriving, and many families are facing long waits before their loved ones can receive funeral rites. Some say they were asked to help speed up the process by piling the wood themselves.

In the southern city of Bengaluru, one doctor told the BBC people were panicking. It is one of the worst-hit cities in India, with some estimates saying there are about 300 active Covid cases per square kilometre.

The BBC’s Ashitha Nagesh spoke to the senior consultant at a government hospital, who asked to remain anonymous.

“We were not prepared for this second surge,” the consultant said. “For the first surge it was well organised – as soon as we came to know [of the virus] everything was streamlined and we were much better prepared. This time there are more cases, it was more sudden, and the situation was not prepared for.”

With most hospitals overwhelmed, families are having to find ways to treat loved ones at home. Many have turned to the black market, where prices of drugs such as remdesivir and tocilizumab and oxygen cylinders, have soared.

But even in this market, supply is no guarantee, reports the BBC’s Vikas Pandey in Delhi.

“I know a family that cobbled together money to buy the first three doses of remdesivir from the black market, but couldn’t afford to get the remaining three as prices shot up further,” a BBC correspondent says. “The patient continues to be critical.”

Some private jet companies have reported a spike in business, as people try to fly their sick relatives to other hospitals in India.

“It’s basically families of patients who are looking to get into a hospital and are trying to see if there are any beds in other parts of the country,” Ashish Wastrad, head of Air Charter Service’s Mumbai office, says.

However, he said the company’s planes were not properly equipped to carry Covid-positive patients.

The World Health Organization (WHO) reported in its weekly epidemiological update that there were nearly 5.7 million new cases reported globally last week – and India accounts for 38 per cent of them.

It also said that the B.1.617 variant of the virus detected in India has a higher growth rate than other variants in the country, suggesting increased transmissibility.

India is carrying out the world’s biggest vaccination drive, but less than 10 per cent of the population has so far received an initial jab, and as infections continue to surge, there are concerns about meeting the demand.

The US is helping India with the raw materials it needs for vaccine production, after India’s biggest vaccine maker, the Serum Institute of India, complained of shortages of specialised imports from the US.

Meanwhile, the first batch of the Russian vaccine, Sputnik V, is set to arrive in India on May 1, The New Indian Express reports. It has not yet been revealed how many doses will be delivered.