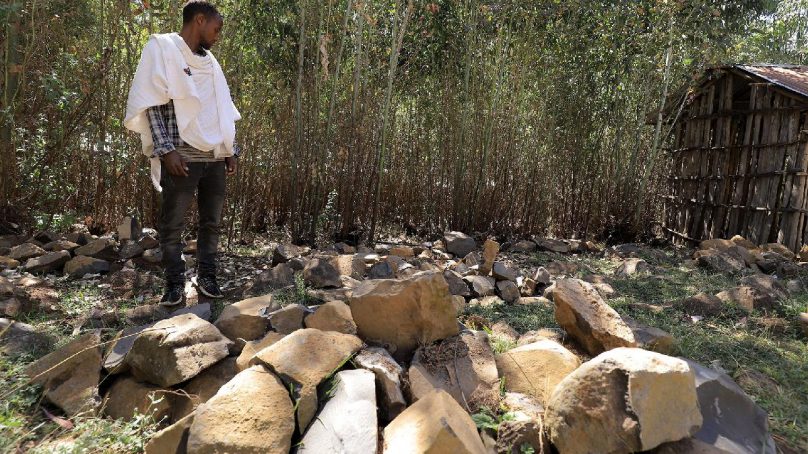 In the dappled shadows of a glade of cypress and eucalyptus, a deacon of the Ethiopian Orthodox Church adjusted his roughly-spun cotton shawl and knelt by a white-washed grave.

“He was my best friend,” Betsiha Derresse said. “We did everything together – sleep, work.”

In August, civil war reached the thin air of this town in the Amhara region, 3,000 metres up in a mountainous landscape once home to Ethiopia’s ancient rulers. Forces from neighbouring Tigray province had arrived. The delicate-framed Betsiha, 28, said he and many others hid in the forest, but his friend and fellow deacon, Mulat Aynekulu Mekonnen, turned back to collect a book.

The Tigrayan fighters “started to shoot at us, so we had to run away en masse,” Betsiha said. Mulat went back. “He said he would not leave without his psalm book.”

When Betsiha returned to his church three days later, he found 35-year-old Mulat’s body, he said. He’d been shot dead.

The head of the mayor’s office, Belete Asrate, said Tigrayan fighters killed 27 civilian men in the town. He, Betsiha and two others said the victims were unarmed. Another person said some of the victims were carrying weapons. None of these people witnessed the killings.

Townspeople said more than 70 women were raped by Tigrayan fighters. Reuters met three of the women and spoke to health-workers, local officials and federal prosecutors. The Tigrayan perpetrators were young, said Agere Yaynalem, a 37-year-old woman, who said she was raped multiple times and left unconscious.

“I appealed to them,” Agere said. “Do you not have sisters? Think of them!” She asked that Reuters identify her by name and use her photo in this report. “The worst has already happened to me,” she said.

Since civil war erupted over a year ago in Ethiopia’s Tigray region, Reuters has reported atrocities by all sides. Accounts of abuses in Nifas Mewcha and other towns in Amhara, documented by Reuters, are pulling into focus the role of the Tigray People’s Liberation Front in the war.

Tigrayan forces are ultimately commanded by leaders of the TPLF, which dominates Tigray and once controlled the Ethiopian government, although many foot soldiers are not TPLF members. Arrayed against them are Ethiopia’s federal army, as well as troops from the neighbouring country of Eritrea and from Amhara region.

The conflict has claimed thousands of civilian lives. It has plunged 400,000 people into famine conditions and left 9.4 million in need of food aid across northern Ethiopia, according to the United Nations. Around 60,000 people have poured across the border into Sudan, the UN says.

For eight months, the fighting was in Tigray. Allegations of killings and mass rape were documented by the media and human rights organisations. From July, the war spread southward and eastward. Tigrayan fighters invaded the neighbouring regions of Afar and Amhara.

In November, Amnesty International reported accusations that Tigrayan fighters committed rapes, looting and assaults in Nifas Mewcha. Amnesty wasn’t able to visit the town, basing its report on phone interviews with residents. The TPLF promised to investigate the alleged rapes and “bring perpetrators to justice.”

After the recent recapture of hundreds of square miles of territory in Amhara by the Ethiopian army, some journalists were able to travel to Nifas Mewcha and other towns in late November. Witnesses such as Betsiha gave accounts of killings in Nifas Mewcha, reported for the first time here, and Agere and other women provided reporters with on-the-record allegations of rape that support London-based Amnesty’s report.

The TPLF didn’t respond to questions about the claims of killings and other detailed inquiries for this article. TPLF leaders have repeatedly denied that Tigrayan forces have committed wide-scale abuses and have called for independent international investigations.

“I can’t vouch for each and every off-breed idiot who masquerades as a fighter,” spokesman Getachew Reda told Reuters in July. “There are millions of (men with) guns there.”

To some outsiders, Ethiopia’s strife has been viewed largely as the handiwork of Abiy Ahmed, the country’s 45-year-old prime minister.

Some international observers have accused Abiy and his forces of attempting to crush Tigray and its 5.5 million people. Pekka Haavisto, the European Union special envoy, said in June he was told earlier this year by Ethiopia’s leaders in closed-door talks that “they are going to wipe out the Tigrayans for 100 years” – an allegation the government strongly denied.

US Secretary of State Antony Blinken told Congress in March that “acts of ethnic cleansing” were taking place in western Tigray, although he did not apportion blame.

Across much of Ethiopia, however, many blame the political leadership of Tigray – the TPLF – for the bloodshed. A former Marxist-Leninist guerrilla movement, the TPLF led a coalition that dominated power from 1991 until Abiy – a former cyber intelligence chief – took control in 2018. In May 2021, the Ethiopian parliament designated the TPLF as a terrorist group.

The civil war began in November 2020 after months of increasing tensions, with each side accusing the other of a military build-up. The spark was an all-out assault by Tigrayan forces against military bases and federal offices in Tigray, according to written witness testimony from Ethiopian soldiers and alleged planning documents seen by Reuters.

Abiy enlisted the support of the army of Eritrea. Many of the massacres in Tigray that followed were blamed on Eritrean troops. There were also killings by Ethiopian federal troops and militiamen from Amhara, a joint UN-Ethiopian Human Rights Commission investigation found. As Reuters has reported, the abuses included torture, killing of civilians and gang-rapes.

Eritrea has denied that its soldiers are responsible for such abuses. Abiy’s government has previously said it has assurances that Eritrea will hold any perpetrators to account. And Abiy has promised to investigate allegations against Ethiopian troops. Amhara regional officials have dismissed accusations of atrocities by Amhara forces as groundless.

Media reports have also revealed abuses by Tigrayans, including the massacre of more than 200 ethnic Amharas in the town of Mai Kadra, and the killing of many Eritrean refugees in the far northwest.