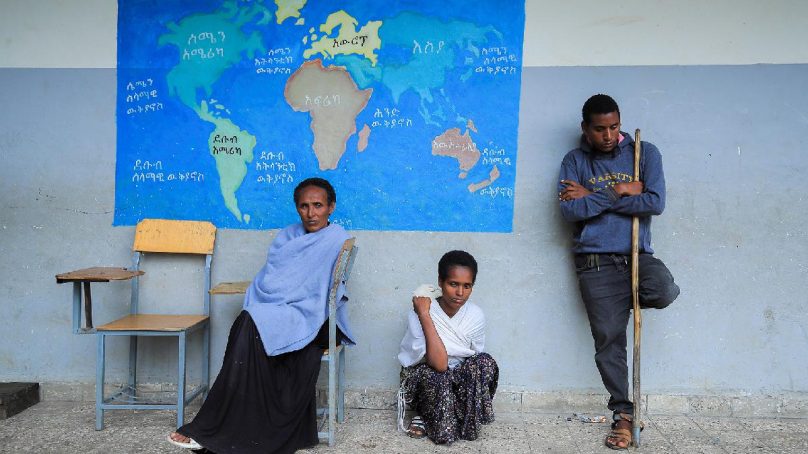 Reda did not respond to queries about whether the TPLF would carry out investigations and punish those responsible.

In his dimly lit government office in Addis Ababa, cloth-capped former rebel Aregawi Berhe, who founded the TPLF in 1975 with six others, recently was playing tranquil ambient music from his computer. Aregawi is far from the battlefield.

He parted decades ago with his old TPLF friends, who he lambasts as “corrupt, degenerate goons.” He now holds a high-ranking Ethiopian government position after decades in exile.

When a Reuters reporter visited Aregawi on November 30, TPLF-commanded columns, known as the Tigray Defence Force, were advancing hundreds of miles south from Tigray along three parallel roads – arrayed like a trident poised to skewer Addis Ababa.

The TPLF-led army had advanced swiftly and unsupported into enemy territory, Aregawi said. But without taking Addis Ababa and reaching their objective, the Tigrayans were highly vulnerable to being cut off. TPLF-led forces had invaded provinces – Afar and Amhara – hostile to the Tigrayan forces. That made the advance doomed, he predicted.

In the 1980s, Aregawi broke with the TPLF, then a Marxist party that followed the Soviet model. He later founded a party that promoted a liberal democratic vision for Tigray.

The TPLF came to be dominated by its leader, Meles Zenawi, who ruled Ethiopia from 1991 until his death in 2012. While winning praise for overseeing economic growth and development, Meles’ Ethiopia was marked too by bouts of mass arrests, torture and killings, as documented at the time and in annual US State Department reports.

TPLF figures from that time are now helping to lead the Tigrayan war effort. One is a former Ethiopian army chief of staff, Lieutenant General Tsadkan Gebretensae. Tsadkan left the TPLF and his post as army commander in a disagreement over how to conduct Ethiopia’s 1998-2000 border war with Eritrea. He wanted to march on Eritrea’s capital.

Tsadkan has come out of retirement as a key figure in the TPLF’s military struggle against Addis Ababa.

Tsadkan didn’t comment for this article. But he had previously said by phone that he spent months trying to mediate between Abiy and the TPLF, but Eritrea’s involvement left him no alternative but to take up arms.

“The Ethiopian government invited foreign forces to invade our country, so the choice was either to surrender to foreign forces or Abiy’s forces, or join the resistance. I chose the latter,” he said.

Another force behind the scenes in Tigray is a former head of Ethiopia’s intelligence service, Getachew Assefa, according to two people who are in contact with the TPLF leadership. Prosecutors have charged Getachew in absentia with torture, murder and other alleged crimes during his time in intelligence. He has not publicly addressed the accusations. Getachew and the TPLF did not respond to questions for this article.

The road to civil war, Aregawi said, echoing a view shared by some other analysts, began soon after Abiy emerged as a compromise candidate for prime minister in 2018. Once in power, conflict became inevitable, many analysts believe, when Abiy decided to challenge the TPLF’s political and economic power simultaneously.

Abiy quickly identified the TPLF as a barrier to reform, accusing them of attempting to wield power behind the scenes.

Gedion Timothewos, Ethiopia’s attorney general and minister of justice, said any attempt to overhaul the economy meant taking on the TPLF. Companies such as METEC, a state-owned metal and engineering company, were led in the past by people allied with the TPLF and awarded huge government contracts, Gedion said.

Tigrayan Major General Kinfe Dagnew, the chief executive of METEC for eight years until Abiy took power, was arrested on corruption charges in November 2018. His lawyer, Haftom Kesete, said that Kinfe, who is in jail, has pleaded not guilty to all the charges and has been acquitted of some. Others are still pending.

Gedion said millions of dollars paid by the government to METEC for constructing Ethiopia’s nearly $5 billion Grand Ethiopian Renaissance Dam, a flagship hydroelectric project on the Blue Nile, had been syphoned away. “Almost half of it was paid upfront and we had nothing to show for it,” he said.

Zelalem Fikadu, deputy director general for the Corruption Department, said in one instance METEC got 16 billion Birr ($330 million) in state money for hydraulic and electrical works on the dam. Of that, 7 billion Birr was completely unaccounted for. The matter was still under investigation, he said, with no charges yet filed against any individuals. The government-run METEC doesn’t exist in its previous form.

Attorney General Gedion said it is unclear where the money went. Kjetil Tronvoll, a professor of peace and conflict studies in Oslo and a scholar of the TPLF with close contacts in the party, said the focus on the TPLF as the nexus for personal corruption was a “false narrative.”

He said there is corruption among elites from other ethnic groups. Some Tigrayans say the case against Kinfe is politically motivated.

The arrest of several TPLF leaders on corruption charges led other party figures to flee to Mekelle, the Tigrayan capital, with both sides feeling a showdown was inevitable.

In September 2020, Tigray defied the federal government, which had postponed national elections due to COVID-19, and held its own regional polls. It declared Abiy’s government illegitimate. Ethiopian lawmakers blocked federal funds to Tigray.

“War was pretty much inevitable at that point,” said William Davison, Ethiopia analyst at the Brussels-based International Crisis Group think tank. Tigrayan leaders in Mekelle “made it clear they would not sit there passively and allow the federal government to use the powers that they had at their control to weaken Tigray.”

As rest of world grapples with soaring numbers of Covid infections, Africa praised for coordinated response