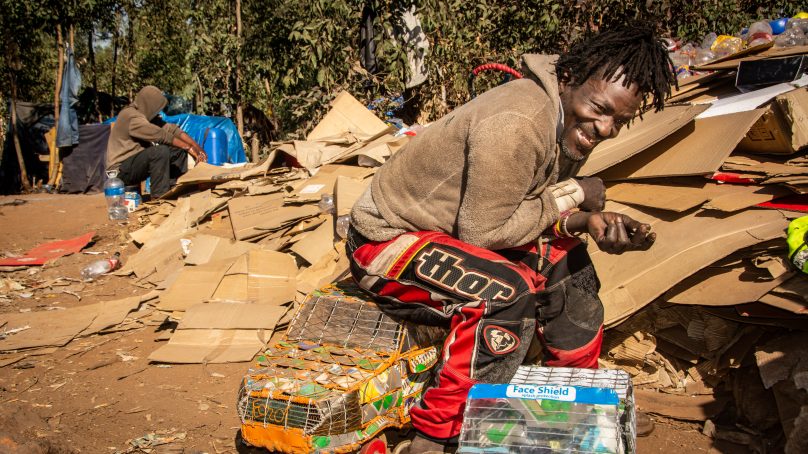 For the “Bagerezi” – informal recyclable material reclaimers – Covid-19 was just one extra thing to worry about. They face many more immediate dangers every day and are subject to every kind of disadvantage: homelessness, hunger and exposure to the elements, ostracism, exploitation, harassment and threats of eviction.

The Bagerezi (the name they have given themselves means “hustlers”) scratch out a living by collecting recyclable materials from suburban rubbish bins and selling them on to middlemen and big recyclers.

In Tshwane, their role has stirred up a landfill of human rights issues and exposed fundamental flaws in the city’s waste management system.

Opinions on the Bagerezi are polarised. They exist because of an economic opportunity created by the failure of the city and its residents to establish an efficient recyclable material collection and sorting culture.

The associated social and legal complications that arise from the Bagerezi filling this recycling gap have thus been created, in part, by the residents.

On rubbish collection days, members of the Bagerezi drag large quantities of PET (polyethylene terephthalate) plastic, cardboard, glass and aluminium in makeshift carts to collection points, where resellers or large recyclers pay them in cash.

This is the lowest point of entry to the R15 billion ($1.023 billion) waste economy in South Africa but the Bagerezi cannot be counted as part of this economy, because they are not formally employed. They receive no logistical or occupational health and safety support; they have no bargaining power, no UIF and no living wage.

But their combined contribution is hefty. The Council for Scientific and Industrial Research (CSIR) estimated in a study conducted in 2014 that the Bagerezi’s efforts saved municipalities on average about R500 million ($34.2 million)

The CSIR report, released in 2016, stated: “It is clear that the informal sector is playing an important role in the recovery of recyclables at little to no cost, to the direct benefit of government and industry. The informal sector still provides an opportunity to further increase recycling rates, however, one must be cautious not to exploit pickers in this process, or, in light of the drive for “decent jobs,” encourage the further growth of the informal sector.”

The logistics of informal waste picking require the Bagerezi to separate and stockpile recyclables in the suburbs, close to where they collect. As a result, they occupy empty land, which is often private property. The occupation of the land is illegal and the recycling activities contravene various zoning regulations and by-laws.

Because transport is unaffordable, the Bagerezi have to live where they work. This compounds the problem of land occupation and creates additional sanitation and social problems.

Private landowners have the legal right to evict anyone illegally occupying property, but attempts to force groups of indigent recycling communities out of neighbourhoods have become a human rights matter. Louise du Plessis of Lawyers for Human Rights (LHR) said the legal argument hinges on the socioeconomic right to food and shelter, which is why LHR has become involved in some eviction cases involving the Bagerezi.

In a 2014 integrated waste management plan, the City of Tshwane admitted to shortcomings in its waste management strategy, and that there was “an urgent need to divert all recyclable waste, on a large scale, from the remaining landfill sites.”

The Bagerezi, particularly given the data collected by the CSIR, can provide a potential solution that would benefit all parties.

Stefan van der Westhuizen, through his NGO RubiconZA, has been working with Bagerezi communities in Centurion – in total about 700 people – for more than five years. His vision is to achieve recognition for the Bagerezi and formal inclusion in the waste management system.

RubiconZA, along with other humanitarian non-governmental organisations, established a negotiations forum with the City of Tshwane in November 2019. In the first meeting a city official acknowledged that this forum was the first of its kind: “Where the city and the informal recyclers would engage formally and work together as a unit.”

But not much has happened. NGOs and Bagerezi have expressed frustration with the slow pace of progress. In a meeting with NGOs in August 2020, the Tshwane city waste management division flip-flopped on making any commitments to land allocation for the Bagerezi.