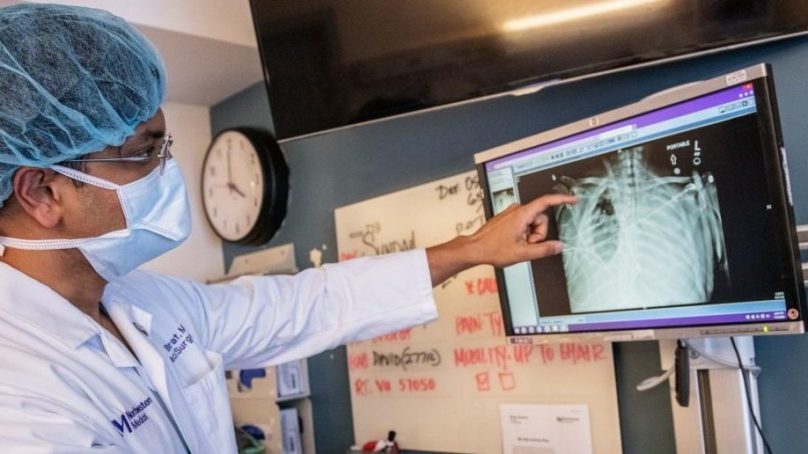 One of the astonishing aspects of the human response to the coronavirus pandemic has been how quickly scientists pivoted to studying every facet of the virus in order to mitigate the loss of life and plan for a return to normalcy.

At the same time, a lot of non-coronavirus research has ground to a near halt.

With research labs and offices shuttered for all but essential workers, many scientists were stuck at home, their fieldwork and meetings cancelled and planned experiments kicked down the road as they struggled to figure out how to keep their research programmes going.

Many took the opportunity to catch up on writing grants and papers; some – in between caring for kids – came up with strategic workarounds to keep the scientific juices flowing.

To gauge how researchers in different fields are managing, Knowable Magazine spoke with an array of scientists and technical staff – among them a specialist keeping alive genetically important strains of fruit flies, the maintenance chief of an astronomical observatory working to keep telescopes safe and on standby during the lockdown and a paediatrician struggling to manage clinical trials for a rare genetic disease.

Here are a few slices of scientific life during the pandemic.

Agnieszka Czechowicz’s father suffers from severe Parkinson’s disease. The coronavirus pandemic forced him to remain indoors and away from people, robbing him of the physical conditioning and social interactions he needs to cope with his disease.

A recent fall left him in hospital, bringing the additional worry that he might contract Covid-19 there and isolating him further.

For Czechowicz, his situation brought into sharp relief the challenges the coronavirus has forced upon those carrying out clinical trials, including those she is running, which involve patients traveling to hospitals around the country.

“Would I have him travel to any clinical site right now for a new Parkinson’s treatment?” she says. “Absolutely not.”

The pandemic forced Czechowicz to halt clinical trials she oversees for a rare genetic disease of children called Fanconi anaemia, a condition that impairs the body’s ability to repair damaged DNA and often leads to bone marrow failure and cancer.

The treatment Czechowicz and colleagues are testing involves extracting blood-forming stem cells from the patient’s bone marrow, inserting a healthy copy of a missing or malfunctioning gene and then reinfusing those cells back into the patient.

“Every aspect of what I do is massively impacted by the pandemic,” Czechowicz says. One of her early-stage clinical trials involves testing the safety of the therapy.

But during the initial shutdown, which started in mid-March and lasted for two months, her patients could not readily travel to Stanford for the necessary follow-up visits, and remote monitoring was difficult.

“There’s special blood testing and bone marrow testing that we need to do. In particular, it’s critical to get the samples to make sure the patients, for example, are not developing leukaemia,” she says. “There’s no way to know that without really checking the bone marrow.”

She had to clear large hurdles to get her patients evaluated.

Another early-stage trial, designed to determine the effectiveness of the therapy, also had to stop enrolling new patients. Because speed is important when it comes to treating Fanconi anaemia – the children are likely losing stem cells all the time – any delay in treatment can be a source of great anxiety for their parents.

Czechowicz had to explain to them why the trials were temporarily halted. “It was really challenging to have these discussions with the families,” she says.

With the easing of travel and workplace restrictions, the families began travelling to Stanford in June, but with infections back on the rise, many families are becoming hesitant again, says Czechowicz.

Fortunately, her trials are small, so she can guide each family through the process of safely resuming the trials and continuing with follow-up.

Her own team also has to follow strict safety protocols. For example, even though her lab has 10 members, only two can be in the lab at any one time, and only one parent is allowed into the clinic with the child.

Not all clinical trials can pay such close attention to individual patients. Large trials with hundreds of patients can involve multiple sites and require much more monitoring, so resuming those remains difficult.

Also, restrictions on working full bore are slowing the pipeline for new therapies. “The impact of that, we’re not going to see for many years to come,” Czechowicz says.

In December 2018, well before the coronavirus pandemic began, the LHC shut down for upgrades. Housed in a 27-kilometre-long tunnel about 100 metres underground, the LHC accelerates two beams of protons, one clockwise and one counter-clockwise and makes them collide head-on at four locations.

There, four gigantic subterranean detectors — ATLAS, CMS, LHCb and ALICE — sift through the debris of particles created by the collisions, looking for evidence of new physics.

For its next set of experiments, which aim to probe the properties of subatomic particles with greater precision, the LHC needed to increase the intensity of its proton beams.

Consequently, the four detectors needed to be upgraded too, to handle the resultant higher temperatures and increased radiation at the sites of the particle collisions. The work was on track for a restart around May 2021 until the pandemic swept all the scientists’ careful plans away.

The LHC and its four detectors are each run by a separate collaboration. CERN, which manages the LHC, is hopeful it can restart the collider by February 2022.

“They think that they can get the accelerator going if there are no more major catastrophic events,” says physicist Abolhassan Jawahery. But the impact on the four detectors is less clear.

For the LHCb upgrade, Jawahery’s team at the University of Maryland had been working on building about 4,000 extremely sensitive electronic circuit boards. These boards have to be “burned in” before they can be sent to CERN.

“We put them in an oven, literally cooking the boards and then running extensive tests in order to get them ready so that we can put them in the accelerator and run them for 10 to 20 years,” says Jawahery. “And none of that could be done during the pandemic shutdown.”

The team resumed its work in June, but with restrictions put in place by the state of Maryland. Jawahery runs two labs, and for months was allowed only two people at a time in one lab and three in the other, making progress extremely slow.

Still, his team is fortunate that it does not depend on supplies from countries hit hard by the coronavirus. Other labs weren’t so lucky.

How govts criminalised Press Freedom in the name of ‘infodemic’ control