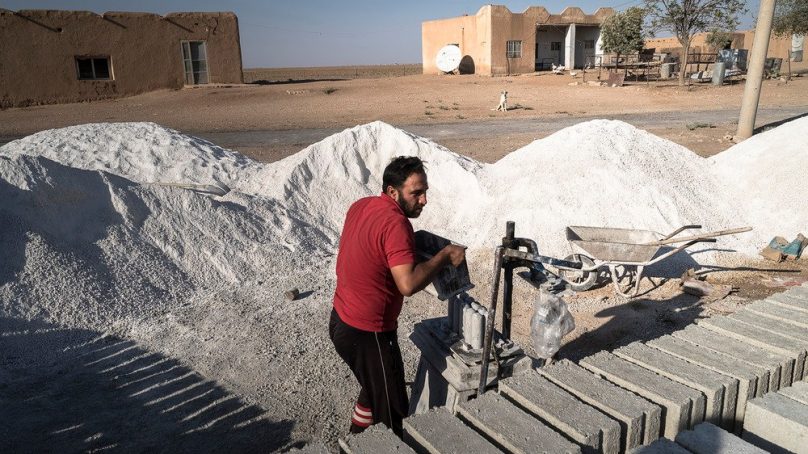 The huge silos at the roundabout as you enter Syria’s Hassakeh city are decorated with giant pictures of Abdullah Öcalan, leader of the Turkey-based separatist Kurdistan Workers Party (PKK), as well as flags from the military arm of the local Kurdish-led administration.

There is still some corn in the silos, but by next year they might well be empty. A dangerous combination of climate change and politics – neighbouring Turkey controls the closest water station and opposes the Kurdish-led government because of its ties to the PKK, which it considers terrorists – is driving water and electricity shortages, and raising concern over the food supply for millions in north-eastern Syria.

Similar problems, including low rainfall and high temperatures are plaguing large swathes of Iraq. In total, aid groups have warned that the water crisis threatens 12 million people in the two countries.

Walking across his land in Umm Hejera, a small village near Hassakeh city, Amer Meslet looks off into the distance, into the centre of Syria’s water woes. It is around noon on a September day, and it is an unseasonably stifling 40 degrees Celsius, with no clouds on the horizon.

“Last year, each dunum [around a quarter acre] of land provided us with 400 kilos of crops that we could sell as animal feed. We were also growing tomatoes, watermelons, and potatoes for our family,” Meslet says. He owns 120 dunums of land, but “this year, there was no rain, and we could not harvest a single crop.”

When Meslet describes the impacts of the water crisis, which the UN estimates has hit many of the more than four million people in Syria’s northeast, he sounds like an accountant taking stock of inventory. But for him and his family, this is life and death. “We had 50 sheep, now we are left with 22,” he says. “Our cow should have delivered a calf, but she got sick due to contaminated water, and lost it.”

Umm Hejera is home to 15 families. Like many people in the wider Hassakeh province and beyond in northeast Syria, they all rely on agriculture to survive. At 33, Meslet, a father of two who also supports his father and several siblings, is old enough to remember when the fields were flourishing, and the region was known as the “breadbasket” of the country.

But over the past year, an extremely scarce rainfall season in the summer of 2021 collided with disruptions at Alouk, the Turkey-controlled main water station that serves much of northeast Syria, making it difficult if not impossible to irrigate fields.

Officials in the Kurdish-led administration that runs the region blame Turkey for the closures at Alouk and for slowing the amount of water that flows into the country via the Euphrates River.

Turkey, where rainfall has been low too, denies that it is purposely drying out the northeast, and while the factors contributing to the shortages are complex and intermixed, on the ground it is clear that people are struggling to access clean water, empty fields are driving up food prices, and new health problems are emerging.

While it may not seem like an obvious poster child, “Syria is one of the countries worst hit globally by the climate crisis,” according to Alfredo Impiglia, Damascus-based chief technical adviser of the UN’s Food and Agriculture Organisation (FAO).

FAO statistics show that although the 2020-2021 rainfall season was scarce, it was not the driest ever recorded. Impiglia explains that conditions the UN has called “drought-like” aren’t just down to rain levels: “The problem is with the distribution of rain. It might rain a lot but for a shorter period of time. And this, together with more recurrent heat-shocks, has a catastrophic effect on crop production.”

Impilgia says that when all is said and done, it is likely that this year’s harvest, which ended around late September, will hit a “historic low” in Hassakeh, Raqqa, and Deir Ezzor, the main parts of northeast Syria that grow grain. In a September 2021 overview of its plan to deal with the northeast’s water crisis, the UN estimates a total loss of up to 75 percent of rain-fed crop yields in Hassakeh province, and up to 25 percent for irrigated crop yields across the northeast.

To make matters worse, fires in the northeast – some the result of shelling between Turkish and Kurdish forces, others likely accidental or spurred on by the increasingly hot and dry conditions – have also burned hundreds of thousands of acres of farmland in recent years.

Combined with an economy that was already struggling from an inflated currency, pandemic-related economic woes, and a “bread crisis” that has already seen prices rise, the low crop yields are expected to make food more expensive for many people who have less money to spend.

The meager rains have been catastrophic for northern Iraq, too.

A December 16 statement by the Norwegian Refugee Council says that one in two families the group surveyed in “drought-affected” areas of the country say they need food aid, while one in five don’t have enough for everyone in the family to eat.

“Communities across Iraq have faced damaging losses to their crops, livestock, and income,” the statement says. “Children are eating less, and farmers and displaced populations are hit hardest.”

Climate change is not the only factor that is causing northeast Syria to run dry. Conflict is a major driver of the crisis too.

As is clear by the signage on Hassakeh’s silos, much of the territory in the northeast is run by a Kurdish-led administration (led by the Democratic Union Party, or PYD, which Turkey considers terrorists due to its ties to the PKK).

The region also hosts the presence of the government of Syrian President Bashar al-Assad, as well as Russian and US troops. Since October 2019, when Turkey launched a cross-border offensive that it said was intended to remove Kurdish fighters from the area, the Turkish military has occupied a 90-kilometre strip of land in Syria’s north.

Turkey’s incursion left it in charge of Alouk, a water station that provides drinking water, as well as water for irrigating crops, to around 500,000 people in Hassakeh and its surroundings. As of July, the UN said that water flow from Alouk had been interrupted 24 times since Turkey took Alouk, sometimes for months in a row.

This has forced many people, including Meslet, to rely on trucks that bring water from wells in the Hassakeh countryside. But this is costly, especially given the myriad economic pressures and the fact that the almost non-existent harvest means he’s not making any money from farming.

“Until last year, we were getting drinking water from Alouk,” explains Meslet. “But since last spring, they cut the flow and we barely have any water. Most of the time, we rely solely on the water we buy from the trucks.”