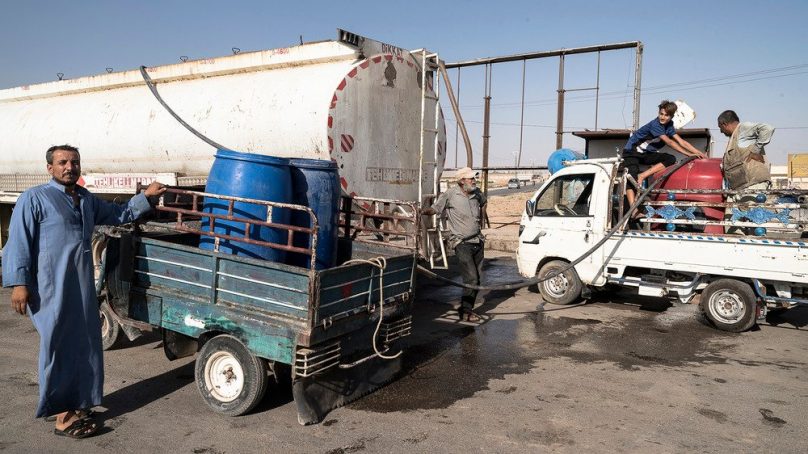 In addition to farming, Amer Meslet works as a brickmaker, which brings in 100,000 Syrian pounds a month (around $30). Without any harvest, that is all of his income, and Meslet says he now spends half of this on water, either for his family’s needs or to feed his animals.

Climate change and political instability in the Middle East combine to create a humanitarian crisis that the rest of the world gets glimpses via occasional media reports.

Even that (Meslet’s earnings) is not enough. Meslet, who wears an old red polo shirt and Adidas track pants that are dirty from the farm, says the family has had to even cut down on showers. “We stick to one shower per week, using water from the trucks. We stopped washing ourselves with water from [nearby] makeshift wells, because my kids developed skin rashes and were covered in red spots.”

A few of these trucks are sent by UN agencies and NGOs and are gratis, but most are private. A June 2021 assessment by the humanitarian data provider REACH said that “the high cost of water trucking [in the northeast] is preventing households from accessing sufficient water, as it is reported as a barrier in 43 per cent of communities assessed”.

Sozdar Ahmed, geologist and former co-chair of the water department at Hassakeh’s municipality, believes that Turkey is purposely cutting flow from Alouk. As she puts it: “Turkey is trying to dry us out.”

Ahmed has been on the front line of the water crisis since it began: As soon as Turkey took control of Alouk two years ago, Ahmed and her colleagues began searching for solutions to the problems they suspected were coming.

They considered investing in another local water station, al-Himma, which hadn’t been used for 10 years but could be adapted to purify water from the nearby Khabour river. But the low rainfall dried up the once-plentiful Khabour, leaving the region dependent, again, on Alouk.

The Turkish government, which did not respond to multiple requests for comment has insisted in public comments that the disruptions at Alouk are not aimed at the Kurdish administration. Instead, it places the blame squarely back on the Kurds, which it says have not provided enough electricity to keep Alouk going.

In a July statement, a spokesperson for Turkey’s Ministry of Foreign Affairs said, “The terrorist organisation PKK/PYD and the regime deliberately obstruct the electricity to the station and the region. These power cuts disable the functions of the station to provide water and aggravate the humanitarian conditions in the region.”

Ahmed agrees there are issues with the electricity supply in the region. But she says this is Turkey’s doing too: “Besides blocking Alouk, Turkey is also blocking the Euphrates River.”

A six-hour drive southwest from Hassakeh, in the office of Taqa Dam director Welat Darwish, a picture of a woman in traditional Kurdish costume hangs on the wall, next to a photo of a Kurdish fighter overlooking the wreckage of Kobane, which was destroyed in fighting with the so-called Islamic State after a long siege, and has become a symbol for Syrian-Kurds.

Darwish, who sits below the pictures, is a veteran of the fight against IS (Islamic States). In 2017, US-backed Kurdish forces forced IS out of the dam on the Euphrates River just a few months before the extremists were ousted from Raqqa, the capital of their self-proclaimed caliphate.

“Four years ago, they were hanging people in here,” he says of Tabqa, smiling proudly about the victory.

Now, he faces a new and very different fight. “When we took over, the level of the water was so high that the sluices barely contained it,” Darwish says of the dam. Today, out of his window, only small trickles of water are running down the dam, and on the other side of his office sits its reservoir, which he says has dropped six metres since January 2021.

According to the UN, the flow of Euphrates into Syria has dropped from 500 cubic metres per second (the amount guaranteed in a decades-old deal between then-Syrian president Hafez al-Assad and Ankara) to 214 metres per second in June. Levels are also lower downstream, in Iraq.

Since the Euphrates runs from Turkey, officials like Ahmed and Darwish say the country is purposely reducing the stream into Turkey because of its opposition to the Kurdish administration. But Ankara, which did not respond to requests for comment on questions about the river, has reportedly denied it is doing so.

The reduction of inflow from the Euphrates has also caused a serious decrease in the electricity generated by three Syrian power plants on the river: Tishreen, Mansoura, and Tabqa. An estimated three million people rely on electricity supplied by Tabqa but, according to Darwish’s data, the electricity generated by the three dams together has dropped by about two thirds since the beginning of 2021. That means most communities that rely on the power plant, including parts of Syria that stretch outside the northeast, only receive around five to six hours of electricity a day.

It also means, according to Darwish and Ahmed, that there isn’t enough electricity to send back to Alouk.

The cycle and blame game in Syria’s northeast has dangerous consequences for civilians, who can’t afford clean water or to pay rising food prices. It can also be seen in new health problems cropping up across the region.

Sara Omar Dawoud has worked as a nurse in Hassakeh for the past 20 years: when it was controlled by al-Assad’s government, and when it was a centre of fighting against Islamic States (IS). Still, she says, “the situation has never been as bad as this year. Now, we have no means to defend ourselves [against the water shortages].”

By eight in the morning at Hassakeh National Hospital, she has already spoken to dozens of mothers waiting for doctors to see their children. They all report the same symptoms: diarrhoea, vomiting and fever. They are all likely caused by unsanitary water from local wells, since clean water is not coming from Alouk.

“The children, the elderly, and the people with less economic means are the victims of this conflict,” she says, referring to the tug of war over Alouk and the Euphrates.

In the last few months, Dawoud has also seen another worrying trend. Children, she says, are increasingly showing signs of lung problems, which she believes are a result of diesel-powered generators that are used more often due to the lack of central electricity.

“We don’t have enough medication to treat all our patients,” Dawoud says, and many of them can’t afford to buy it. She sometimes steps in to help. “Often, I have no choice: Either I risk the children dying, or I buy the medication with my own salary.”

For Meslet, whose own family dealt with skin problems from unclean water, he doesn’t know or necessarily care who or what is to blame for the water shortages, and for the drastic change in his life and livelihood. Whether it is the climate crisis or the conflict between Turkey and the Kurdish administration, the farmer is more concerned about the victims: “We are Arabs, Yazidis, Kurds, Christians, and Muslims,” he says. “The people affected by this water war are the civilians, especially the most vulnerable and poor people.

Desmond Tutu wanted to be remembered only as one who ‘loved, laughed, cried, was forgiven and forgave’