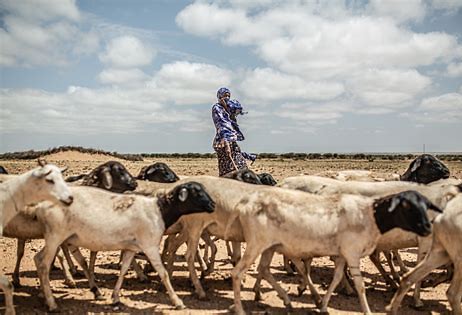 Time is fast running out, the UN agency warned, with Somalia facing “the very real risk of famine” in the coming six months.

Meanwhile, an estimated 7.2 million Ethiopians are already not getting enough to eat, and half a million Kenyans are just a step away from catastrophic levels of hunger and malnutrition.

“We know from past experience that acting early to avert a humanitarian catastroysphe is vital, yet our ability to launch the response has been limited due to a lack of funding to date,” says Michael Dunford, WFP’s Regional Director for Eastern Africa.

The Horn of Africa endured drought in 2016-2017, but humanitarian assistance was scaled up early, thus saving lives and averting a devastating famine.

Since last year, WFP and its humanitarian partners have been warning that the current drought could be disastrous if the international community did not act immediately.

Three consecutive seasons of below-average rains have led to a continued deterioration in food security, according to the UN Food and Agriculture Organization (FAO).

The impact has been felt in those households that raise crops or animals, said Dr Chimimba David Phiri, FAO Subregional Coordinator for Eastern Africa, who is based in Ethiopia’s capital, Addis Ababa.

Some three million livestock have died across southern Ethiopia and arid and semi-arid regions of Kenya, he reported, while in Somalia, up to 30 per cent of households’ herds have died since mid-2021.

“Furthermore, beyond the drought, many of the areas that we are concerned about have been plagued with conflict and insecurity, as well as macroeconomic challenges and rising food prices and recently also by Desert Locust,” said Dr Phiri, speaking to journalists in Geneva.

The situation in the Horn of Africa has also been compounded by the fallout from the war in Ukraine, as the cost of food and fuel continues to soar.

WFP said that drought-affected countries are likely to be the hardest hit. The cost of a food basket has already risen, particularly in Ethiopia and Somalia, which depend heavily on wheat imports coming from countries in the Black Sea region.

Dr Phiri added that FAO is also concerned about low supply of fertilisers from the Black Sea region during the second half of the year.

Both UN agencies are seeking a scale-up in support for their operations.  They fear that due to a lack of funding, it will be difficult to confront the looming humanitarian catastrophe.

“We must act now on a no-regret basis if we want to prevent a humanitarian catastrophe, and we must significantly scale up our investments on resilient food systems,” said Mr. Phiri.

WFP last appealed for desperately needed funding in February but received less than four per cent of what was needed. Some $473 million is required over the next six months.