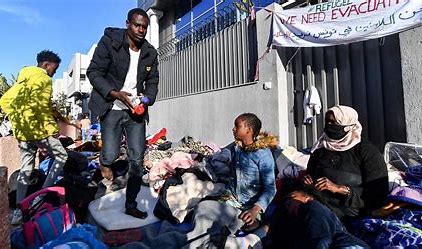 Dozens of refugees and migrants in Tunisia are demanding evacuation to other countries. The refugees, who are mostly survivors of illegal immigration attempts by sea to Europe, have been staging a sit-in in front of the office of the United Nations High Commissioner for Refugees (UNHCR) in the Tunisian capital, Tunis, for almost a week now.

“We need to be evacuated,” reads a banner they have hung at the entrance to the building.

Equipped with blankets, the refugees, many of whom are women and children, spend the night on cardboard boxes spread out on the ground amid suitcases containing their personal belongings.

“The real problem is, the UN commission has abandoned its main role, which is our protection. Instead of doing that, it has left us on the street. We were living in Zarzis, and the UN commission demanded our evacuation from there, cut off all funds and stopped protecting us.” Saleh Saeed, a Sudanese from Darfur who refused refugee status says.

Nineteen-year-old Mohamed Nour from Chad also claimed there have been instances of racism against them which makes life difficult. We have been attacked in our homes. We just want to be evacuated from this country.”

Migrants and refugees in Tunisia, particularly from sub-Saharan Africa, regularly complain of being subjected to verbal and physical abuse in Tunisia.

The majority of these migrants were rescued off the coast of Tunisia after their boats capsized while they were trying to reach the European continent clandestinely.

According to statistics from the Tunisian Forum for Economic and Social Rights, the Tunisian coastguard has intercepted 25,657 migrants attempting to cross the Mediterranean since 2021, almost double the number from the previous year.

US accuses Russia of recruiting ex-Ethiopian soldiers to fight in Ukraine, embassy in Addis Ababa denies