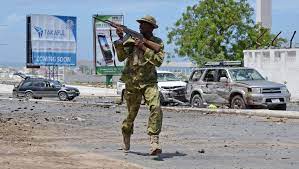 Terrorist group al-Shaabab has claimed responsibility for a mortar fire attack on Somalia’s parliament on Monday that injured at least six people during a joint session.

Explosions were heard in the middle of a parliamentary session. Several people were injured, but no elected officials were hit by the shrapnel that landed in the fortified airport compound near parliament in the capital Mogadishu, officials and eyewitness reported.

“We don’t have details yet but these explosions were caused by mortar fire, the lawmakers were inside the building when the incident happened. They are safe,” a security official said on condition of anonymity.

“I was in the area when the mortar shells landed outside the building where the parliamentarians were gathered, several people were slightly injured in one of the explosions,” said a witness, Abdukadir Ali.

Parliamentarians were due to set dates for votes to appoint the presidents of the two legislative chambers, the next step in a long-delayed process to elect a new president to lead the country.

The upper house will vote on 26 April and the lower house the following day to appoint their respective leaders, officials said.

The new members of the Senate and People’s Assembly were sworn in on Thursday last week after being postponed for over a year.

Only 290 out of 329 seats were filled, but lawmakers pledged to move ahead with the electoral process that has been marred by a power struggle between the sitting president and prime minister.

The al-Qaeda affiliated al Shaabab, who have been waging an insurgency against the Somali state for more than a decade, claimed responsibility for the attack in a brief statement.

On March 24 this year, an attack on Mogadishu Airport, the most secure place in the country, killed three people and in the centre of the country, 48 people died in a double attack.

The UN mission in Somalia (UNSOM) condemned the mortar attack, saying it “stands firmly with the Somalis in their efforts to complete the electoral process and make progress on national priorities.”