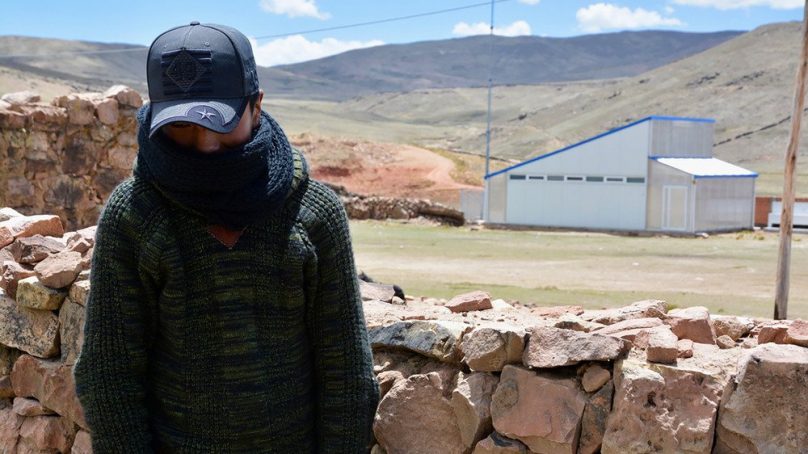 A dirt road is the only way to reach the remote Peruvian village of Tarucani, located high in the vast arid plains of the Andes, where pink flamingos paddle shallow brooks along the Bolivian border and herds of alpacas forage the dry and sparse vegetation for the few edible morsels.

The village has little connection to the outside world: The nearest market town is an hour away by four-wheel drive, and the only means of transportation is a pair of motorbikes, apparently shared by the roughly 200 Indigenous Aymara people who live here.

Even before the pandemic, government nurses only came to Tarucani once every two weeks, so when The New Humanitarian visited in October 2021 it was no surprise to discover that the vaccination campaign had not yet begun.

However, it was a side-effect of the pandemic, not the dangers of the virus itself, that most concerned the village’s residents: None of María Luisa Espejo Vargas’s six children – aged 4 to 18 – have had any consistent schooling for almost two years.

Espejo Vargas, 38, has done her best to improvise. She scraped together enough money to buy a cell phone so her eldest son could follow his courses online – even though the village rarely has electricity and the signal is sporadic at best.

But when the phone broke, she couldn’t afford a new one. Her son had to wait for over a year with no lessons at all before a new teacher was deployed to the village to resume limited in-person classes – a compromise negotiated by regional governments to try to stop students in rural areas from falling too far behind.

By the time classes resumed – only two days a week and combining children of all age groups – most students had forgotten what they had previously learned.

Most residents of Tarucani are illiterate. The village has long been denied basic services – from education and health programmes to electricity and phone connections. Its small school – previously run by a resident teacher who left early in the pandemic – only opened in 2005.

“I am very sad,” Espejo Vargas said. “I don’t want them to end up like me,” she said, tears streaming down her cheeks. “I want them to study and have a profession. I want them to be more than alpaca herders.”

From a brief look at UNESCO’s map showing the total duration of school closures due to the pandemic, the current education crisis would seem to be a fairly evenly spread global phenomenon, but this would be to ignore the disparities that lie beneath the surface.

In the developed world, virtual online lessons quickly replaced in-person classes, whereas many schools and children in the Global South lacked the computers, broadband connections or simply the means to make these possible.

As students return to school slickly in wealthy countries after the holidays, tens of millions of children in poorer regions are still facing partial school closures or disruption due to the lingering effects of the pandemic.

“While the impacts of the pandemic [on education] have been universal, they have not been uniform,” explained Save the Children’s Head of Education Policy James Cox, adding that children in marginalised areas – like the poverty-stricken villages of the Andes – have been hit the hardest. “It is a real crisis of equity,” he said.

The scale of the education losses – especially when you take into account their knock-on effects in existing crisis settings – have far-reaching consequences, not only for the children themselves but also for the humanitarian organisations working in those communities.

“I am in a state of panic,” Robert Jenkins, director of education at UNICEF, told The New Humanitarian. “We need to go into crisis footing to respond to this.”

Since the onset of the pandemic, so-called “learning poverty” – the inability of a 10-year-old child to read a basic text – has increased from 50 to 70 per cent in low- and middle-income countries.

The disruptive impacts of prolonged school closures mean the setback to children’s learning is longer than simply the time they are out of class – estimates reach as high as an average of 2.8 years of education lost for every year of school closure in sub-Saharan Africa. Cox estimated that some children could lose 20 per cent – or more – of their education.

The UN recently warned that impacted children could lose a combined total of $17 trillion in their lifetime earnings – a sharp rise from the 2020 estimate of a $10 trillion loss.

But the school closures have already been impacting children in more tangible ways, too: At the peak of the pandemic, an estimated 370 million children were unable to access school meals, often a steady source of nutrition, worsening food insecurity and malnutrition.

Girls often lost out to boys when it came to accessing technology needed to keep up; a MIET Africa study looking at five different countries across sub-Saharan Africa showed that 23 per cent of male teenagers were able to continue their studies through the pandemic without disruptions, compared to only 12 per cent of female teenagers.

“Yes, water is important, food is important, tents are important… But if you really want to invest, and want to be honest about local empowerment, you need to invest in human beings.”

Worse still, some children will stay out of school permanently. In Uganda – where classes only restarted last week after reportedly the world’s longest school shutdown – the National Planning Authority estimates that 30 per cent of students will not return, due to a combination of teen pregnancies, early marriages, and child labour. In some parts of the world, the choices are even starker.

Millions of children caught in armed violence, poverty and hunger in countries like Burkina Faso, Mali, and Niger are forced to pick between education and survival. And since the Taliban takeover, education – particularly for girls – has become increasingly politicised in Afghanistan, where aid groups are struggling to resume assistance amid a complex economic and humanitarian crisis.

“Humanitarian thinking has to shift,” said Yasmine Sherif, director of Education Cannot Wait, an organisation that combines government, humanitarian and development funds to address education needs in crisis situations. “Yes, water is important, food is important, tents are important,” she said. “But if you really want to invest, and want to be honest about local empowerment, you need to invest in human beings.”