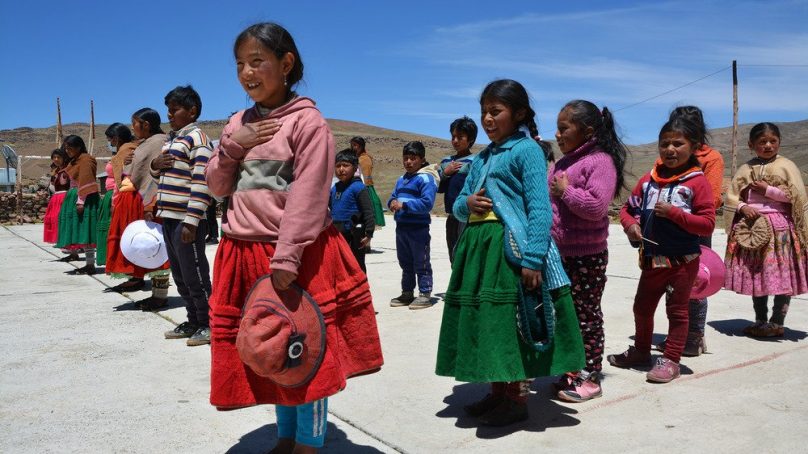 According to Education Cannot Wait, only 2.6 per cent of global humanitarian funding was earmarked for education in 2019, a number Yasmine Sherif estimates should be at least 10 per cent to ensure access to safe, free, and quality education.

Sherif is director of Education Cannot Wait, an organisation that combines government, humanitarian and development funds to address education needs in crisis situations.

In 2020, the proportion remained roughly the same as at pre-pandemic levels. To put this in context, programmes to improve food security received 22 per cent of humanitarian spending the same year.

“How do you best invest in human beings? You allow them to be educated,” Sherif said. “Humanitarians think about emergencies, but it is not about quick fixes only.”

Peru has easily the highest Covid-19 death rate per capita in the world, and the country has been hit hard economically by the pandemic too.

The Peruvian government began reopening bars, gyms and casinos at the end of 2020, but it took another year for the Ministry of Education to announce its plans to resume daily in-person classes, making Peru one of the slowest countries globally to do so.

The loss of learning has had a disastrous impact on children in rural, impoverished communities like Taracuni, where many see this as part of an ongoing cycle of being abandoned by a government whose officials rarely – if ever – visit.

“Politicians have forgotten us,” said Horacio Quispe Chambi, the teacher who drives six hours from his home in the regional capital, Puno, to Tarucani to teach the twice-a-week classes in Taracuni. “They just think about themselves and not about the reality of people living in the countryside.”

One of the realities Quispe Chambi has observed is an uptick in child labour, which increased globally for the first time in two decades during 2020, when many children from poor families had to help out parents who had lost their jobs due to the pandemic.

Frank Christian Mamani Ramírez went to work in an illegal gold mine in Bolivia in order to buy a cell phone to study remotely. The village’s teacher said that with so many students having to work, it was difficult to make progress in teaching.

“I needed to get a cell phone [to study remotely],” said Frank Christian Mamani Ramírez, a 14-year-old from Tarucani, explaining why he went to Bolivia to work in an illegal gold mine when school was suspended. There, he earned a monthly salary of 350 Peruvian soles (roughly $90) – poverty wages.

“Four other Peruvian boys were at the mine, and they stayed longer,” he said. While Mamani Ramírez hopes to attend university someday, he said he would voluntarily return to the mining work if he needed more money.

Many of Quispe Chambi’s students have also gone to Bolivia’s legislative capital, La Paz, in search of work, or to San Juan del Oro and Puerto Maldonado in the Peruvian Amazon, known for their illicit coca production and illegal gold mining.

“We feel the absence of our students,” Quispe Chambi said. “Because of the situation due to the pandemic, we cannot develop the curricula that our students need to learn.”

Although there is a growing awareness of the crisis, humanitarians are concerned that two thirds of developing countries have cut their education budgets amidst pandemic-induced downturns.

“There is a great political reiteration of the importance of education,” Save the Children’s Cox said, cautioning that government budgets have shrunk due to Covid-related recessions, meaning that education funding has fallen across the board.

Some Western donors who were once education champions are not funding as many initiatives as in the past: Britain recently announced cuts in funding for girls’ education in developing countries, while Norway’s new government subsequently halved a pledge that could affect some 2.4 million children.

“The critical point now is that we formulate strategies and do not sacrifice education.”

“We are fearful that short-term budgetary challenges will compromise the medium- and long-term potential of each child to realise their dreams,” UNICEF’s Jenkins said.

Nevertheless, 11 African leaders committed to spend 20 per cent of their budgets on education during a recent summit co-hosted by Britain and Kenya to raise funds for the Global Partnership for Education (GPE), a move Cox sees as a positive step in the right direction.

“The critical point now is that we formulate strategies and do not sacrifice education,” he stressed. Humanitarians are urging a holistic, tailored approach as governments and aid groups attempt to mitigate both the short-term and long-term impacts of education losses around the globe.

“Differentiate and accelerate: this is needed more than ever,” said Jenkins, arguing that it is critical that children are individually assessed according to their abilities, and that students, parents and teachers are all offered the support they need.

While many propose technology – both access to it and training on how to use it – as part of the solution, there is also a recognition that it is no panacea and that it needs to be accompanied by more comprehensive learning recovery plans.

A joint December report by UNICEF, UNESCO and the World Bank recommended that it was essential that schools reopen as quickly as possible and remain open. Once this happens, curricula should be consolidated to prioritise essential learning even if it means combining classes – particularly in earlier years – to ensure pupils grasp foundational maths and literacy.

Teaching time may be extended, especially in summer months, while teachers should be trained to target needs more efficiently, “aligning instruction to students’ learning level”.

“If education has no connectivity aspect and [children] don’t know how to use the internet, they are just not going to be there, even if we are reaching them with some quality of education,” Gary Stahl, UNICEF’s director of private sector fundraising and partnerships, said.

Stahl was speaking from a sustainable finance summit in Geneva, where he was promoting Giga, an initiative launched with the International Telecommunication Union (ITU) to connect schools to the internet in light of the Covid-19 pandemic.

Children in Tarucani singing the national anthem to visiting officials in October. Classes have restarted, but only twice a week with all years in together. However, in Tarucani and other remote conflict or poverty-stricken settings, laptops and iPads aren’t always the most effective solution.

“If I go to the mountains in Afghanistan, [technology] is not the solution,” said Sherif, explaining that – as is the case in the Andes – the lack of electricity and internet access would present a challenge. However, she pointed out that investing in cell phones could go a long way in refugee camps, where large families often share a single smartphone.

“Even from an educational perspective, it is critical that children are well-nourished, feel safe and have a sense of protection,” Jenkins said, mentioning that UNICEF is working in partnership with the World Food Programme (WFP) to try to address these needs.

Residents are still waiting to see whether the Peruvian government will keep its promise of resuming full-time in-person education for children in rural areas at the end of March. Many are nervous.

A small rented building that was being used as the makeshift school might be taken back by its owner. And with Omicron cases mounting, compliance with social-distancing protocols may present yet another hurdle.