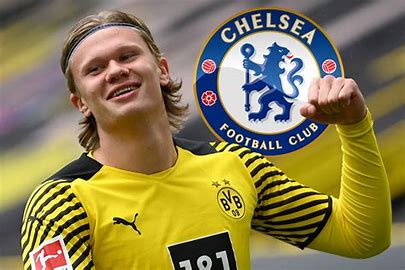 As the dust settles on Euro 2020, European Champions League winners, Chelsea FC, are switching attention to reinforcement of their squad ahead of the start of the 2021-22 season in August.

A sizeable number of Chelsea stars were involved for their national teams in the Euro 2020 and may not be available at the start of the season, having been allowed time off to recharge.

Latest reports from London say the Blues’ manager Thomas Tuchel’s Chelsea is expected to have a busy window, with Borussia Dortmund forward Erling Haaland already in London for what observers say is the start of his switch to Stamford Bridge.

Haaland is high up the list of Chelsea, with three players already said to have been moved to accommodate the gifted striker.

According to reports, Fikayo Tomori has departed to join AC Milan, with Olivier Giroud and Tiemoue Bakayoko also said to be heading the San Siro in Italy.

After missing the friendly match against FC Giessen on Tuesday night, Haaland returned to training on Wednesday but little was said about his reported trip to land.

Dortmund, however, are set to lose winger Jadon Sancho to Manchester United and are reluctant to part ways with another star despite Blues owner Roman Abramovich reportedly setting aside £150m to sign him.

As he reportedly prepared to travel to London last week Haaland – now quarantined – left the door open for a potential blockbuster transfer by refusing to rule out a Borussia Dortmund exit.

The Norwegian is the most sought-after player in world football after a stunning 18 months in the Bundesliga. Haaland has plundered 57 goals in 59 games, ascending to one of Europe’s best strikers in the process.

Dortmund have been steadfast in their insistence Haaland will remain at Signal Iduna Park, despite interest from the Premier League.

Manchester United, Manchester City and Chelsea have all been linked with the 20-year-old, as they search for long-term options in the striker position. But Pep Guardiola has hinted City may not be able to afford the kind of fee that Haaland would command, while United look as if their focus is elsewhere.

That leaves Chelsea, with Thomas Tuchel making it clear that he needs to add goals to his side, despite winning the Champions League last season. Timo Werner struggled in front of goal during his first season, while Tammy Abraham and Olivier Giroud have both been heavily linked with an exit.

“We need more goals and we rely on anybody and we want to trust anybody who is capable of scoring,” Tuchel said early this year. “But you just need to read the numbers, our top scorers have six goals. This is clearly not enough for the demands; the expectations and the targets Chelsea football club has and what we demand. I say this without any anger and without being rude to any of the offensive guys, I think they’re very well aware of it.”

Dortmund sporting director Sebastian Kehl was recently quizzed about the potential of Haaland going to Stamford Bridge, reaffirming their belief he will remain with the team next season.

“Haaland to Chelsea? I read about it, but for us nothing has changed: we have plans with Erling for next season. He and his agent are aware of it. We expect him back this week,” Kehl said.

Reports have suggested that Chelsea are one of the teams Haaland could imagine himself at and remained coy when asked about the possibility of him leaving Dortmund.

Dortmund kickstarted their preparations for the new season with a friendly against FC Giessen on Tuesday night and Haaland was conspicuously missing in action, but Kehl confirmed there was no update on his future.

“There is nothing new on this matter. He is in our plans. Erling will return this week and he will be very hungry. He wants to play football, he feels comfortable with us and he will be eager to score many goals.”