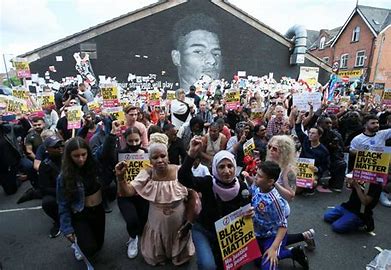 Marcus Rashford said he is “lost for words” after hundreds gathered for an anti-racism demonstration and took the knee outside his mural on Tuesday evening. The artwork in south Manchester was vandalised within hours of England’s crushing defeat against Italy in the Euros final on Sunday night.

But it has quickly become a symbol of love and solidarity after well-wishers covered it in paper hearts, England flags, flowers and poems.

Many left touching messages of support for the football star and teammates Bukayo Saka and Jordan Sancho, after they were subjected to an onslaught of vile racist abuse online after the trio missed penalties in the final moments of the game.

Street artist Akse P19 added the finishing touches to restore the black and white mural, which stands on the side of a cafe in Rashford’s home town Withington.

Hundreds travelled from across Manchester – and as far as Birmingham – to show their solidarity and took the knee in a powerful moment in front of the artwork.

Many held placards displaying anti-racism messages and chanted “Black Lives Matter” in unison, while others continued to add personal messages to the wall.

One demonstrator, echoing Rashford’s own words following the racist abuse he received, told the crowd: “We will never apologise for being Black.”

Among the crowd were Rashford’s aunties and godmother, Carol Wright, Norma Morgan and Fay Banton, who said they were incredibly “proud”’ of the Manchester United striker and furious at the racist abuse he and teammates received.

Ms Banton described the scene at the rally as “gorgeous,” telling The Guardian: “He [Rashford] would love it. At this point in time, he’s so low.”

The striker tweeted a series of images from the rally, saying he was “overwhelmed. Thankful. Lost for words”, and signed it off with a heart and an England flag.

Nahella Ashraf, of Manchester Stand Up to Racism, which organised the demonstration, condemned British Prime Minister Boris Johnson and his minister Priti Patel for staying silent as fans booed the England squad when they took the knee at Wembley.

She told the crowd, “Three Black footballers have been viciously racially attacked on social media, but let’s be very honest, are we surprised? When the football team began taking the knee in solidarity, and against racism, they were booed, and what did Boris Johnson say? Not much. What did Priti Patel say?”

Many have hit out at the prime minister and the home secretary for their responses to the vile racist attacks inflicted on the players and their wider inaction to tackle racism in the UK.

Tyrone Mings accused Ms Patel of hypocrisy and “stoking the fire” when players took the knee, while Gary Neville accused Mr Johnson of fuelling racism, referencing a 2018 article in which the PM compared Muslim women wearing a niqab to “letterboxes.”

After the crowd took the knee this evening, protester Lamin Touray told the rally, “We know the powers that be want this to go away, and the attack on Sancho and Rashford and Saka has ignited the anti-racist movement in this country and in this beautifully diverse city.”

“Those players have shown us everything that is good about this country, Black and white united against racism, taking a strong stance,” he added.

Rashford said in a statement on social media last night that he was ‘on the verge of tears’ after seeing the outpouring of love and support in Manchester.

He wrote, “The messages I have received today have been positively overwhelming and seeing the response in Withington had me on the verge of tears. The communities that always wrapped their arms around me continue to hold me up. I’m Marcus Rashford, 23 years old, black man from Withington and Wythenshawe, South Manchester.”

Ed Wellard, founder of Withington Walls, the community street art project behind the mural, said it was “really heartening” to see the “outpouring of love and solidarity.”

Mr Wellard, who quickly covered the mural with bin bags on Monday before people could see, said he “teared-up” after seeing the “repugnant” abuse daubed across the artwork.

He added, “I was upset about the result anyway and the scenes we had seen at Wembley and stuff – it felt like a dark day for English football. And then to come out and see what had been written – it was repugnant, it was horrible. I wanted it covered before the kids went to school. No one should be seeing that.”

Mr Wellard said the way politicians criticised the squad for taking the knee was “unacceptable” and that they need to “raise their game” on stamping out racism. “We’ve got politicians that are trying to divide us, we need to come together,” he added.

Ritu Kumar, who lives in London but was home in Withington this week, attended the vigil with her two-year-old son and took the knee alongside her mother and father.

“It was incredibly emotional and powerful,” the 34-year-old said. “Marcus Rashford made sure that kids across the country didn’t go hungry, and for him to get the kind of abuse he got was just unacceptable. There is no place for racism in this world, whether it be Rashford, Saka, Sancho, my neighbour or your friend.”

A spontaneous online crowd-funder for the mural has now raised more than £30,000, as police investigate the vandalisation. The mural, based on a photograph by Daniel Cheetham, was created last November in recognition of Rashford’s campaigning work to tackle child food poverty.

His mother provided the quote on the mural, which reads, “Take pride in knowing that your struggle will play the biggest role in your purpose.”

Elsewhere, a petition calling to ‘ban racists for life from all football matches in England’ has almost reached 1 million signatures.

If viruses play a bigger factor in asthma attacks, it’s likely doctors may have been fixing wrong problems