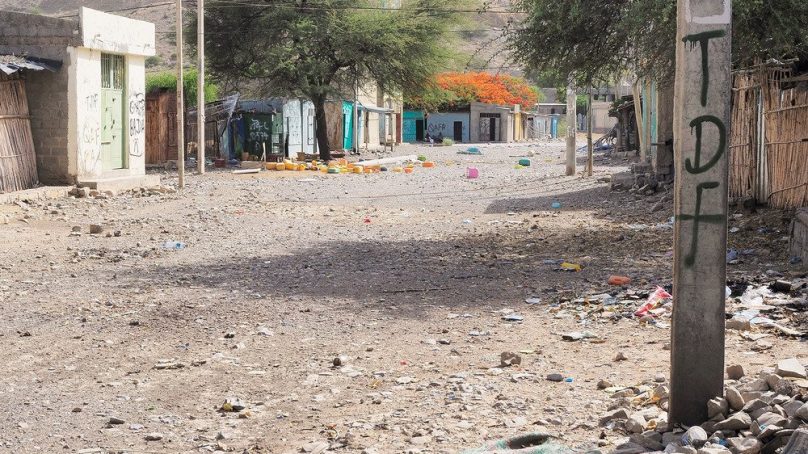 here’s almost no one left in Abala, a once-bustling town on the border of Ethiopia’s northern Tigray and Afar regions. Its streets are empty, given over to stray dogs and troops of baboons that scavenge undisturbed among the abandoned houses.

Last week, we became the first international media outlet to visit Abala since rebels from the Tigray People’s Liberation Front (TPLF) withdrew from the town and other territories in the Afar region in late April.

Since March, a fragile ceasefire has been in place between the federal government and its war allies, who for 19 months have been battling the TPLF.

The TPLF entered Afar in late December, taking control of several districts, including Abala, in what they described as an attempt to secure an aid corridor to Tigray, where 5.2 million people need humanitarian assistance, including 450,000 malnourished children.

Nearly all the homes and shops in Abala, which had a pre-war population of several thousand, have been gutted by looting, their doors hanging open and the walls daubed with both pro-Afar and pro-TPLF graffiti. One house bore the words “Tigray has won” while the word “Afar” was scrawled on several others in white letters.

On the streets are broken bits of furniture, heaps of old clothes, and scorch marks from fires. The hospital had been trashed, its floors thick with discarded medical records, packets of medicine, and other rubbish. In one of the wards, the word “gunpowder” had been written in several places in Tigrinya, the main language of Tigray. The scene was similar at the police station.

There are competing claims as to what happened in Abala when the TPLF took over. Some Tigrayan activists and media reports have claimed that Tigrayan residents were massacred by local Afar security forces and militia, whereas the Afar claim the TPLF was responsible for the destruction. The town has a mixed population.

The New Humanitarian spoke to over 20 current and displaced residents of Abala. None said a massacre had taken place, although two Tigrayan residents said that several Tigrayans were murdered in the town for resisting the looting of their properties by local Afar before the TPLF took control.

Several residents – both Afar and Tigrayan – described how Afar militia, police and security forces gathered the town’s Tigrayan population at various sites within the town as the TPLF approached, and as the sound of fighting rang out from the surrounding mountains.

The Tigrayans were then transported to a detention centre in Semera, Afar’s capital, according to two Abala residents and a UN official and a lawyer, who said the site is guarded by regional Afar soldiers. Some 9,500 Tigrayans from Abala are currently being held there.

“The militia said, ‘We are taking you to the police station for your own safety, to save you from death’,” one Tigrayan from Abala said during a telephone interview from the detention centre in Semera. “After that, they told us to get onto lorries. ‘This is an order,’ they said. We never realised we were coming to Semera. We were taken forcefully.”

He added that one person was killed for refusing to board the trucks, and that “around 50 youths” jumped from the vehicles on the way to Semera, resulting in one death. He believes they then fled to Tigray.

The detained Tigrayan described how local Afar – armed with guns – had looted the property of Tigrayan residents over the course of several days, starting on December 19 as the fighting around the town intensified.

“I saw the looters, they were Afar, we know them,” he said. “They came from the rural areas and the town. They just collected the property in the street and carried it away in the cars.”

He added that he saw the bodies of three of his Tigrayan neighbours lying in the street. “They had bullets in their heads,” he said. “I don’t know which person killed them [specifically], but it was the Afar militia. After we arrived at the police station, my friends told me they saw more than 10 bodies in the road. Another was killed by a mortar or heavy machine gun.”

The looting accounts were echoed by a second Tigrayan from Abala who was being held at the same detention site in Semera. “Every shop and all the houses were looted,” he said. “Everyone was carrying a gun to loot. We were left with only the clothes on our backs.”

The two Tigrayan residents from Abala described bleak conditions at the detention site in Semera, where temperatures regularly soar past 40 degrees Celsius. Aid agencies have delivered food, but one of the men said there was no medication available except paracetamol.

Both said around 70 people had died in the detention centre, and that it is only possible to leave by paying hefty bribes to the Afar soldiers guarding them.

Most of the ethnic Afar residents of Abala interviewed said Tigrayan rebel forces shelled the town before they entered it, killing several people. It is not clear how many people were killed by shelling or in shootings that occurred inside the town while the battle was taking place.

The Afar also said TPLF forces carried out their own campaign of looting and vandalism after they captured the town, gutting homes, stealing vehicles and trashing government buildings.

Imam Yousef, an Afar resident, was one of a handful of people who stayed in Abala throughout the fighting and the subsequent rebel occupation. He sought shelter in the countryside during the battle for the town, before returning a few days later.

“When we came back, the TPLF were looting,” he said, sitting on a broken pavement amid the ruins of the town. “Nothing remains, including food and household equipment. I am a farmer, and they took the grain I stored in my home. They looted all of this.”