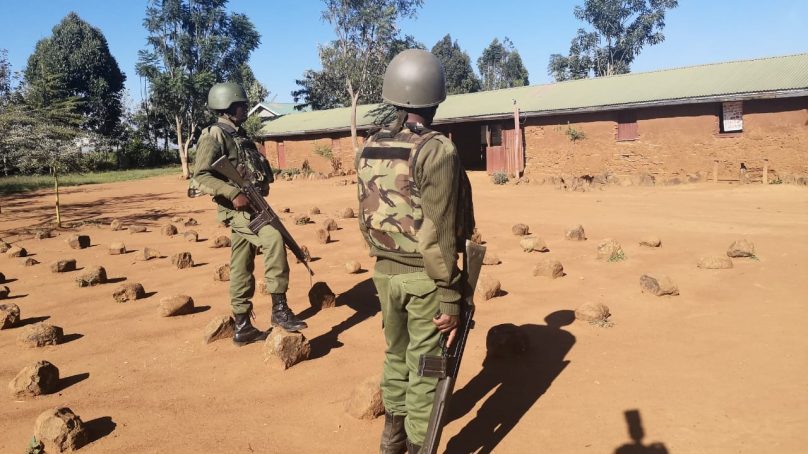 Guns and grenades will not undo damage wrought by climate crisis in conflict-prone north, Kenya told

Clashes in Kenya’s Laikipia County between pastoralist and farming communities continue to destabilise the central part of the country, with criminals taking advantage of the localised conflicts for their own gain.

Over the past two month, bandits have killed seven people. On October 10 heavily armed bandits killed three civilians and on October 28, four police officers were gunned down at Kenya Mpya shopping centre in Ol Moran by marauding cattle rustlers. This was in addition to September incidents in which three police officers died at the hands of bandits while enforcing security in Laikipia.

This is despite the presence of a heavily armed security team tasked with restoring peace and arresting criminals.

The ongoing conflict has cost lives, destroyed property and displaced hundreds of people. The main dispute is over access to and use of pastures in Laikipia, made even scarcer by years environmental destruction and resulting climatic change.

The land has been contested since the colonial government pushed out the Maasai at the turn of the 20th century, converting thousands of hectares of communal grazing into private ranches. This forced local herders onto seasonal grazing lands.

Drought caused by climate change compounds the problem, as does political incitement ahead of the 2022 elections. Politicians in Kenya have, since independence, used traditional grievances to achieve political advantage. In Laikipia, land is an emotive political card and is at the heart of the clashes.

Conflicts are fuelled by drought caused by climate change, and political incitement ahead of the elections.

The Anglo-Maasai agreements of 1904 and 1911 were cases of historical injustice that dispossessed the Maasai of their land in Laikipia. The 1904 treaty declared that the community had voluntarily moved away and land was willingly given to the European settlers. This forced the Laikipia Maasai to move south into harsh semi-arid terrain. Two reserves were created in Kajiado and Laikipia counties (see map) to settle the Maasai population.

As the number of white settlers increased, a section of the Maasai community was duped into expanding the agreement in 1911. The settlers wanted to take over the ‘unsettled’ areas and this, along with many other actions by the colonial government, rendered the Samburu (Laikipia Maasai) and other pastoralist communities homeless.

A court case challenging the legality of the 1911 agreement was dismissed in 1913. And a plea at Kenya’s constitutional conference in London in 1962 did not bear fruit either. Instead of righting these wrongs, the independence government perpetuated them by taking over the land previously owned by settlers and excluding the locals.

Climate change has further complicated the relations between farmers and herders. In the recent incident, which was driven by drought and a lack of grazing, the pastoralist communities forcefully invaded farms, private ranches and community conservancies to save their dying herds.

Laikipia county borders semi-arid Isiolo, Samburu and Baringo counties, which are all inhabited by pastoralists. The latest drought has ravaged these areas, forcing the herders to search for water and greener pastures in Laikipia. This leads to bloody clashes which recur every dry season. Instead of trying to resolve the sporadic conflicts, politicians incite communities and allegedly supply weapons and ammunition to their relatives living in these areas.

While drought and political incitement are the primary conflict triggers, criminals take advantage of the situation to attack small-scale farmers in Laikipia and steal their livestock. These thieves are said to come from as far as Baringo County.

Rift Valley Regional Commissioner George Natembeya acknowledged that the clashes had links to the land ownership row. But Mr Natembeya added that the bandits who had been terrorising residents were armed with powerful M16 rifles usually used by foreign soldiers, alluding to the United Kingdom’s training base in Laikipia.

This claim was refuted by Jane Marriott, the British High Commissioner to Kenya. Natembeya later attributed the inflow of illicit arms to the turmoil in South Sudan and Northern Uganda.

Laikipia County Commissioner Daniel Nyameti said the clashes were a spill over from security force operations in Kapedo, in neighbouring Baringo County, that displaced criminals to Laikipia. He said the bandits claimed that the land in Laikipia’s Ol Moran area, the epicentre of the conflict, belonged to their ancestors.

The government can no longer avoid addressing historical land injustices and political incitement.

The government has since secured the vast Laikipia region by declaring a dusk-to-dawn curfew in affected areas under the watch of the military and police. Movement restrictions and the curfew have disrupted people’s day-to-day lives, and herders have been forced to leave the private farms and community conservancies they occupied.

These immediate security measures are necessary to stop the attacks but won’t bring lasting peace. Intelligence gathering will help avert clashes and apprehend criminals. The influx of illegal firearms in the counties of Laikipia, Samburu, Turkana, Marsabit, Isiolo and Baringo also needs to be stemmed.

More important though, is that the government can no longer avoid the difficult but essential task of addressing historical land injustices, poverty and political incitement in Laikipia. Both the county and national governments also need to develop a long-term plan to protect pastoralism as a way of life.