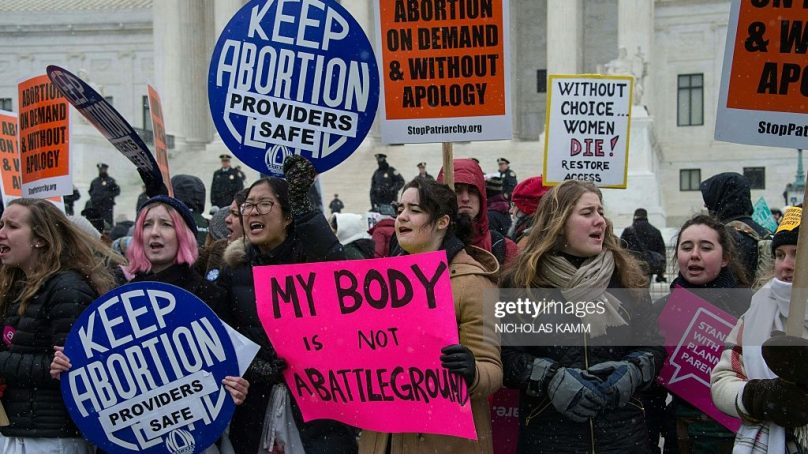 An upcoming case in the US Supreme Court might hasten the end of abortion across roughly half of the United States – a right that the country has defended for nearly 50 years. More than 800 scientists and several scientific organisations have provided evidence to the court showing that abortion access is an important component of reproductive healthcare.

The researchers, some of whom have studied the impact of abortion for many years, are rebutting arguments made to the court that abortion has no beneficial effect on women’s lives and careers — and might even cause them harm.

“The scientific community is eager to weigh in on such an important issue, especially given five decades of evidence concerning the importance of abortion access,” says Stephanie Toti, a director at the New York City-based Lawyering Project, a group that advocates for abortion access in the United States. She adds, “This case is a big deal.”

The case, to be heard by the Supreme Court on December 1, is between the state of Mississippi, which has issued a ban on abortion after 15 weeks of pregnancy, and the Jackson Women’s Health Organization, the only clinic in the state that provides abortions.

In lower US courts, the clinic has successfully argued that the ban violates Roe v. Wade, the landmark 1973 Supreme Court decision that enshrined the federal right to an abortion until the point that a foetus can live outside the womb – a ‘viability standard’ typically set at 22 or 24 weeks of pregnancy.

But state officials are now taking the case to the highest court, seeking to end the precedent set by Roe so that individual states can set their own rules on the legality of abortion.

In a surprise move last week, the Supreme Court announced that it would also hear a separate case on an abortion ban in Texas on November 1; that decision has the potential to hobble Roe by allowing states to ignore the viability standard.

Since Roe, many states have diminished abortion access by, collectively, issuing more than 1,000 restrictions on the procedure, the majority in midwestern and southern states. But legal analysts say the Mississippi case is the first in the Supreme Court in 30 years that could directly overturn or significantly undermine that long-standing precedent.

Some analysts think that is likely to happen, judging from the court’s current composition. Former US president Donald Trump promised to appoint Supreme Court justices who would reverse Roe, and succeeded in replacing three justices during his presidency: there are now six conservative justices who have said that they disagree with abortion precedents, and three liberal justices.

Should the court effectively end Roe, 12 states have policies designed to ban most abortions immediately, and – on the basis of existing and pending policies – researchers predict that another eight to 10 could follow suit.

With much at stake, many people on both sides of the abortion debate – including scientists, religious leaders and athletes – have filed a total of more than 130 ‘amicus’ or ‘friend of the court’, briefs to the Supreme Court in advance of the Mississippi case, Dobbs v. Jackson Women’s Health Organization. A handful of the briefs are authored by hundreds of researchers in public health, social science, health equity and economics, who urge the court to uphold abortion rights on the basis of dozens of peer-reviewed studies examining the effects of abortion on well-being.

Rosie Griffin, an attorney at the law firm Feldesman Tucker Leifer Fidell in Washington DC, which filed an amicus brief signed by almost 550 researchers in public-health, reproductive-health and health policy, along with the American Public Health Association and two research institutes, says her firm felt it was important for scientists to weigh in, even though the justices aren’t obliged to rely on this type of report.

“This is a coalition of folks who have spent their working lives looking at objective measures of maternal and child health,” says Griffin, “and who read Mississippi’s court filings, as well as those in favour of its argument, and said, ‘These claims are not at all supported by the data.’”

State restrictions, dictating, for instance, that teenagers must obtain parental consent for abortion, have been fought in courts for decades. The most recent major Supreme Court decision on abortion — Planned Parenthood v. Casey in 1992 – determined that judges must weigh the reasons for new regulations against the obstacles they create for people seeking abortions. But data to help inform such decisions have been lacking.

This gap was noted by former conservative Supreme Court justice Anthony Kennedy in a 2007 case that upheld a ban on one abortion procedure. Ruling in favour of the restriction, Kennedy decided that it was protecting women from depression and a loss of self-esteem. “While we find no reliable data to measure the phenomenon, it seems unexceptionable to conclude some women come to regret their choice,” he said in his opinion.

But as he wrote those words, studies to supply such data were in the works. Chief among them was an initiative to compare women who had abortions with those who wanted them, but were turned away from clinics for various reasons, including state restrictions or a lack of doctor availability.

Called the Turnaway Study, the effort followed about 1,000 women in the United States for five years after they sought abortions. The women were similar in terms of physical, mental and economic well-being initially, but diverged over time.

Guns and grenades will not undo damage wrought by climate crisis in conflict-prone north, Kenya told