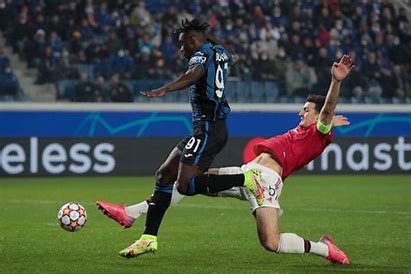 Manchester United scraped a 2-2 draw in their Champions League clash versus Atalanta on Tuesday night thanks to a late volley from Cristiano Ronaldo. But despite the Portuguese rescuing his side in the dying embers of the game, it wasn’t enough to stop United’s poor defending from sticking in the minds of pundits.

One player whose defensive abilities have been the topic of conversation following United’s game is captain Harry Maguire.

After a solid showing at Euro 2020 for England, the 28-year-old has suffered a slump in form since the start of the season. Ole Gunnar Solksjaer’s side have struggled when it comes to avoiding giving away goals and have conceded 15 so far – a higher tally than Brentford, Southampton and Crystal Palace.

And Maguire, who has made up United’s defence in every game bar three this season, has been sighted as part of the issue.

United’s clean sheet and victory against a poor Tottenham side appears to have been a false dawn for the Red Devils’ defensive capabilities. The 28-year-old has been one of Gareth Southgate’s centre backs of choice in the World Cup qualifiers, but risks being pushed down the pecking order.

The Red Devils defender was unable to track back fast enough to stop Atalanta’s Duvan Zapata from scoring the Italian side’s second goal after assuming the Serie A striker was offside.

Speaking on The Sports Bar following the game, talkSPORT’s Jason Cundy put the United captain’s inability to shut out the opposition’s attack down to his fitness.

“He doesn’t look fit honestly, he looks like he’s carrying about a stone over-weight at the minute! He can’t run, he can’t move, he can’t shift his weight, he can’t turn,” the ex-Chelsea and Tottenham defender said.

“He looks kind of heavy footed when he’s running, certainly back to his own goal he looks a little bit uneasy on his feet”.

Former Aston Villa forward Gabby Agbonlahor echoed Cundy’s view and added that he’d be targeting Maguire if he was playing against United.

“They look like conceding every time they play, if there was better finishing yesterday Atalanta could’ve scored five,” Agbonlahor said.

Maguire suffered a calf injury back in October, which may be a reason he’s holding back on the pitch. But Manchester United legend Paul Scholes is unsure this is the sole reason for Maguire’s sharp decline and worries it has no simple explanation.

“I don’t know if he is injured or has a hangover from the Euros; it just doesn’t look right,” Scholes explained, “He is just all over the place.”