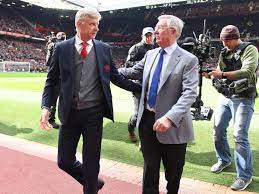 Manchester United had to deal with the emergence of Wenger’s Arsenal around the turn of the century, with the Gunners winning three titles in the space of seven years and going through the 2003-04 league season undefeated.

Ferguson soon re-established his United team as the dominant force in England, winning another five Premier League titles after Arsenal’s Invincibles campaign, but Dixon says the legendary manager “couldn’t deal with” the arrival of Wenger.

“Wenger and Ferguson always had this thing going on which was fantastic for the players because it deflected and took the pressure off us,” two-time Premier League winner Dixon told Joe.

“Those two were at loggerheads every day in the papers. Sir Alex couldn’t deal with Arsene to begin with because he had a new way about him, the way he talked, the way he flippantly said things.

“The mind games between them… there’s no one better than Sir Alex at dropping the right word at the right time and putting pressure on someone. But Arsene didn’t care so it didn’t work on him.

“You could see Sir Alex getting a little bit… I think over time you would say that Wenger got him and then Sir Alex responded.

“They hated each other during the height of it all but I think they’ve grown to respect each other.”

Ferguson spent almost 27 years in charge of Manchester United, while Wenger was at Arsenal for 22 years. Earlier this year, Ferguson squashed any rivalry with Wenger by insisting he is “proud” to call the Gunners hero a “friend”.

“I am really happy for Arsene Wenger. I have great respect for him and for the job he has done at Arsenal,” Ferguson said.

“It is a great testament to his talent, professionalism and determination that he has been able to dedicate 22 years of his life to a job he loves. Alex Ferguson’s assistant explains how Solskjaer can make Man Utd “unstoppable”

“In an area where football managers sometimes only last one or two seasons, it shows what an achievement it is to serve that length of time at a club the size of Arsenal.

“I am pleased that he has announced he is leaving at this stage of the season, as he can now have the send-off that he truly deserves.

“He is, without doubt, one of the greatest Premier League managers and I am proud to have been a rival, a colleague and a friend to such a great man.”