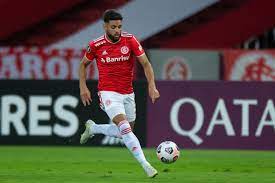 Arsenal are reportedly interested in trying to push through a deal to sign Internacional striker Yuri Alberto in one of the next two transfer windows.

The Gunners are on the lookout for a new striker and have been linked with the likes of Dominic Calvert-Lewin, Jonathan David, Alexander Isak and Dusan Vlahovic. However, a report on Tuesday claims that Arsenal have now cooled their interest in Spurs target Vlahovic.

Mikel Arteta wants more goals from his attackers, with Pierre-Emerick Aubameyang not finding the mark in the Premier League since October. Alexandre Lacazette, meanwhile, has only scored one league all season.

There is also every likelihood that the latter moves on either in January for a bargain fee or for free next summer. Back-up option Eddie Nketiah is also likely to do the same after struggling for first-team chances. With that in mind, Arsenal technical director Edu is already looking at potential new options for Arteta.

One of those is Alberto, with Goal Brazil claiming that the Gunners have reached out to the player’s agent Andre Cury. The 20-year-old made his senior debut at Santos in 2017 but did not make the grade there.

After just 16 appearances he joined Internacional, where he has established himself as one of the top young talents in Brazilian football. The impressive Alberto has scored 19 goals and has provided four assists so far this term. However, his contract still has over three-and-a-half years left to run.

Despite still being committed to Internacional for some time yet, the report adds that the Brazilian outfit will consider selling if a bid in the region of £12.7 million ($17 million) is tabled by Arsenal or any other interested club.

While clearly a talented player, Alberto would represent a gamble for Arsenal though. His lack of experience at European level is a concern, although if he was signed alongside a more experienced frontman then it could be a masterstroke by Edu – especially at the proposed price.

Meanwhile, in-form Napoli attacker Dries Mertens has spoken about a clause in his contract which will frustrate potential suitors Arsenal and Tottenham. The Belgium international has long been linked with a Premier League switch. His impressive ability would make him a certain hit at either north London side.

The centre-forward, who can also operate as a second striker, is in red hot form right now. Five goals have come his way in Napoli’s last four games. Two of those were in the 4-0 victory over Lazio on November 28.

Mertens’ recent record is even more impressive. That’s due to the fact that he’s featured for less than 68 minutes in each of those appearances. The star’s contract expires in June. That has led to rumours that a move to England could finally be on the cards during 2022.

However, he has now pledged his allegiance to Napoli, while also revealing a clause which the club can exercise.

“I like to play here and hopefully, then if you don’t, I’ll give the hand and I will thank you for all the years that I have played in Naples,” Mertens told Sky Italia (via Sports Mole).

“I am honoured to be here and, in any case, sooner or later everything will have to end. Hopefully as late as possible. Then the team is doing well. So many good players have arrived and sooner or later I will have to leave the place. There is a renewal clause in favour of Napoli, I hope it will be exercised, then let’s see.”

US slaps sanctions on senior government officials in Iran, Syria and Uganda for human rights abuses