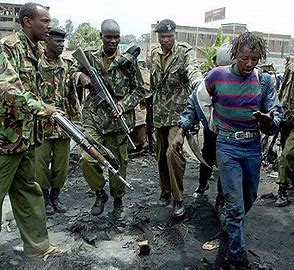 From police to a ‘gangster’ state, Kenya stares into the abyss

“Nobody can stop reggae” is a refrain that connotes the Building Bridges Initiative campaign to amend the constitution, but in Kenyan politics it communicates political anarchy security and democracy experts fear will drive the country deep into the abyss.

Beneath the reforms refrain or anthem – as politicians refer to it – is an underlying terse warning about the inherent risk of opposing it. The flipside equally bears similar risks: the wrath of opponents if one supports the initiative.

It is not a new phenomenon: it is as old as competitive politics and cash economy to the extent it is perceived as a way of life that is now culture that in recent years has brought Kenya on the brink of war.

Research findings by Global Initiative Against Transnational Organized Crime (GI-TOC) on Kenya’s “criminal economy” paints a picture of a country hurtling a failed state. This is against the backdrop of past and current push for “inclusivity”, which often relegates the citizenry to the periphery in decision-making.

Titled the Politics of Crime: Kenya’s Gang Phenomenon, the report is unflattering about the gangland mindset of governing elite that over the decades has marketed “inclusivity” as a palliative to the despair that finds expression in criminal activities.

Political acquired notoriety during the quest for political pluralism in the 1980s when Kenya was ruled one party – Kanu. A militia disguised Kanu youth-wingers was a tool of terror that relegated the police the backburner. The police were subservient to the militia that ran amok during elections.

The GI-TOC findings tally with a new report that handed last week to President Uhuru Kenyatta by the National Intelligence Service that warns of a resurgence of criminal gangs – Mugiki in Central Kenya, 42 Brothers in western Kenya, Wakali Wao at the coast and Chingororo in Kisii, among others.

In the NIS report the ethnic, economic and regional fissures created by political realignments are re-igniting long-suppressed anger successive regimes from the colonial era to-date have failed to address.

The failure and reluctance by the state to deal decisively with the criminal gangs and provide security manifests in the ambiguous definition of a criminal gang.

According to GI-TOC, “The definition of gangs in Kenya bedevils writing on the topic, but it is important as public perceptions of the problem play a key role in managing it. A state definition is used to delineate and count gangs and these catalogues are also used to ban them. In 2002, then President Daniel arap Moi banned 18 criminal gangs. His successor, Mwai Kibaki, outlawed 33 in 2010. And the current President Uhuru Kenyatta, banned 90 gangs in 2016.”

The bans did not usher in improved security as the gangs metamorphosed into new outfits. The bans were informed by a Ministry of Interior report that claimed there were 326 gangs by 2017, a rise from 33 in its 2010 count.

“The media jumped onto these figures, decrying ‘an exponential growth of 897 per cent within seven years. In the same year, a World Bank report claimed that in one ward (Timbwan) in Mombasa there were 55 criminal gangs. In 2020, authorities in Mombasa claimed without providing a justification that they had identified 132 gangs operating in Mombasa,” GI-TOC reports.

Consequently, when security is compromised, the ordinary people take matters into their hands.

“Gangs are largely prevalent in poor communities, particularly in informal settlements where they are part of the social and economic infrastructure of communities. Although they are violent and unjust, they do provide access to services such as illegal electricity connections, security for a fee or land,” the GI-TOC investigation found.

The report was launched virtually on November 18, 2020.

The definition of a gang is relative. The report says, “What constitutes a gang at the neighbourhood level – many young men who would be identified as thugs in mainstream discourse – may not be regarded that way in their own areas.”

Thus, painting all young men with the same brush has led to many people arbitrarily being put onto police hit lists and extra-judicially killed.

“In addition to the human rights consequences, this has affected perceptions of state legitimacy in some areas where residents may view the police as an occupying force that intends to kill and maim its residents rather than protect them,” GI-TOC found.

The findings tie in with an interview former Chief Justice Willy Mutunga had with a Dutch newspaper NRC Handelsblad in 2016 in which he described Kenya as a “bandit economy” where one aligns to economic saboteurs of risk being killed or exiled if they challenge them.

“The influence of the cartels is overwhelming. They are doing illegal business with politicians. If we do not fight the cartels, we become their slaves. But leaders who do take on the cartels must be prepared to be killed or exiled,” Dr Mutunga, once detained for his unswerving stand on democracy and rule of law, told NRC Handelsblad months before he left office.

He was more graphic, “Larger cartels make money through trafficking illegal migrants, counterfeit money, weapons, drugs and consumer goods. In Kenya, the counterfeit economy is worth $1.2 billion annually, according to the Kenya Association of Manufacturers. It supports politicians in a big way. Now we deal only with the Chinese. The deal is based on commission. Guys are saying: we just had expensive elections where we spent $100m.

In Kenya, Mt Kenya mafia during founding President Jomo Kenyatta and his son Uhuru Kenyatta’s reigns refers to what is sarcastically referred to as steak-holders (a pun on stakeholders). The so-called constitutional and statutory reforms, GI-TOC found out, are no more than the proverbial game of musical chairs.

“Paradoxically, corrupt state protection for gangs exists despite the government’s tough anti-crime message and its unofficial ‘shoot-to-kill’ policies. These approaches are ineffective on their own, but police corruption and the ways in which this benefits the elite diminish the likelihood of better solutions coming from within the criminal justice system,” it says.

The investigation, a product of the collaboration of Executive Director of Centre for Multiparty Democracy in Kenya Frankline Mukwanja, investigative journalist Ken Opala and senior GI-TOC analyst Simone Haysom, found out that the citizenry responds to under-governance in their neighbourhoods with informal security arrangements.

“These range from advocacy efforts for more humane policing through to violent mob-lynching events. Residents do not appear to have homogenous perspectives or unified interests when it comes to the presence and operations of criminal gangs. Both the existing social capital and the inherent divisions in communities come into play in determining their resilience,” they write.

The investigators found that , even if the police were “pushed to address the political protection and criminal capture of urban services – police work that is more about intelligence, financial crime investigations and developing strong cases – they will not find sustainable solutions to the problem.”

The intelligence arm of the police also links escalation of political activities in the country to spiralling insecurity, hence the resurgence of criminal gangs.

The 35-page NIS report says, “Whereas the threats posed by Mungiki significantly declined during the period, there was re-emergence of activities by its remnants in parts of Nyeri, Murang’a, Kirinyaga, Kiambu and Laikipia counties. This was partly attributed to the support of the outlawed group by some political leaders coupled with the Mungiki leader’s quest to reassert his position as the sect leader.”

While the state acknowledges the negative impact of gang activities on the economic and investments, says GI-TOC, its interventions to address the problem have only contained the phenomenon for brief periods before it flares up again.

The same applies to policies that affect the governed. When the governing is out of depth, the executive in Kenya and its rivals coalesce around a populist agenda to hoodwink the citizenry that serious attention is being given to their economic and social plight.

The latest such tactic is the ongoing campaign to amend the constitution to expand the executive and, possibly, repeal the two five-year presidential term limits. Questions have been raised about the urgency of the envisaged government structure against the backdrop of runway graft and the inability to deliver the 2013 and 2017 election promises.

In the, the GI-TOC and NIS reports point out that “solutions to the rise and resilience of organised criminal gangs are political and developmental and require broader responses than a reliance solely on the criminal justice system.”