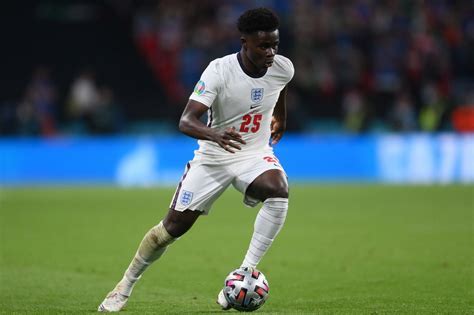 From desperados to builders of England national team: the changing structure and texture of Arsenal

The Arsenal influence in the England national side is increasing and by World Cup 2026 as many as six of the first XI could be representing the Gunners in North America.

The England national team has been the healthiest and most competitive it has been since the famous 1966 World Cup-winning side. Evidenced by their participation at the Euro 2020 final, narrowly losing on penalties to Italy.

The strength comes from a host of young players and Arsenal have an increasing presence in the group. Bukayo Saka was the only Gunners representative during the summer tournament this year, however, Ben White and Aaron Ramsdale who made the squad were both bought in the transfer window.

Since then, Emile Smith-Rowe has earned his first call-up to the senior side and scored on his first start in the 10-0 rout of San Marino.

With the next World Cup only a year away in the winter of 2022 out in Qatar, Arsenal will have the opportunity to watch more of their players find a way into the squad and establish themselves.

However, looking even further ahead at the North American World Cup in 2026, it is possible that not only could there be a strong representation from Arsenal but a dominant presence in the side.

In five years’ time, Smith Rowe and Saka will be on the verge of their prime years whilst White and Ramsdale will be at their peaks.

Furthermore, the Gunners have some young stars shining brightly in the England youth setups too.

Folarin Balogun earned his first England under-21 start and scored whilst Charlie Patino has broken into the under-19s side and remains one of the most highly rated in the Arsenal academy.

Theoretically, the Gunners could have six players make their way into the Three Lions starting eleven for the 2026 World Cup.

This would be to the benefit of the nation having so many representatives who are comfortable playing with one another. It isn’t beyond imagination to see a future where Saka, Smith-Rowe and Balogun make up the Arsenal frontline.

This could be transferred to the national team much like Barcelona’s midfield trio of Xavi, Andreas Iniesta and Cesc Fabregas regularly featuring for Spain during their international dominance.

Not to say the Arsenal boys will reach the level of the aforementioned Spaniards, but the theory of an established relationship at club level also present in the national side and succeeding is not farfetched.

White and Ramsdale’s distribution for Arsenal would be a true asset to England and the excitement of Patino coming through could see a future midfield pairing with Borussia Dortmund superstar Jude Bellingham.

However, the presence of Declan Rice is sure to be the greatest obstacle for that to happen alongside further youngsters breaking through in the next five years.

It is all fantasy and theory right now but the excitement amongst the Arsenal fan base and the England national side is back in a strong way and hopefully, that will continue for years to come.