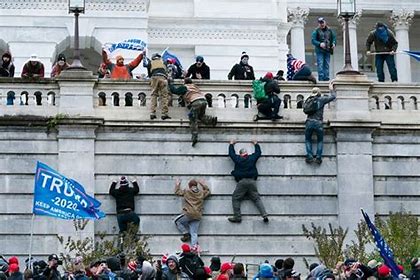 Free America always had an insurgent mindset, breaking institutions down, not building them up

The government, which did so little for ordinary Americans, was still the enemy, along with “governing elites.” But for the sinking working class, freedom lost whatever economic meaning it had once had. It was a matter of personal dignity, identity.

Members of this class began to see trespassers everywhere and embraced the slogan of a defiant and armed loneliness: Get the fuck off my property.

Take this mask and shove it. It was the threatening image of a coiled rattlesnake: “Don’t tread on me.” It achieved its ultimate expression on January 6, in all those yellow Gadsden flags waving around the Capitol – a mob of freedom-loving Americans taking back their constitutional rights by shitting on the floors of Congress and hunting down elected representatives to kidnap and kill. That was their freedom in its pure and reduced form.

A character in Jonathan Franzen’s 2010 novel, Freedom, puts it this way: “If you don’t have money, you cling to your freedoms all the more angrily. Even if smoking kills you, even if you can’t afford to feed your kids, even if your kids are getting shot down by maniacs with assault rifles. You may be poor, but the one thing nobody can take away from you is the freedom to fuck up your life.”

The character is almost paraphrasing Barack Obama’s notorious statement at a San Francisco fundraiser about the way working-class white Americans “cling to guns or religion or antipathy to people who aren’t like them, or anti-immigrant sentiment or anti-trade sentiment, as a way to explain their frustrations.”

The thought wasn’t mistaken, but the condescension was self-incriminating. It showed why Democrats couldn’t fathom that people might “vote against their interests.” Guns and religion were the authentic interests of millions of Americans.

Trade and immigration had left some of them worse off. And if the Democratic Party wasn’t on their side – if government failed to improve their lives – why not vote for the party that at least took them seriously?

Free America always had an insurgent mindset, breaking institutions down, not building them up. Irresponsibility was coded into its leadership. Rather than finding new policies to rebuild declining communities, Republicans mobilised anger and despair while offering up scapegoats. The party thought it could control these dark energies on its quest for more power, but instead they would consume it.

They go to college with one another, intermarry, gravitate to desirable neighbourhoods in large metropolitan areas and do all they can to pass on their advantages to their children. They are not one percenters – those are mainly executives and investors – but they dominate the top 10 per cent of American incomes, with outsize economic and cultural influence.

They’re at ease in the world that modernity created. They were early adopters of things that make the surface of contemporary life agreeable: HBO, Lipitor, MileagePlus Platinum, the MacBook Pro, grass-fed organic beef, cold-brewed coffee, Amazon Prime. They welcome novelty and relish diversity. They believe that the transnational flow of human beings, information, goods, and capital ultimately benefits most people around the world.

You have a hard time telling what part of the country they come from, because their local identities are submerged in the homogenizing culture of top universities and elite professions. They believe in credentials and expertise – not just as tools for success, but as qualifications for class entry. They’re not nationalistic – quite the opposite – but they have a national narrative. Call it “Smart America.”

The cosmopolitan outlook of Smart America overlaps in some areas with the libertarian views of Free America. Each embraces capitalism and the principle of meritocracy: the belief that your talent and effort should determine your reward. But to the meritocrats of Smart America, some government interventions are necessary for everyone to have an equal chance to move up.

The long history of racial injustice demands remedies such as affirmative action, diversity hiring, and maybe even reparations. The poor need a social safety net and a living wage; poor children deserve higher spending on education and health care. Workers dislocated by trade agreements, automation, and other blows of the global economy should be retrained for new kinds of jobs.

Still, there’s a limit to how much government the meritocrats will accept. Social liberalism comes easier to them than redistribution, especially as they accumulate wealth and look to their 401(k)s for long-term security. As for unions, they hardly exist in Smart America. They’re instruments of class solidarity, not individual advancement, and the individual is the unit of worth in Smart America as in Free America.

The word meritocracy has been around since the late 1950s, when a British sociologist named Michael Young published The Rise of the Meritocracy. He meant this new word as a warning: Modern societies would learn how to measure intelligence in children so exactly that they would be stratified in schools and jobs according to their natural ability.

In Young’s satirical fantasy, this new form of inequality would be so rigid and oppressive that it would end in violent rebellion.

But the word lost its original dystopian meaning. In the decades after World War II, the GI Bill, the expansion of standardised tests, the civil-rights movement, and the opening of top universities to students of colour, women, and children of the middle and working classes all combined to offer a path upward that probably came as close to truly equal opportunity as America has ever seen.

After the 1970s, meritocracy began to look more and more like Young’s dark satire. A system intended to give each new generation an equal chance to rise created a new hereditary class structure. Educated professionals pass on their money, connections, ambitions, and work ethic to their children, while less educated families fall further behind, with less and less chance of seeing their children move up.

By kindergarten, the children of professionals are already a full two years ahead of their lower-class counterparts, and the achievement gap is almost unbridgeable. After seven decades of meritocracy, a lower-class child is nearly as unlikely to be admitted to one of the top three Ivy League universities as they would have been in 1954.

This hierarchy slowly hardened over the decades without drawing much notice. It’s based on education and merit, and education and merit are good things, so who would question it? The deeper injustice is disguised by plenty of exceptions, children who rose from modest backgrounds to the heights of society. Bill Clinton (who talked about “people who work hard and play by the rules”), Hillary Clinton (who liked the phrase God-given talents), and Barack Obama (“We need every single one of you to develop your talents and your skills and your intellect”) were all products of the meritocracy.

Meritocracy seems like the one system that answers what Tocqueville called the American “passion for equality.” If the opportunities are truly equal, the results will be fair.

But it’s this idea of fairness that accounts for meritocracy’s cruelty. If you don’t make the cut, you have no one and nothing to blame but yourself. Those who make it can feel morally pleased with themselves – their talents, discipline, good choices – and even a grim kind of satisfaction when they come across someone who hasn’t made it. Not “There but for the grace of God go I,” not even “Life is unfair,” but “You should have been more like me.”