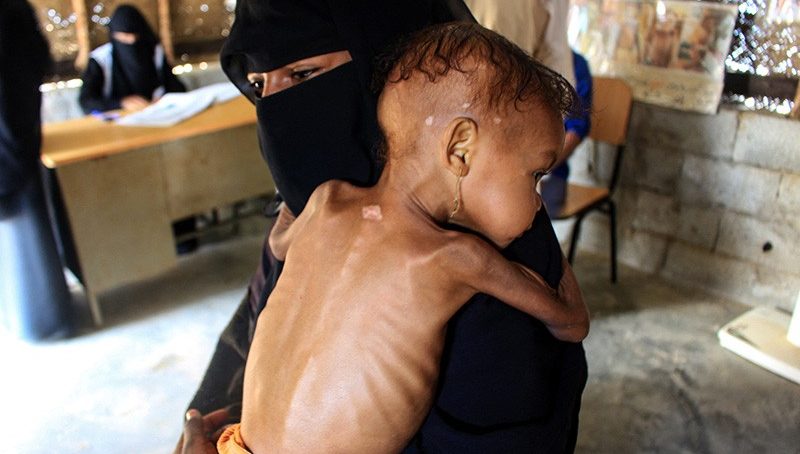 As the devastation in Ukraine continues to unfold, many of the warnings about the global food crisis precipitated by the war have focused on the risks of famine and severe food insecurity. The Food and Agriculture Organization (FAO) of the United Nations, for instance, projected last month that between eight million and 13 million more people could become undernourished in 2022-23.

The warning means that they will be unable to acquire enough food to meet the daily minimum energy requirements over one year. There are already more than 800 million undernourished people globally.

Another major concern is the possibility of severe price increases and disruptions to global systems for food, fertilizer and fuel, leading to millions more malnourished people in low- and middle-income countries (LMICs).

Women and children are particularly affected by the food shortages and high food prices resulting from the war against Ukraine. They are especially vulnerable to malnutrition: children’s nutritional needs are high relative to their body size, and women’s are high when pregnant or lactating. Furthermore, existing gender inequality and gender power imbalances, which can be exacerbated during crises, mean that women have less agency to direct resources towards feeding themselves and their children.

Lastly, these groups have already been disproportionally affected by the combined effects of other conflicts, climate change and the Covid-19 pandemic.

The impact of malnutrition might be less immediately visible than that of hunger. But left untreated, malnutrition can increase the risk of illness and death in the short term and ultimately have multi-generational and irreversible effects.

In mid-March, the FAO called on governments to avoid implementing restrictions that could hamper the global trade in food, fertiliser and fuel. UN agencies are also urging governments to continue to expand various social protection programmes offered during the Covid-19 pandemic. These include the distribution of cash or food or food vouchers for households in need.

We applaud these efforts. But more is needed. Governments of LMICs, donors and other funders must invest now to safeguard people’s access to nutritious foods. Not doing so will mean immediate effects on child growth, development and immunity and an increase in child deaths in the coming months.

In the longer term, a global malnutrition crisis could lead to lifelong effects on education, diet-related chronic diseases and a decline in people’s capacity to thrive and contribute to their countries’ economic growth.

Record-high price hikes and disruptions in the trade of food, fertiliser and fuel threaten to further increase the global number of malnourished people, especially women and children, in three ways.

Reduced fertiliser supplies and higher prices for shipping and fuel will push up the costs of growing, harvesting, transporting and processing food.

Before the war, Russia and Ukraine together accounted for about 30 per cent of global wheat exports and produced more than half of the world’s sunflower oil. Russia provided 13 per cent of the world market of fertilizers and 11 per cent of crude-oil exports.

The latest Food Price Index — a composite score of the relative price fluctuations of the most common food commodities — published on April 8 by the Food and Agriculture Organization of the United Nations, showed a giant leap of 12.6 per cent from February to March.

After nearly two months of conflict, wheat commodity prices have increased by around 20 per cent, to US$384 per tonne — up by more than 50 per cent from a year ago. In Egypt, where 80 per cent of wheat comes from Ukraine and Russia, concern about shortages has already pushed up the price of bread by as much as 25 per cent.

Likewise, disruptions in the supply of sunflower oil are driving up the prices of all vegetable oils. In South Africa in early March, the cost of cooking oil rose by around 28 per cent above pre-war prices, partly as a result of panic buying.

First, increased prices and reduced availability and access to food will directly affect the quality of people’s diets. Indeed, higher food prices disproportionately affect low-income countries, because their populations already spend a larger proportion of household income on food than do people in wealthy countries.

Survey data collected during previous economic crises, such as in Indonesia and Bangladesh, indicate that when food prices rise, people maintain their consumption of calories by buying more highly processed foods, or cheap staples such as rice and maize (corn). And they reduce their consumption of more expensive nutritious foods such as fruit, vegetables, meat and dairy.

Children and women consuming unhealthy diets are at an increased risk of all forms of malnutrition (micronutrient deficiencies, wasting, stunting, becoming overweight) and ultimately of dying. Women who have unhealthy diets are at a high risk of delivering babies of low birth weight, who are in turn likely to be malnourished early in life.

And infants who don’t get the nutrients they need in their first 1,000 days (from conception to around two years of age) are more likely to be physically and cognitively impaired than are well-nourished infants. This means malnourished children have a greater risk of performing poorly at school and of being less economically productive in adulthood.

It also makes them more likely as adults to have children who are malnourished – probably because of epigenetic effects during gestation.