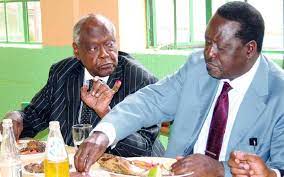 Charles Njonjo goes down in history as one of the best examples of what NOT to be as a public servant, a leader, and a politician. He also qualifies as what a true Pan-African MUST NOT BE.

His uniquely pro-British and shamefully self-hating anti-African stances have their roots in his legacy of collaboration inherited from his father, a paramount chief who capitulated and worshipped the colonial masters, in exchange for preferential treatment even when this came at the high price of having his fellow Kikuyus getting beheaded.

His is a legacy of betraying freedom fighters such as the Mau Mau, a legacy of creating cells of moles, informants, and spies whose assignment was to give to the British colonialist’s names of those opposed to the colonial rule.

Charles Njonjo is the true poster boy of the Lari collaborators who the Mau Mau slaughtered in the infamous Lari Massacre. His hate for his African heritage was clear when he openly stated that he regretted having been born a black African. He was also a petty tribalist who at one point said he would not shake hands with Luos, arguing that they were unclean.

His late-age attempt at rapprochement with the Odingas has been viewed by most historians and public intellectuals as being motivated by a sense of guilt and not any real respect.

A naive man who almost always overrated himself, he is said to have exuded confidence that he would easily snatch the presidency from Daniel Moi after the second President took over following the death of the country’s first president, Jomo Kenyatta.

His attempt to dethrone Moi in a coup in 1982 failed miserably, and Moi pushed the haughty Njonjo from public life for more than a decade.

Historians have a duty to chronicle the man as a bearer of a disdainful legacy of collaboration with forces that disinherited our people, molested our great grandmothers and grandmothers, crushed our African spirit, and through the actions of his father, lengthened the period our forefathers took to recapture our freedom.

Njonjo helped entrench the culture of tribal hatred and malicious politicking in post-independence Kenya and sowed the seeds of justice for the highest bidder, evils that continue to plague the republic more than five decades since independence.

Food, sleep and health: The future belongs to those who wake up early for they’ll eat and sleep healthily