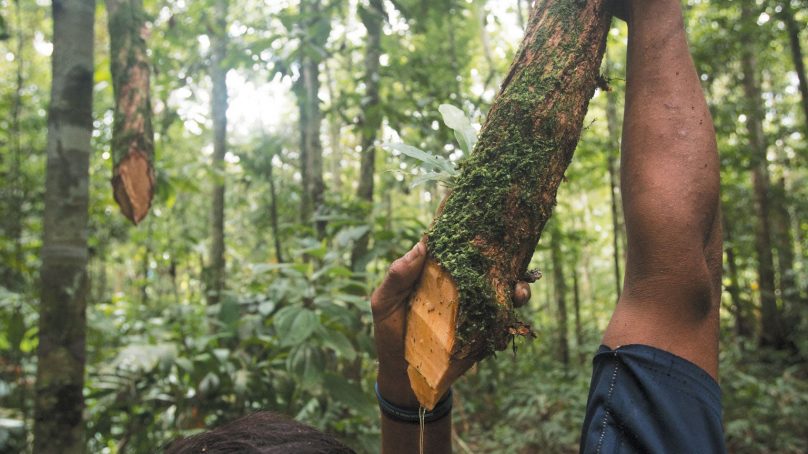 There was a reason I asked Julio, my guide, about “hidden” sources of water, such as vines, that Tsimane’ consumed. Dino Nate, my local research assistant and my colleague Kelly Rosinger and I were being taken around the Bolivian Amazon by Julio, one of my Tsimane’ friends.

This was after one evening after dinner a few weeks into my first bout of fieldwork in Bolivia in 2009, the combination of thirst and hunger led me to devour a large papaya. The juices ran down my chin as I ate the ripe fruit. I didn’t think much of it at the moment, but soon after I got into my mosquito net for the night, my error revealed itself.

In the Bolivian Amazon, the humidity reaches up to 100 per cent at night. Every evening before going to bed I stripped down to my boxers, then rolled my clothes up tightly and put them into large resealable plastic bags so they wouldn’t be soaked the next morning. After about an hour of lying in my mosquito net praying for a gust of wind to cool me off, a dreaded sensation set in: I needed to urinate.

Knowing the amount of work it would take to get dressed, relieve myself and then refold and stow my clothes, I cursed my decision to eat the papaya. And I had to repeat the process again later that night. I started thinking about how much water was in that fruit – the equivalent of three cups, it turns out. No wonder I had to pee.

Our dietary flexibility is perhaps our best defence against dehydration. As I learned the hard way on that sweltering night, the amount of water present in food contributes to total water intake. In the US, around 20 per cent of the water people ingest comes from food, yet my work among Tsimane’ found that foods, including fruits, contribute up to 50 percent of their total water intake.

Adults in Japan, who typically drink less water than adults in the US, also get around half their water from the foods they eat. Other populations employ different dietary strategies to meet their water needs. Daasanach pastoralists in northern Kenya consume a great deal of milk, which is 87 per cent water. They also chew on water-laden roots.

Chimpanzees, our closest living primate relatives, also exhibit dietary and behavioural adaptations to obtaining water. They lick wet rocks and use leaves as sponges to collect water. Primatologist Jill Pruetz of Texas State University has found that in very hot environments, such as the savannas at Fongoli in Senegal, chimps seek shelter in cool caves and forage at night rather than during the day to minimise heat stress and conserve body water. But overall nonhuman primates get most of their water from fruits, leaves and other foods.

Humans have evolved to use less water than chimps and other apes, despite our greater sweating ability, as new research by Herman Pontzer of Duke University and his colleagues has shown. Yet our greater reliance on plain water as opposed to water from food means that we must work hard to stay hydrated.

Exactly how much water is healthy differs between populations and even from person to person, however. Currently there are two different recommendations for water intake, which includes water from food.

The first, from the US National Academy of Medicine, recommends 3.7 litres of water a day for men and 2.7 litres for women, while advising pregnant and lactating women to increase their intake by 300 and 700 millilitres, respectively.

The second, from the European Food Safety Authority, recommends 2.5 and 2.0 litres a day for men and women, respectively, with the same increases for pregnant and lactating women. Men need more water than women do because their bodies are larger and have more muscle on average.

These are not hard-and-fast recommendations. They were calculated from population averages based on surveys and studies of people in specific regions. They are intended to fulfil the majority of water needs for moderately active, healthy people living in temperate and often climate-controlled environments. Some people may need more or less water depending on factors that include life habits, climate, activity level and age.

In fact, water intake varies widely even in relatively water-secure locations such as the US. Most men consume between 1.2 and 6.3 litres on a given day and women between 1.0 and 5.1 litres. Throughout human evolution our ancestors’ water intake probably also varied substantially based on activity level, temperature and exposure to wind and solar radiation, along with body size and water availability.

Yet it is also the case that two people of similar age and physical condition living in the same environment can consume drastically different amounts of water and both be healthy, at least in the short term. Such variation may relate to early life experiences.

Humans undergo a sensitive period during foetal development that influences many physiological functions, among them how our bodies balance water. We receive cues about our nutritional environment while in the womb and during nursing. This information may shape the offspring’s water needs.

Experimental studies have demonstrated that water restriction among pregnant rats and sheep leads to critical changes in how their offspring detect bodily dehydration. Offspring born to such water-deprived mothers will be more dehydrated (that is, their urine and blood will be more concentrated) than offspring born to nondeprived mothers before they become thirsty and seek out water. These findings indicate that the dehydration-sensitivity set point is established in the womb.

Thus, the hydration cues received during development may determine when people perceive thirst, as well as how much water they drink later in life. In a sense, these early experiences prepare offspring for the amount of water present in their environment.

If a pregnant woman is dealing with a water-scarce environment and is chronically dehydrated, it may lead to her child consistently drinking less water later in life—a trait that is adaptive in places where water is hard to come by. Much more work is needed to test this theory, however.

Although early life experiences may determine how much water we drink without our being aware of it, locating safe sources of water is something we actively learn to do. In contrast to my accidental discovery of the hydrating effects of the papaya, Tsimane’ deliberately seek out water-rich foods.

In an environment without clean water, eating instead of drinking more water may protect against exposures to pathogens. Indeed, my study found that those Tsimane’ who consumed more of their water from foods and fruit, such as papayas, were less likely to experience diarrhoea.

Many societies have developed dietary traditions that incorporate low-alcohol, fermented beverages, which can be essential sources of hydration because fermentation kills bacteria. (Beverages containing higher percentages of alcohol, on the other hand, increase urine production and thereby deplete the body’s water stores.)

Like other Amazonian populations, Tsimane’ drink a fermented beverage called chicha that is made from yuca or cassava. For Tsimane’ men, consuming fermented chicha was associated with lower odds of becoming dehydrated.

Getting enough water is one of humanity’s oldest and most pressing challenges. Perhaps it is not surprising, then, that we map the locations of water sources in our minds, whether it is a highway rest stop, desert spring or jungle plant.

As I watched Julio cut the vine down, his son was also watching, learning where this critical water source was. I glimpsed how this process plays out across generations. In so doing, I realised that being covered in sweat and finding ways to replace that lost water is a big part of what makes us human.