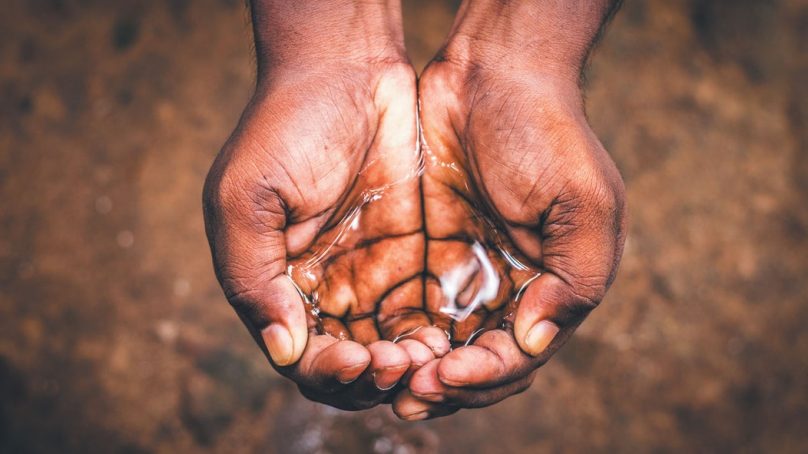 We trekked through the Bolivian Amazon, drenched in sweat. Draped head to toe in bug repellent gear, we stayed just ahead of the clouds of mosquitoes as we sidestepped roots, vines and giant ants. My local research assistant Dino Nate, my partner Kelly Rosinger and I were following Julio, one of my Tsimane’ friends and our guide on this day.

Tsimane’ are a group of forager-horticulturalists who live in this hot, humid region. Just behind us, Julio’s three-year-old son floated happily through the jungle, unfazed by the heat and insects despite his lack of protective clothing, putting my perspiration-soaked efforts to shame.

We stopped in front of what looked like a small tree but turned out to be a large vine. Julio told us Tsimane’ use it when they are in the old-growth forest and need water. He began whacking at the vine from all sides with his machete, sending chips of bark flying with each stroke.

Within two minutes he had cut off a meter-long section. Water started to pour out of it. He held it over his mouth, drinking from it for a few seconds to quench his thirst, then offered it to me. I put my water bottle under the vine and collected a cup. It tasted pretty good: light, a little chalky, almost carbonated.

As part of my field research, I was asking Julio and other Tsimane’ people how they obtain the drinking water they need in different places – in their homes, in the fields, on the river or in the forest. He told me only two types of vines are used for water; the rest don’t work or make you sick. But when he pointed to those other vines, I could hardly tell a difference.

The vines are a hidden source of water. Julio’s observations raise a fundamental question of human adaptation: How did our evolutionary history shape the strategies we use to meet our water needs, particularly in environments without ready access to clean water?

Here in the forest, we were in a relatively water-rich environment, but as we moved away from streams, Julio still knew exactly where and how to get water. Humans are not alone in keeping close track of natural water sources – many animals make mental maps of their surroundings to remember where important resources are found and some even alter their environments for water. But we are unique in taking much more extreme measures.

Throughout history people have drastically engineered their environments to ensure access to water. Take the historic Roman city of Caesarea in modern-day Israel. Back when it was built, more than 2,000 years ago, the region did not have enough naturally occurring freshwater to sustain a city.

Because of its geographic importance to their colonial rule, the Romans, through extractive slave labour, built a series of aqueducts to transport water from springs as far as 16 kilometres away. This arrangement provided up to 50,000 people with approximately 145 litres of water per capita a day.

Today cities use vast distribution networks to provide potable water to people, which has led to remarkable improvements in public health. When we have plenty of water, we forget how critical it truly is. But when water is precious, it is all we think about. All it takes is news of a shutoff or contamination event for worries about water insecurity to take hold.

Without enough water, our physical and cognitive functions decline. Without any, we die within a matter of days. In this way, humans are more dependent on water than many other mammals are. Recent research has illuminated the origins of our water needs – and how we adapted to quench that thirst. It turns out that much as food has shaped human evolution, so, too, has water.

To understand how water has influenced the course of human evolution, we need to page back to a pivotal chapter of our prehistory. Between around three million and two million years ago, the climate in Africa, where hominins (members of the human family) first evolved, became drier.

During this interval, the early hominin genus Australopithecus gave way to our own genus, Homo. In the course of this transition, body proportions changed: whereas australopithecines were short and stocky, Homo had a taller, slimmer build with more surface area.

These changes reduced our ancestors’ exposure to solar radiation while allowing for greater exposure to wind, which increased their ability to dissipate heat, making them more water-efficient.

Other key adaptations accompanied this shift in body plan. As climate change replaced forests with grasslands, and early hominins became more proficient at traveling on two legs in open environments, they lost their body hair and developed more sweat glands.

These adaptations increased our ancestors’ ability to unload excess heat and thus maintain a safe body temperature while moving, as work by Nina Jablonski of Pennsylvania State University and Peter Wheeler of Liverpool John Moores University in England has shown.

Sweat glands are a crucial part of our story. Mammals have three types of sweat glands: apocrine, sebaceous and eccrine. The eccrine glands mobilise the water and electrolytes inside cells to produce sweat. Humans have more eccrine sweat glands than any other primate.

A recent study by Daniel Aldea of the University of Pennsylvania and his colleagues found that repeated mutations of a gene called Engrailed 1 may have led to this abundance of eccrine sweat glands. In relatively dry environments akin to the ones early hominins evolved in, the evaporation of sweat cools the skin and blood vessels, which, in turn, cools the body’s core.

Armed with this powerful cooling system, early humans could afford to be more active than other primates. In fact, some researchers think that persistence hunting – running an animal down until it overheats – may have been an important foraging strategy for our ancestors, one they could not have pursued if they did not have a means to avoid overheating.

This enhanced sweating ability has a downside, however: it elevates our risk of dehydration. Martin Hora of Charles University in Prague and his collaborators recently demonstrated that Homo erectus would have been able to persistence hunt for approximately five hours in the hot savanna before losing 10 per cent of its body mass. In humans, 10 per cent body mass loss from dehydration is generally the cut-off before serious risk of physiological and cognitive problems or even death occurs. Beyond that point, drinking becomes difficult and intravenous fluids are needed for rehydration.

Our vulnerability to dehydration means that we are more reliant on external sources of water than our primate cousins and far more than desert-adapted animals such as sheep, camels and goats, which can lose 20 to 40 per cent of their body water without risking death. These animals have an extra compartment in the gut called the forestomach that can store water as an internal buffer against dehydration.

In fact, desert-dwelling mammals have a range of adaptations to water scarcity. Some of these traits have to do with the functioning of the kidneys, which maintain the body’s water and salt balance. Mammals vary in the size and shape of their kidneys and thus the extent to which they can concentrate urine and thereby conserve body water.

The desert pocket mouse, for example, can live without water for months, in part because of the extreme extent to which its kidneys can concentrate urine. Humans can do this to a degree. When we lose copious amounts of water from sweating, a complex network of hormones and neural circuitry directs our kidneys to conserve water by concentrating urine.

But our limited ability to do so means we cannot go without freshwater for nearly so long as the pocket mouse.

Neither can we preload our bodies with water. The desert camel can drink and store enough water to draw on for weeks. But if humans drink too much fluid, our urine output quickly increases. Our gut size and the rate at which our stomach empties limit how fast we can rehydrate. Worse, if we drink too much water too fast, we can throw off our electrolyte balance and develop hyponatremia, abnormally low levels of sodium in the blood, which is just as deadly if not more so than dehydration.

Even under favourable conditions, with food and water readily available, people generally do not recover all of their water losses from heavy exercise for at least 24 hours.

And so, we must be careful to strike a balance in how we lose and replenish the water in our bodies.